Bharat central to the Indo-Pacific region 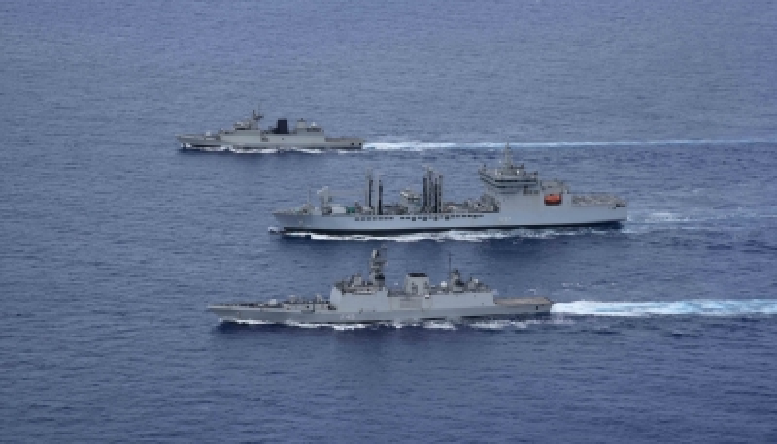 The importance attached by the US to the Indo-Pacific, places Bharat at an advantageous position, both in defence and economic sectors.

While the world was combating the Covid pandemic, international leaders were also busy in realigning the world as per their country’s priorities and goals. One region, which has emerged on the top of this new realignment, is the region of the Indo-Pacific.

The Indo-Pacific comprises the Indian Ocean, the western and central Pacific Ocean, and the seas connecting the two oceans around parts of Indonesia. The term “Indo-Pacific” gained usage in geopolitical discourse after 2011. It is also described as a substitute for “Quad” or the Quadrilateral Security Dialogue, an informal grouping of like-minded democracies in the region, comprising Australia, Japan, Bharat, and the United States.

Historically, “Indo-Pacific” was first used by the German geo-politician Karl Haushofer in the 1920s in his academic work “Indopazifischen Raum”. But its security aspects emerged in early 2000s, when the analysts began to observe the ‘security’ linkage between the two Oceans.

In this context, the term was first used in an article authored by Gurpreet Khurana, carried in the January 2007 issue of the Strategic Analysis journal titled “Security of Sea Lines: Prospects for India-Japan Cooperation”. The author refers to the ‘Indo-Pacific’ as the maritime space stretching from the littorals of East Africa and West Asia, across the Indian Ocean and western Pacific Ocean, to the littorals of East Asia.

Former Japan Prime Minister Shinzo Abe expanded on the spirit of the term in his speech to Bharatiya Parliament in August 2007 when he talked about the “Confluence of the Indian and Pacific Oceans” as “the dynamic coupling as seas of freedom and of prosperity” in the “broader Asia”.

American push for the Quad

Quad was first floated in 2004 to manage disaster relief after the Tsunami. Later, Dick Cheney tried to redefine it as a military club, to counter Chinese influence, but was abandoned in 2010 as Bharat and Australia didn’t wanted to ruffle the Chinese feathers. The Trump administration revived the regional grouping in 2017, ostensibly to counter China in the region, particularly in the South China Sea, where the Chinese have continually challenged the Japanese and Americans.

US under Trump wanted to shape the Quad into an Asian NATO, a point that has been raised and challenged by the Chinese again and again, as they see it as a potential defence deterrent in the region. The importance being attached to this by the original members, and the recent desire expressed by the British and French to join also underlines both its economic and defence utility. Though the Biden administration wants to position it as an American outreach on trade, immigration, public health, climate change, yet its security aspect can’t be overlooked.

To give a boost to the alliance, the leaders of the Quad met on March 12, 2021 through a virtual summit. The summit and the joint statement issued highlights the evolution of the grouping and its agenda made clearer and resolve by the member states to sustain the momentum.

At a White House press conference following the summit, the U.S. National Security Advisor Jake Sullivan noted that each of the four leaders present had described the meeting as “historic.”

Quad talks were elevated to the ministerial level in 2019 with foreign ministers from all four countries holding a meeting on the margins of the United Nations General Assembly session in New York in September that year. Since then, Quad foreign ministers have met twice: in-person in Tokyo in October last year, and virtually last month.

President Biden has zealously endorsed the “free and open Indo-Pacific” jargon favoured by his predecessor, contrary to apprehensions that he would seek to adopt a softer line toward China and that the Indo-Pacific paradigm would not be so significant for the new administration.

However, the reality is that the Quad, in essential sense is not a formal alliance, yet. The recent summit concentrated primarily on urgent global catastrophes comprising coronavirus and the climate emergency and tried not to ruffle feathers or cause undue apprehensions in the regional countries, particularly ASEAN member states.

A joint statement after the assembly noted that the four nations would collaborate to increase Covid vaccine production, in which Bharat would be helped financially by other members to boost its vaccine production base. But differences remained among the member states on how to handle China.

Bharat’s future in the Quad

The moot question is whether Quad in essential sense would be transformed into a real regional alliance or will it continue to serve some countries only, to use it as and when required as per their necessity.

Though one country, which seems poised to gain most out of Quad is Bharat. Due to its vast market potential and also as a counter to China in the region, most western powers attach great importance to it in the region. Bharatiya leaders also realise this besides the fact that to transform into a regional power it has to pursue a geopolitical strategy, which maximises its economic interests and security.

The Bharatiya Prime Minister has spelled out Bharat’s vision of Indo-Pacific as an enabler for “a common pursuit of progress and prosperity… not directed against any country… (albeit based on) our principled commitment to rule of law.”

Bharat’s role at the Quad seems central to the Biden administration’s plans for the region and the quest to counter China. US initiatives so far suggests the Biden administration is serious about its stated intention to counter China through alliances, based on shared values, and that it sees the Quad and Bharat as central to that. At the same time the US seems ready to moderate Bharat’s feeling of insecurity in regard to be part of a binding alliance along with its ambition to emerge as a dominant regional player, while downplaying China.

It seems that the US wants to promote bilateral ties by bolstering Bharat at the Quad, and also focusing on more areas of cooperation, which were ignored during the Trump regime. The recent visit of the US Defence Secretary Lloyd Austin to Bharat demonstrates both these aspects.

With Tony Blinken at the State Department and Jake Sullivan at the National Security Council, as well as Mr Biden himself, the current US administration possesses more experience of dealing with Bharat than any of its predecessors. It also highlights its resolve to make Indo-US relations as central to its plans. With China as a common denominator, the relationship holds more chances of being robust and fruitful for both.

And the key role, which the US wants Bharat to play at the Quad, is more apparent now. It may also open the doors for increased bilateral cooperation and sale of more American military hardware to Bharat besides economic benefits.