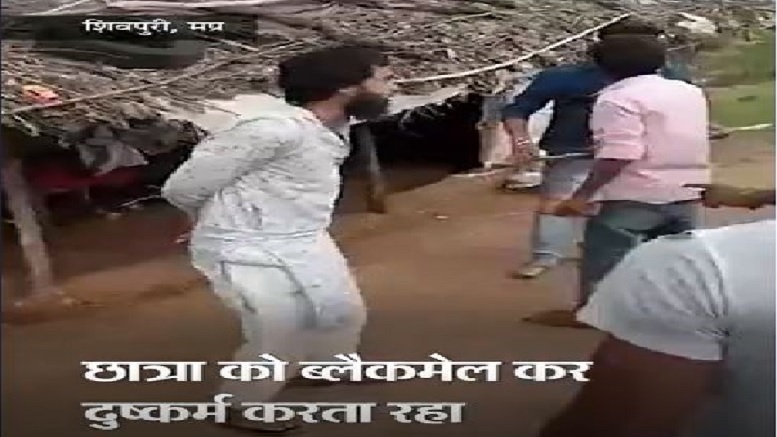 A case of rape and blackmailing of a Class 11 girl student has come to light in Badarwas police station area of Shivpuri district, Madhya Pradesh. The villagers caught hold of the accused Nadeem Khan and after tying his hands behind his back, they thrashed him with sticks. He was later handed over to the police. Police have registered a case against the accused under Sections 363, 366, Rape 376 and 506 IPC, 5/6 POCSO Act and 3(1) (W-2)3 (2) (V).

The 17-year-old minor girl from a Hindu SC community told police that she used to come to Badarwas to study. Sometime in January, she met 24-year-old Nadeem Khan at the bus stand. Nadeem got friendly with her and gave her his number and the two started talking. On March 1, he lured her and took her out to a picnic spot called Bharka Salon. Nadeem later raped her there.

He then started calling her incessantly threatening her to submit to his sexual demands. The student says Nadeem took her to Bharka Salon on August 8 and raped her yet again. She was blackmailed and threatened, and called for the third time on September 9.

When Nadeem arrived with the girl this time at the spot, villagers noticed their actions with suspicion. Accosting them, the villagers were outraged when the girl broke down and shared her ordeal. Angry villagers then tied Nadeem’s hands with a rope and proceeded to thrash him. Some people made a video of the beating of the rapist.

Later someone informed the Police and police registered a case under sections of SC-ST Act, kidnapping, rape & POCSO against Nadeem Khan.