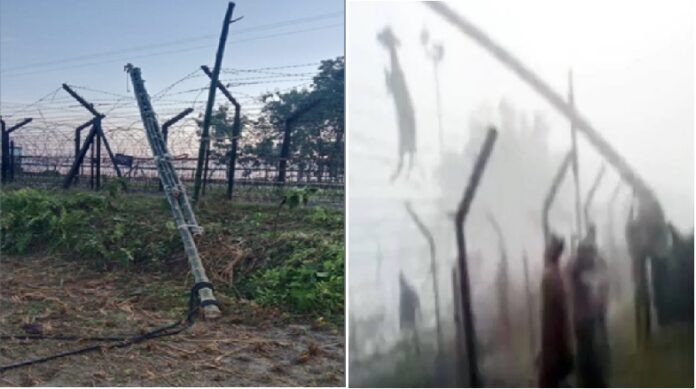 Two Bangladeshi smugglers were killed early Friday when Border Security Force (BSF) personnel opened fire after smugglers failed to heed a warning and instead tried to attack the BSF. The incident occurred at the Bharat-Bangladesh border in West Bengal’s Cooch Behar district.

As per an ANI report–

“The incident took place around 3 am. One BSF troop was also injured in the attack by miscreants but his condition is stable and he has been evacuated to hospital. The BSF in a statement said that the “miscreants from Bangladesh side ventured into Indian territory and tried to smuggle cattle heads by establishing improvised bamboo cantilever”.

“BSF domination ahead of fence warned them to go back, but miscreants didn’t pay heed to BSF warning,” said the statement. It said that the BSF troops then utilised non-lethal munition to deter the miscreants, but they attacked BSF troops with iron dah and sticks.”

In self-defense, the BSF party fired back. Later on during search, dead bodies of two unknown smugglers were found between the border fence and International Boundary.

An old video shows how these makeshift cantilevers are used as cranes to smuggle cattle over the border fence in the most callous and inhuman way imaginable. Cows are strung by their necks to the makeshift crane and then pulled over the tall barbed fence, with a crowd of smugglers gathered on either side.

Another barbaric technique used by smugglers along the riverine border is to force cattle heads through banana tree stalks, tie their feet together, and set them afloat across the river to the other side.

The ruthless mafia involved in this cross-border racket steals cattle from as far as Rajasthan, West UP, Haryana etc, to supply the Bangladesh beef markets. Senior police officials have spoken of narco-terror connections of this illegal trade, which operates with blessing of ‘secular’ politicians all over the country.

Police is ill-equipped to tackle the mafia, and there have been dozens of cases of police being attacked in parts of Mewat, UP etc when they go to carry out raids on smugglers. Yet, when poor villagers organize self-defence teams to prevent their precious cattle, considered a family member by rural Hindus, being stolen, and if a smuggler dies at their hands, the entire left-liberal elite ecosystem brands them as ‘murderers and bigots’.

Several BSF soldiers, including senior officers, have been martyred or injured while battling these smugglers over the years. Yet, the secular Indian state imposes a strict escalation matrix wherein jawans have to first try non-lethal methods to deter the well-armed smugglers, even if it puts their own lives at risk. This excessive restraint which cripples our response against a ruthless enemy is largely due to the Bangladesh appeasement policy we follow.