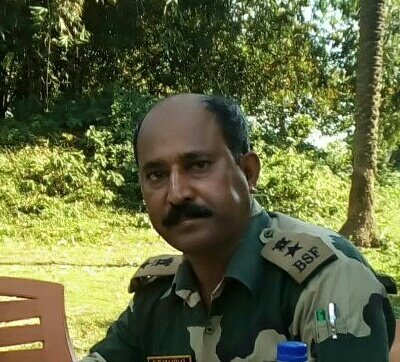 A senior Border Security Force (BSF) officer, deputy commandant Deepak Mondal of the 145th battalion, sustained severe injuries after a group of cattle smugglers attacked him in Tripura yesterday. Mandal was targeted after he intercepted a large group of smugglers carrying cows illegally into Bangladesh. The BSF officer’s condition in critical and he has been airlifted to Kolkata for medical attention. India Today has reported that Mondal, who was also the officiating in-charge of the 145 battalion deployed in Tripura, was travelling between different border outposts of the BSF to check the preparedness and the night domination drill when the incident took place. It was around 2 am when he saw at least 25 cattle smugglers and intervened.

While Mondal, his guard and the driver were waiting for reinforcement, the smugglers gheraoed them and beat them up. The 25-member gang was armed with sticks, bricks and machetes. The constable had to fire a few rounds in the air to disperse the mob.

The mob rammed their jeep into the BSF officer, which is why he sustained severe head and leg injuries

Why did AK-47 wielding Constable Not Fire On Smugglers?

There is a one-word answer to this million-dollar question – liberalism. Paramilitary forces like BSF, CRPF etc know that the hold of the liberal-secular mindset on our State Institutions is so powerful that they tread on egg shells when it comes to using deadly force.

Even in such a life-threatening situation, BSF Constable Chandrakant still didn’t feel empowered enough to fire at the smugglers, but only fired in the air. The India Today video embedded above provides the answer – BSF sources told the channel that in the past, when BSF personnel used force against smugglers, they themselves landed in the dock with their superiors and civil administration.

Our forces dread the following:

It is time that Home Minister Rajnath Singh truly reformed and empowered the forces responsible for our internal security.