Raees Khan murdered Dharmendra Chouhan over relationship with daughter, staged it as accident

In a chilling rerun of the Ankit Saxena, Khetaram Bheel, Rahul Rajput, and K Lakshmipathi murders, another Hindu youth, Dharmendra Chouhan (22), was killed by the father of a Muslim girl over a relationship between the two.

Dharmendra worked in a mall in Bhopal’s Shahpura locality and was allegedly returning after meeting the girl on August 29, when the father, farmer Raees Khan (36), first hit Dharmendra on the head with a stone  and made him unconscious. He then electrocuted Dharmendra using a high tension wire, dragged the body to the road, and toppled Dharmendra’s motorcycle to make it seem like he had been struck by lightning while driving.

Initially, authorities too were misled that a biker had been accidentally killed by a lightning strike with the head injury attributed to the ‘bike crash after the lightning strike’. 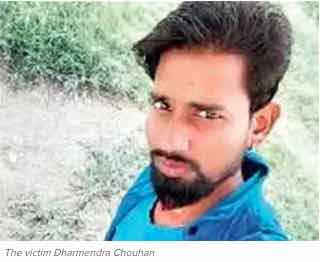 However, some things such as victim’s right hand being clenched and severely burned and lack of skid marks at the ‘accident’ scene didn’t add up, and police kept digging. Dharmendra’s family informed them that Raees was bitterly opposed to Dharmendra seeing his daughter and had even threatened to kill him if he continued to meet her.

“After getting the forensic reports, the theory of lightning was discarded and the affair angle, which was alleged by the victim’s parents, was investigated,” said ASP Dinesh Koushal. Police had their suspicions, and began gathering evidence, said Gunga SHO Ramesh Rai, who investigated the case.

“It took four months to collect evidence, like wires and other equipment used in the crime, and to take statements, but we finally registered a case on January 2 and arrested Raees,” said Rai. The ASP said all the equipment used by Raees in the crime has been confiscated.”

Four months after the murder, Raees Khan has been booked for murder and disappearance of evidence.

So while Lutyens’ intelligentsia cries itself hoarse over the ‘targeting/lynching of Muslim men’ and dismiss the disturbing phenomenon of grooming / sexual predation (colloquially known as Love Jihad) as a ‘hoax’, the truth is that often it is Hindu youth who are brutally murdered at even the slightest hint of suspicion of their romantic involvement with a Muslim girl.

Even if there is no deceit involved in such relations, no hint of abuse or forced conversion, the chatterati remain unmoved and no one preaches tolerance or syncretism to the ‘minority’ community.