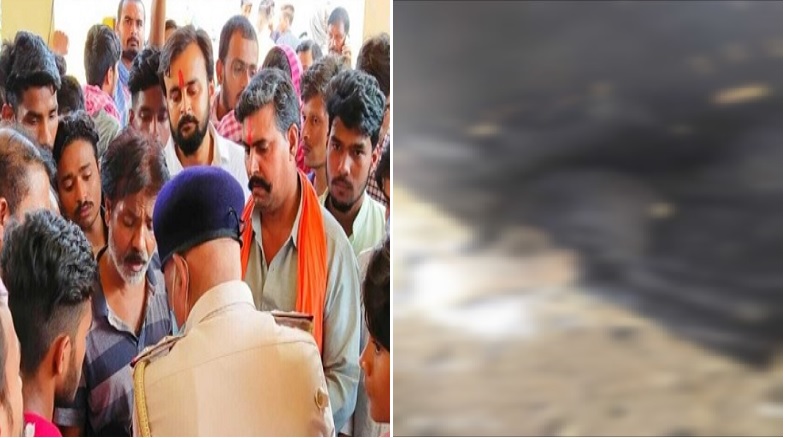 In Patna, three pregnant cows belonging to a dairy farmer named Rajesh Kumar Gond were charred to charred to death after his neighbor Mintu Qureshi allegedly set the cow shed on fire. Rajesh said that Qureshi carried out this inhuman incident due to prior animosity and hatred. Locals allege that police initially tried to hush up the incident by refusing to file an FIR but were forced to after Shri Ram Sena members picked up the issue.

The gruesome incident occurred in the Karbhigya Chota Masjid, Jakkanpur police station area of ​​Patna. Rajesh has been running the gaushala for 3 years behind the masjid. Qureshi, who himself keeps goats, used to argue with Rajesh alleging that cow dung from his gaushala dirties the area. Qureshi’s father, Moeen, and his mother too would pick up arguments and hurl abuses at Rajesh, threatening him to remove the cow shed.

Yash Raj Singh, President of Shri Ram Sena, Patna said that a few days ago there was an argument between the Rajesh and the Qureshi family, where Mintu Qureshi threatened Rajesh to remove the cowshed or he would take some ‘big step’.

Last Thursday, Rajesh went to bed after feeding his cattle. Around 6.30 AM next morning, some locals informed him that his cowshed had caught fire. He rushed there only to see the charred remains of his cattle.

Three of his cows, 2 of which were 2 years old and one that was 2.5 years, were all dead. All the 3 dead cows were pregnant. His barn, table, door and fodder were all reduced to ashes. Rajesh suffered a loss of 2.5 lakh rupees and is now unsure as to how he will earn a living. Rajesh is convinced that Mintu Qureshi, his mother and other family members have carried out this ghastly crime.

Astonishingly, Qureshi is part of a family of 56 people and except 4 or 5, the rest have all gone missing. They have even taken their goats with them and are nowhere to be seen. Some locals say Qureshi’s nephew was seen bringing petrol shortly before the incident, but this has not been confirmed by police.

Yash Raj said that originally the police were reluctant to register a complaint but changed their mind when Hindu organizations gathered and exerted pressure on the local administration. Finally, an FIR was registered in the case on Sep 12th. Neither Qureshi nor anyone from his family have been arrested.