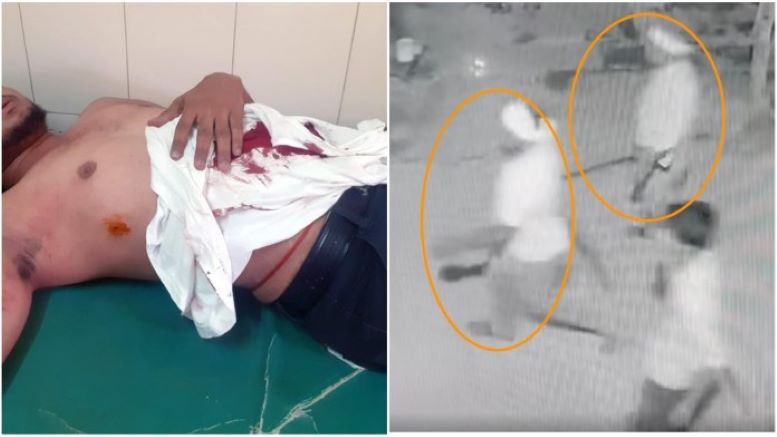 An Islamist mob stabbed Hindu youth Dileep Malagimane for his WhatsApp status allegedly supporting the ban on Hijab. The incident took place on Wednesday at Davanagere District’s Malebennur town where a mob comprising of 300 Islamists attacked Dileep who runs a store in the town’s Gigali circle.

As per reports, Dileep was brutally assaulted after being dragged out of his store by the Islamists. Even police officials were manhandled and attacked by the enraged mob when they arrived at the scene to rescue the victim. A case has been registered against the mob and some of them have been taken into custody by the police. Prohibitory orders had been put in place till Friday (Yesterday) night in the entire Harihar Taluk where Malebennur town is located.

A similar incident was reported from Davanagere District’s Nallur village where an Islamist mob attacked 25-year-old Naveen and his 60-year-old mother Sarojamma and ransacked their home allegedly for their social media posts on the Hijab row. Footage of angry Muslims carrying weapons and approaching Naveen’s home have been captured in the CCTV.

As per available information, Sarojamma and her son sustained severe injuries and hence have been shifted to a Shimoga hospital for treatment. The incident led to tension in the village following the local MLA and police officials reached the spot to appeal for calm.

Deputy SP Basavaraj appealed to the people not to take the law into their hands while adding that police would take action against those violate the law. The police have deployed more security to keep the situation under control.