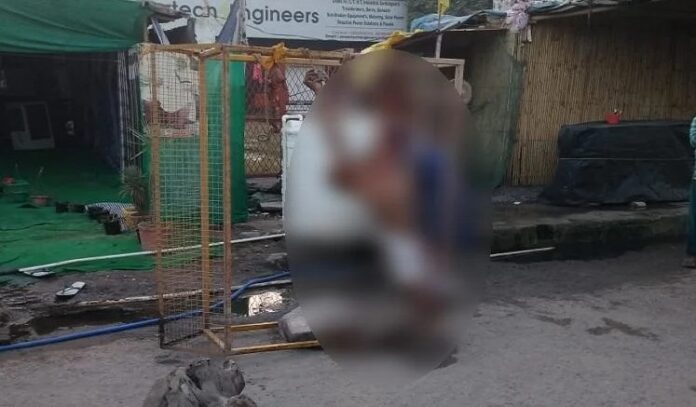 A man in his 30s has been brutally maimed and killed near the ‘farmers’ protest site in Kundli, Delhi-Haryana border. It is suspected that he was killed by Nihang Sikhs for allegedly committing ‘blasphemy’. The victim has been identified by Haryana Police as Lakhbir Singh, ‘a 35/36-year-old labourer from Cheema Khurd village, Tarn Taran district’. He belonged to a Scheduled Caste community.

The FIR filed by ASI of Kundli police station says that they received news around 5 AM today that Nighangs had cut a man’s hand and hung him from a barricade at the protest site. When the police team reached, they found a crowd of Nihang Sikhs gathered around the victim who had passed away by then, the FIR states. When police tried to question them, no one cooperated.

Lakhbir was thrashed brutally and dragged before being killed. His body was hung from a barricade near the main stage of the Samyukta Kisan Morcha. One hand was chopped off at the wrist and hung separately besides the body, and a leg was cut off too. Lakhbir is survived by his widow and two children.

There are rumors floating that the man was paid a sum of money to go and ‘defame the protest’ and desecrate the Sikh holy book. When he was ‘caught’ by the Nihangs, they questioned him and then murdered him. Blood-curdling videos show the badly injured man lying on the ground while Nihang Sikhs are questioning him (warning: disturbing images)

Nihangs are an armed Sikh warrior order that traces its origin to the creation of the Khalsa by Guru Gobind Singh in 1699. They are distinguished by their blue robes, decorated turbans and are often seen carrying weapons like swords and spears. Many Nihangs consume  cannabis, purportedly to help in meditation, which they also call Sukha parshaad “Dry-sweet”.

This brutal murder shows just how lawless these so-called farmer protests have become. A poor SC (aka ‘Dalit’) man, most likely a Hindu, was brutally murdered by Sikh extremists – imagine if something like this had happened in UP and the perpetrators were general category Hindus. Media would have gone ballistic, Opposition leaders would be making a beeline for the spot and the SC would have jumped in to take suo motu cognizance.

Nihangs have a history of unprovoked or sudden attacks using swords.

During the violence unleashed in Delhi by ‘farmers’ during the tractor rally held on January 26, Nihang Sikhs armed with spears and swords led the charge to disperse police manning the barricades at Singhu and Tikri borders. A Nihang Sikh was captured on video attacking a policeman with a sword. Nihangs were also seen waving their swords from the dome of the historic Red Fort which was stormed and vandalized by protestors. Over 400 police personnel were injured and 30 police vehicles were damaged that day.

In April, a Nihang Sikh attacked Dharmesh Kumar and Sunny who were travelling by bike with a sword near the Singhu (Kundli) border – Dharmesh suffered a deep cut to his hand, and injuries on his shoulder and back. There have been reports of other tussles between Nihangs and locals during these protests.

In March, a Punjab Police team received information about two Nihang Sikhs suspected of committing a murder in Maharashtra’s Nanded district being holed up in Tarn Taran district. When a police team tried to arrest them, the Nihangs attacked them, chopping off hands of two policemen, before police shot them dead. During last year’s lockdown, Nihangs crashed into a police barricade in Patiala and chopped off the hand of an ASI. Eleven Nihangs, including a woman, who had holed up in a Gurudwara were later arrested for this horrendous attack.

Yet, Nihangs are being glorified as “protectors of farmers from violence as protest sites become the new utopian civil societies” by left-liberal propaganda outlets like The Citizen, which is run by President of Editor’s Guild of India, Seema Mustafa.

For months, multiple reports have shown how these 4 protest sites at Delhi’s borders have become hubs of alcohol/drug abuse and prostitution. In June, farmer Mukesh Kumar from a village near the Tikri protest site was burnt alive allegedly to send a message to Brahmins to take part in the protest or face similar consequences.

In April, a girl who had come from Kolkata to join these protests was gang-raped by some AAP leaders and other protestors. The matter was hushed up and the girl died within a week due to Covid-19. Likes of Yogendra Yadav were allegedly involved in the cover up, but have escaped prosecution.

From the outset, it has been clear that these protests have been hijacked and infiltrated by hard-core Khalistani separatists. Khalistani instigation was behind the the Lakhimpur Kheri incident as well.

And on top of this we have the massive inconvenience caused to thousands of ordinary citizens living in the area along with the severe economic losses caused by these lawless, maximalist protests launched by a socio-economically powerful section of farmers from Punjab and Haryana who are threatened by the disruption of status quo which the new laws will bring.