Girl gang-raped by AAP leader and others at Tikri protest site, later dies of Covid-19 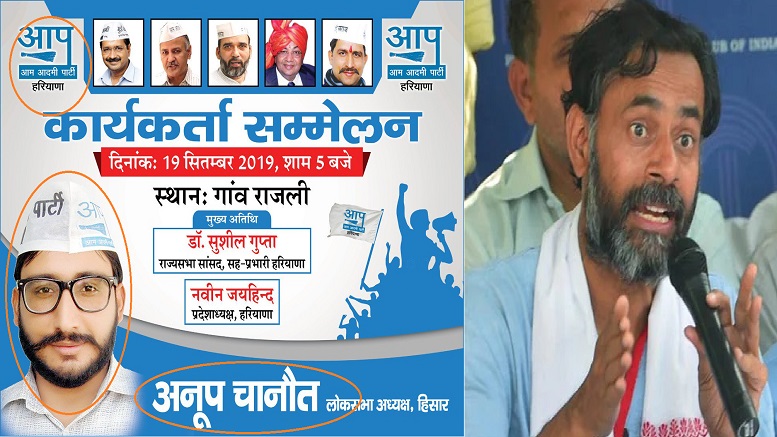 On the 30th of April, a 25-year-old Covid positive woman died at a hospital near Jhajjar at the Tikri border in Haryana. She had also been allegedly gang-raped while participating in the anti-farm bill ‘protests’. The woman on her death bed had informed her father about the rape, and police are on the lookout for a group of four men and two women belonging to the Kisan Social Army.

The accused including Aam Aadmi Party (AAP) leader Anoop Singh Chanot are on the run. Anoop was the losing candidate from Barmala who represented the AAP in the Haryana assembly elections conducted in 2019. Another accused, Anil Malik is said to be a local AAP leader from Delhi. Other than the rape charges, the accused have been charged with kidnapping, blackmailing, and intimidating a hostage.

It has now become clear that ‘Andolan jeevi’ Yogender Yadav knew about the plight of the lady since April 24th before she was admitted to the hospital on the 26th of April. He is now accused of intentionally hiding the rape from the police selfishly fearing that such unwanted attraction might jeopardize his ‘farmer protests’.

Attracted by anti-establishment ‘leaders’ like Yogendra Yadav and other AAP leaders, many, including women, have been arriving at the Delhi border to join misled farmers, middlemen and dubious agenda-peddlers agitating against the much-needed new farm laws. Their agents disguised under various names have been scouting for volunteers to join them and have been raising money for their cause.

Anoop, Anil, Ankur Sangwan, and Jagdish Brar, along with two women Yogita Suhag and Kavita Arya toured West Bengal last month. They called themselves the Kisan Social Army. Though they belong to different political outfits and backgrounds, they are all members of the Samyukt Kisan Morcha. The rape victim fell for their charm and decided to join the protests.

No sooner had the victim boarded the train than her troubles began. She called her father and informed him that both Anil and Anoop were sexually misbehaving with her. Having admonished them for trying to kiss her when everyone else had slept, the assailants turned to blackmail her. They forced themselves on her while they were on the train and the sexual assault continued at the protest site, where she was forced to share a tent with them.

They reached Tikri on the 11th of April from Howrah along with other volunteers. From the charges filed, the criminals almost held her hostage and assaulted her. The lady informed her father who advised her to inform other women present there. The lady tried to inform Yogita and Jagdish about the rape on April 16th. Suspiciously they did not inform the police.

The torture continued and the next day the victim started bleeding while urinating. Yogita took a video of the victim where she spelled out the atrocities and forwarded it to the victim’s father. Even then nothing happened and it was only the next day that she was moved to an all-woman one! No medical help was sought or solicited till much later.

By 21st she had a mild fever, a big warning sign of a Covid-19 infection yet she was not tested. Her condition worsened by the 24th. Speaking to media, Yogendra Yadav claimed this is the first time he got to know about the girl, her medical condition and some hint that she was being harassed. He says that their group determined that there was no medical emergency and the girl could be taken to hospital the next day, on 25th.

But on 25th they would found the girl missing from the protest site! Yadav says he received a message from the girl’s father that she was being taken somewhere. He called the girl on her phone, and she was in a car with Anil and Anoop. They claimed they were taking the girl back to Bengal and had crossed Agra. But sensing something wrong, Yadav says he asked the girl in Bengali to WhatsApp her current location. It turned out be near the town of Hansi, Haryana. He then called the men and asked them to immediately return to Delhi with the girl. They brought her back by the night of the same day and dropped her on Tikri border. Yadav did not clarify why the two were not restrained then and there by the protest leaders and police informed, seeing how they had lied about their location and as the girl had indicated they were up to no good.

The girl was finally admitted to a nearby hospital on 26th evening! Her father rushed to Delhi and arrived on the 29th, but she passed away on the 30th. Even after her death, the protestors took out a procession with her body, trying to milk it for political capital, knowing full well that she was infected with the virus and this was against protocol. If this is not anarchy, then what is?

Haryana Congress leaders like Vidya Rani were heard openly appealing for aid in the form of cash, food and alcohol to distribute among protestors. Speaking at an apparent drive to collect funds for the anti-farm law protests, she said that the Congress’s existence was in question in Haryana after the last polls, and that this farmer stir is the perfect opportunity to revive their party in the state. When someone mentions that the video might go online advising her to change to ‘dava daru’, she laughs and asks why not liquor?

This just shows the duplicity of parties who had proposed the very same reforms when in power or in their manifestoes, are have now jeopardized the lives of millions through this super-spreader, sham of a protest.

The ‘Kisan” cabal made sure that a rape victim did not receive proper medical care when she needed it the most and did their best to delay the same. The cult then tried to hide the rape from both the public and the police.

Statements from organizations associated with the protests did not come as confidence boosters and hinted at a parallel system of governance, in and around the protest sites. Samyukt Kisan Morcha said that it had decided to take action against the Kisan Social Army. How they achieved it is even funnier, by removing their tents!

Another leader from the Punjab Kisan Union, Jasbir Kaur who was in contact will the dead lady said that the farmers will investigate and ensure that rapes do not happen again. What about justice for the rape victim who was pleading with him for help till last week? His statement also shows a lack of respect for the law and its enforcers.

Astonishingly it is the silence from the Home Ministry, the international and national media, the various women’s rights groups, feminists, the various political outfits, and the supporters of the farm-laws protestors that is deafening.