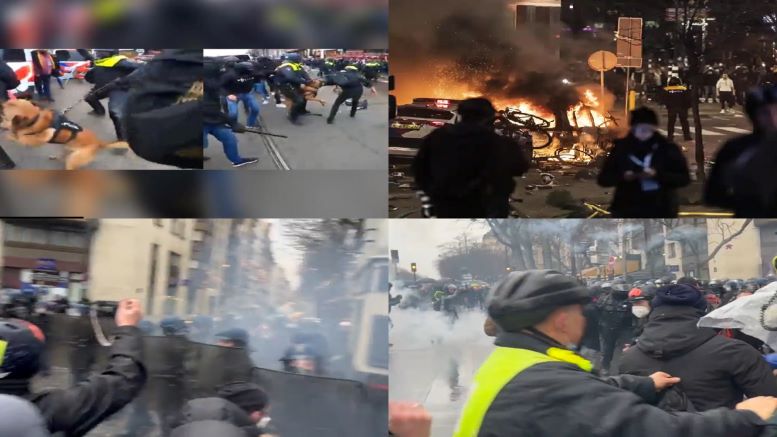 As anti-Covid protests intensify across the western world, instances of police brutality have been increasingly coming to the fore. Be it France, the Netherlands, or Australia, those citizens raising the flag of protests are been subjected to exceptional brutality in order to silence them.

In France, cops were seen cracking down on protestors using tear gas. They also used batons against anti-vaccine passport demonstrators.

The Netherlands too witnessed similar scenes as the government imposed more lockdown measures and vaccine passports. The police brutality here was taken a notch up as protestors were attacked by police dogs. “The cops sent in dogs to help officials put an end to the protest. A video circulated on the internet where one man attempted to flee a police dog that bit his hand. People were outraged on the internet, calling it the brutality of the police against peaceful protesters”, reported The Republic World.

“This is Amsterdam, Netherland where the Govt imposed more lockdown measures and vaccine passports. They banned protests and are using the police to attack protestors. Tyranny is the new Democracy”, tweeted a user Robert Sapiro on the January 3 incident. Besides dogs, the protestors were also lathi-charged using batons as was evident from the video doing the rounds on social media.

Clashes between police and protestors have been reported from several cities across Australia. Around 270 people have been arrested in connection with the protests. Earlier, it came to light that water cannons and tear gas were used to subdue demonstrators in Belgium.

The West never loses an opportunity to lecture Bharat despite violence on the part of the protestors as was seen during the farmers’ protest which the Bharatiya government dealt with kid gloves in comparison to the brutality unleashed by governments in western countries. The restraint showed by Bharatiya police even as sword-brandishing protestors went on a rampage at Red Fort on Republic Day last year is worth appreciation.

The Western media has also time and again come to the fore and it uses every trick in its book, from hiding facts to downright spreading fake news, to discredit Bharat. However, the excesses by the west are simply brushed under the carpet. This bias, (read hatred) is amplified by the fact that a party and leader it considers to be a Hindu nationalist has returned to power.

The ‘developed’ West finds it difficult to digest the fact that a ‘developing’ Bharat has handled the Chinese Virus pandemic in a much better manner than it did. In fact, Bharat not only helped its citizens but also provided aid to several nations. The pandemic came as a perfect opportunity for the western media to indulge in ‘tragedy porn‘, while protests such as the anti-CAA and farmers’ ones were leveraged by them to portray how Bharat didn’t care for its own people. However, the horrific scenes of protestors being subjected to excessive brutality emerging from across the western world serve as a reminder that the west should first clean up its own backyard before feeling the need to lecture Bharat.