The subtle art of not giving the facts : a case study of an NYT article on farmer protests 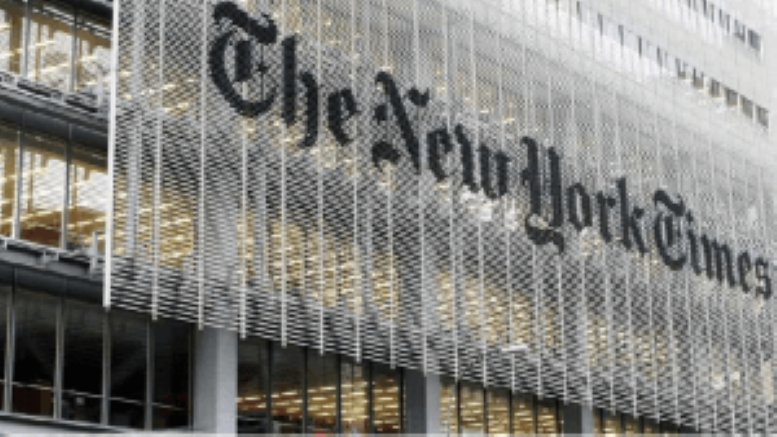 The farm laws and the protests against the same have generated a lot of commentary in the national and international media. An article titled “Modi’s Response to Farmer Protests in India Stirs Fears of a Pattern” has appeared in the New York Times yesterday. It would be instructive to analyse the article to know how a narrative divorced from facts is created and propagated.

New York Times and its writers

But before that, what motivates the NYT to write such pieces? Why does it cover the issues from a certain ideological standpoint? The resignation letter of Bari Weiss, who was the op-ed staff editor and writer about culture and politics at NYT from 2017 to 2020, might give some insight into what goes on inside NYT. She writes that in the NYT “Stories are chosen and told in a way to satisfy the narrowest of audiences.” One can imagine which audience this is. A journalist not in sync with the ideology of the paper, Bari wrote about the behaviour of her left wing colleagues who made her “the subject of constant bullying” and branded her “a Nazi and a racist” despite her being a Jew! We can see parallels with the Bharatiya leftists here.

Weiss says that so much is the emphasis on narrative that even facts are ignored and the paper has become the “the record of those living in a distant galaxy, one whose concerns are profoundly removed from the lives of most people.” The piece we seek to discuss would amply demonstrate this.

How to build a narrative

The article starts with the victimhood narrative complaining of the “accusations of foreign infiltration” “police complaints against protest leaders“, “arrests of protesters and journalists“and “blocked internet access“. However the writers, Mujib Mashal and Sameer Yasir, fail to mention that foreign infiltration charge was made not only by ruling party, but also opposition Congress Party leader and CM of Punjab, Amarinder Singh. Similarly, the police complaints against protest leaders are for violating laws which were broken on 26th of January, when violence rocked the capital of Bharat. I am sure Capitol Hill riots are being investigated in similar spirit. As for the arrests of protesters and journalists, only a few violent protesters have been arrested, and only the journalists spreading fake news to instigate people have been arrested. The internet access is being blocked in a small area to maintain law and order and people are still free to move around those places.

The authors insert the reference to “citizenship laws that disadvantaged Muslims” and “clampdown on the disputed Kashmir region” to reinforce their claim of increasing authoritarianism. Although, there is no citizenship law in Bharat that actually disadvantages Muslims and the actions in Kashmir region are what any sovereign nation would do to protect its integrity. In any case, Kashmir is not a restricted area and has recently seen grassroots elections conducted in a peaceful manner with wide participation!

The authors then quote one Prof. Gyan Prakash of Princeton University. This is the classic “appeal to authority” argument, where the good professor is supposedly a neutral arbiter of truth. But is he neutral? Below is the tweet he posted when Supreme Court cleared the pathway for building new Parliament and Central Vista.

Clearly, any rational being would agree that according to the good professor, BJP is certainly not a good political party. Visit his twitter profile for a minute and all delusions of his neutrality would disappear.

Coming back to the article, Gyan Prakash compares current government with the emergency period imposed by Indira Gandhi and says that the current government is “even more damaging to whatever remains of democracy in India” This is a loaded statement with no facts behind it whatsoever. If anything, media continues to be vocally opposed to the ruling party, and freely so. On social media, the most criticized person in Bharat is Narendra Modi and has been so for many years. The courts continue to be independent and often give judgments against Mr. Modi’s govt.

In the January of 2019, Prof. Prakash predicted that in 2019 elections, we would see the replay of 1977 elections i.e. ruling party being electorally decimated. He had even then claimed that Bharat was under “undeclared emergency” in the run up to the elections. We can understand how deeply he understands Bharat, its conditions and its people by the results of those elections. In the current article he says ” “Critics often call it an‘undeclared emergency'”. Clearly, when he says critics, he is referring to himself! No wonder he was the one chosen to comment in the NYT.

The authors of the NYT article then claim that on television channels, “critics choose their words carefully.” I am not sure what news channel he watches, but it is common for news channels to show people praying for death of Modi, or threatening to kill him. There are people in Bharatiya media like Ravish Kumar and Rajdeep Sardesai, whose career is built on criticizing Modi.

Further in the article, the authors have a problem if any cyber criminals or trouble makers find their activities mentioned in the police verification report for the purpose of arms licence, passport, govt job etc. Any efficient govt would not risk giving firearms to people who make irresponsible comments on social media, however this seems lost on the authors!

The authors then claim that farmers were sitting peacefully at borders of Delhi and now govt wants to derail movement as their “tractor procession” had “turned chaotic and violent last week” as if farmers had no agency and no responsibility for the events of 26th January. They then say that “officials quickly used it as evidence” referring to the violence, to try and dismantle the protest and that it “was part of a government conspiracy to derail their movement“. The transition from this being the claim of farmers to the authors peddling it as truth is so subtle that one admires the skill of the writers!

I could go on and on, but till now I have reached only the middle of the article and I am afraid that Brandolini’s law is true. So, let us now see the material facts that the authors have failed to mention in their article.

The facts not given

The authors did not mention that the farmers are protesting to continue the practices that have destroyed the ecology of Punjab and Haryana. The water table is depleted probably beyond repair, the soil is polluted, the air pollution problem in Delhi is in some part due to the stubble burning and the excessive use of fertilizers have made Punjab the cancer capital of Bharat. Such is the confidence of farmers in the quality of their produce that they themselves prefer eating MP grains!

Secondly, the authors do not mention the misleading and false campaign against the companies of Bharat by the communist leaders in the garb of farmers. In fact the word “communist” is not even mentioned in the article although many major leaders of the agitation like Yogendra Yadav, Darshan Pal, Hannan Mollah etc. are communists!

The resultant violence and damage to property of certain companies in Punjab is not mentioned. For the writers, damage to more than 1800 telecom towers and theft of their generators is probably “peaceful”, although any rational person would say otherwise. The writers fail to mention that almost 400 policemen have been injured in the “tractor procession” of farmers in which tractors were used as battering rams and weapons to crush police. The use of swords to attack policemen probably escaped their attention.

Further, the hand of Khalistan supporter terrorist organisations is evident in the movement. One just has to see the statement of Sikhs for Justice and check the recent document leaked unintentionally by Greta Thunberg to get a confirmation.

The efforts of government to engage the farmers have not been mentioned at all in an article which claims to detail the manner in which govt is treating the protests! That there have been 11 rounds of talks in which govt agreed to all their initial demands including on MSP and stubble burning, offered to amend the laws if farmers point out any issue with any clause and even suspend the laws for 1-2 years while both sides talk it out! All this is part of how Modi has dealt with the protesters and none of this makes to the article of NYT!

Then there is the issue of farmers who have supported these laws. The agitating farmers are a minority, although a vocal one, and are limited in geographic spread. Their seemingly limitless resources and geographical proximity to Delhi has enabled them to hijack the narrative, but the fact is that hundreds of farm groups from across the country support these laws! Even many of those protesting fought for these laws and initially welcomed the same, but then politics happened.

In conclusion, the article on the farm laws and treatment of farmers by Modi in the NYT leaves out much more than it reveals and that too in a biased manner. This half baked analysis of the issue would be shared widely and be the basis of further misinformation. The question is what are we going to do about it?