The China-Russia embrace and its ramifications 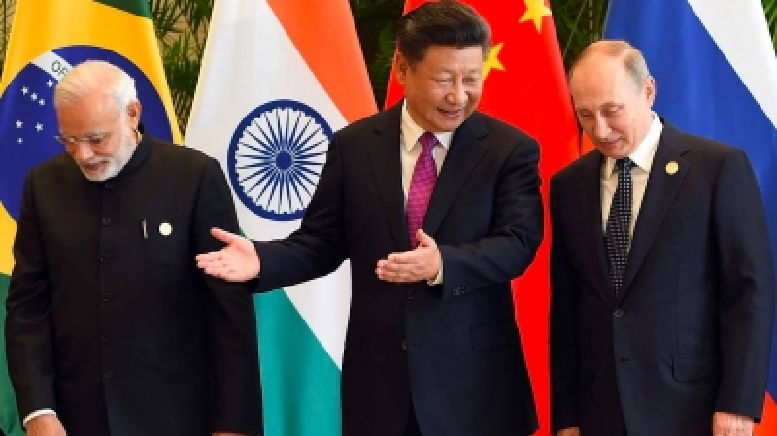 As the Russian China embrace tightens and a recalcitrant  President  Biden keeps trumpeting about the Ukraine invasion  which has still not happened Bharat’s  diplomacy is treading on thin ice and will have to do a fine balancing act lest it falls into a Russian or a US trap.

External affairs  minister Jaishankar did just that in Melbourne when he prevailed upon quad nations to stick to their agenda and not mention Ukraine in their joint statement.

The task is cut out for him and Bharat  as the world  order is changing with new permutations  and combinations emerging rather rapidly for Bharat’s liking.

As Zelensky keeps up the ante on  NATO membership with President  Biden egging him on Putin’s  patience is being tested to the hilt. With 1,30,000 Russian  troops encircling Ukraine everyone is watching  with baited breath as to who will pull the trigger.

If Ukraine decides  to enter the NATO fold Putin will strike immediately unmindful of the prolonged sanction threat from the west. This could be quickly followed  by the takeover of Taiwan by China which is Russia’s new ally currently. Biden’s weakened Presidency has been on display in Afghanistan and his policy of no American boots on foreign  land makes US superpower status mirage like.

The new alliance  of Russia and China with Pakistan  in toe seems indomitable  and poses a big challenge  to Bharat,  the US and a fractured NATO. The new bonding with China suits Russia as it will open up trade channels and provide a market for Russian natural  gas in case of a US embargo. China  also has nothing to loose as it could sneak under the world’s eye which is focused on the Russian US stand-off and launch a swift assault to annex Taiwan.

The China Russian  tango could embolden the dragon to make inroads in the northern  and Eastern  sector on our borders as it did in 1962 when the whole  world was concentrating on the Cuban crisis.

Pakistan is making the most of this coziness between Russia and China and breaking fresh ground with Russia with Imran Khan scheduled to visit Russia and a possible return visit by Putin which Bharat would find hard to swallow if it happens.

Bharat relies heavily on Russia for its military hardware apart from being a possible deterrent against China but the latter cushion seems to have gone out of the window with the new Russia China equation.

While the Russian  Chinese  relationship seems to be complimenting each other Bharat which  is a member of the quad will have to further  shore up its defences to face China’s hegemony and Pakistan’s belligerence given the emerging triangular relationship where Pakistan will be piggybacking on China and Russia.

Their is a distinct possibility that the Warsaw pact will be replaced by a Russia, China pact supported by Belarus Pakistan and a few other countries to take on NATO just like the cold war era. Thus most countries would be aligned to either the US or Russia and a few like Bharat will have to walk the tightrope like it did earlier because of it’s dependence on both the US and Russia.

Being a member of the quad which has Australia, US and Japan apart from Bharat the latter will find it hard to bend towards the Russian Chinese arrangement even though the Quad is not a military alliance. Even otherwise Bharat and China have been at loggerheads on the border with sporadic skirmishes and their would be no question of siding with an alliance which has China on board.

Whether the Russian Chinese embrace will get tighter and take the shape of an alliance like NATO depends on Ukraine’s decision to get under the umbrella of NATO. If that happens Vladimir Putin would have exhausted all his options and will not hesitate to invade Ukraine like Crimea come what may for the Kremlin  increasingly  views Ukraine as a western aircraft carrier parked just across from Rostov Oblast in southern Russia.