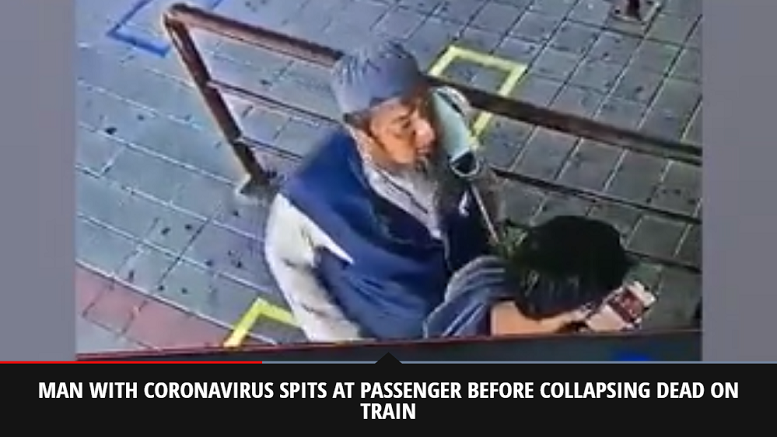 A train passenger with the coronavirus was caught on camera spitting at another person as they queued to buy tickets.

Anan Sahoh was then found dead slumped in a carriage on Tuesday afternoon while taking a train from Bangkok to Narathiwat in the south of Thailand the day before. The 56-year-old man later tested positive for Covid-19.

Anyone who was on-board the carriage has been ordered to quarantine for 14 days and the train has been disinfected. But after checking CCTV from the station, officials were shocked to see Anan spat at the man in front of him as he bought his ticket.

Footage shows the Thai man in Islamic clothing hobbled on a crutch – ignored social distancing lines on the ground – spitting in the man’s face.

He then walked away and took the train on which he was found dead.

Thai authorities are now desperately trying to trace the victim amid fears he could be infected with the killer disease, after the incident at the Bang Sue station in Bangkok.

The director of the State Railway of Thailand, Thakoon Intrachom, said: “We are now worried about a man that was spat at in the security camera footage. Initially, we coordinated with the railway police but they have not found him yet. We want to announce that if anyone knows him or if he has heard about the news, then he should please go to the hospital immediately.”

Medics said that Anan, who lived in Thailand’s Muslim majority deep south, had recently returned from Pakistan and passed through the country’s Suvarnabhumi Airport. He had a ‘fit to fly’ health certificate and was not detected by thermal scans or temperature checks at the airport.

Anan then boarded the train and temperature checks at the station reportedly showed a normal temperature of 36°C.

However, the man developed a cough and vomited during the journey – during which train staff took a picture of him and his ID card – but his condition had improved by the time the train reached Hua Hin railway station.

Officials checked his temperature again and it still measured 36°C. They advised the passenger to take a rest at Hua Hin station, but he insisted on continuing his journey.

At about 10.15 pm, train staff found the passenger collapsed in front of a toilet when the train reached Prachuap Khiri Khan’s Thap Sakae district. Medics performed tests on his dead body which returned positive for covid-19.

State Railway of Thailand Governor Voravuth Mala said he had sent a list of 15 passengers who were on board the same carriage as the dead passenger to the public health office and quarantined 11 people, including two train station staff from the Bang Sue railway station, a security guard, seven railway workers and a railway police officer.

(This article was published on mirror.co.uk on April 2, 2020 and has been reproduced here in full.)