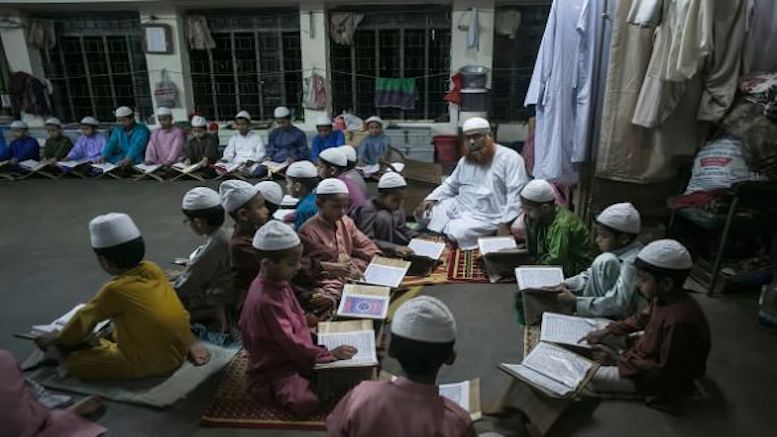 Sri Lankan Prime Minister Mahinda Rajapaksa has directed the country’s Muslim Religious Affairs Department to ensure that all madrassas (Muslim religious schools) are registered with the department and that their syllabus are re-evaluated and updated in consultation with the education ministry, reports Lankan news outlet Daily Mirror . This decision was taken during a meeting of “Buddha Sasana, Religious Affairs and Cultural Affairs Ministry”.

Imagine the kind of outrage and liberal meltdown a similar move would cause in Bharat? There would be chants of ‘emergency’, ‘democracy under threat’, ‘Hindu rashtra’, so on and so forth. Be that as it may, the fact remains that Sri Lanka correctly recognises Islamism as a threat. To put this in perspective we need to see this not as an isolated decision but as one in a series of decisions taken in the aftermath of 2019 Easter suicide bombings which left 258 dead.

One of the first steps after the Easter bombings was the crackdown on Islamic terrorists and extremists, as a part of which mosques were explicitly instructed to submit copies of their sermons to the Muslim Religious Affairs Department.

Sri Lankan government realized that de-radicalization was extremely important to ensure that the island nation remained peaceful. Special laws for the Muslim community were done away with. The then Sri Lankan government, under PM Ranil Wickremesinghe, amended the Muslim marriage and divorce Act raising the minimum age of marriage for Muslims to 18. Sri Lanka also banned all types of face covers including burqas.

A testimony made by an atheist Muslim to a Sri Lankan Parliamentary Select Committee probing the Easter blasts stated that school textbooks for grade 9 & 10 in Tamil and Sinhala languages, published by the Educational Publications Department of the Ministry of Education, taught that those who offend or leave Islam must be given death sentence.

Considering all this, it is not at all surprising that kids grow up to be adults who hate people following religions other than Islam and consider them ‘enemies’ rather than co-existing with them. One wonders what all bigotry is being taught to lakhs of madrassa-going Muslim kids in Bharat in the name of religious education?

Another question that crops up is what role does ‘Buddha Sasana’ (Buddha Rule/Administration) play in a modern nation-state like Sri Lanka?

The sanction to place Buddhism (specifically Theravada Buddhism) a notch above other religions, comes from the Sri Lankan constitution itself. Chapter II (Buddhism) of the constitution states that “The Republic of Sri Lanka shall give to Buddhism the foremost place and accordingly it shall be the duty of the State to protect and foster the Buddha Sasana, while assuring to all religions the rights granted by Articles 10 and 14(1)(e).”

The official website of this ministry makes it clear in no uncertain terms that among various objectives of the ministry is to implement programmes intended at promoting Buddhism and propagating Theravada Buddhism etc. Besides they also ensure that both Buddhist monks and the ‘mutts’ are taken care of through various government projects and schemes.

What a refreshing change from Bharat. Our fellow South Asian nation is proud of its roots and openly declares that preserving its fundamental character is the duty of the State, while guaranteeing freedom of worship to other religions. And Sri Lanka is not unique in adopting such a stance – 78 countries in the world have a state or preferred religion (41 Christianity, 30 Islam, 6 Buddhism, 1 Judaism), including ‘advanced’ Western nations like UK, Russia, Italy, Denmark, Iceland, Spain, Norway, Greece, Finland.

Liberals in Bharat would do well to learn that to solve a problem one must first recognize it as a problem. Radicalization in madrassas is a real problem that has been brushed under the carpet for far too long in our country. Islamic terrorism is a problem plaguing every nation of the world today and the main reason for this is the liberal idea of dealing with Islamists with a kid gloves.

Any attempt to reform the ills that plague the religion & Muslim society are dubbed as ‘Islamophobia’. Sri Lanka has shown courage in introducing checks that would protect Muslims from getting radicalized. Additionally, another important lesson is that a democratic country need not pander to minorities under the garb of ‘secularism’. Taking care of majority interests doesn’t in anyway undermine the rights of any other community. Bharat is probably the only country in the world where majorities have to literally beg for equal rights, even with a so-called ‘fascist pro-Hindu’ Government in power.

(Featured Image is representative only; Source)