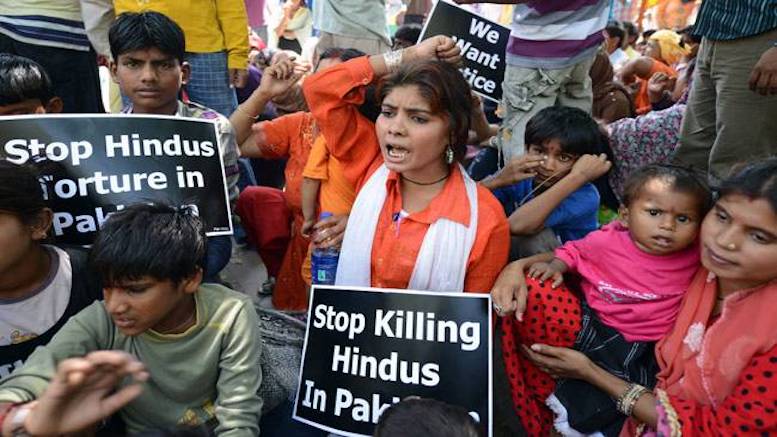 Abduction of minor Hindu girls followed by rape, forced conversion and marriage to men twice/thrice their age is a daily occurrence in the Islamofascist Republic of Pakistan.

It is estimated by Human Rights Commission of Pakistan that over 1000 girls from minority religions face this systemic abuse every year in Sindh province, where the majority of Pakistani Hindus reside. But this could be a huge under-estimate, as one NGO has recorded 15,714 cases of kidnapping of non-Muslim girls in Pakistan in 2020.

One of the epicenters of this modern-day sex slavery and gross human rights abuse is Ghotki, a district in Sindh, which houses the notorious Bharchundi Shareef Dargah run by Sufi Pir Mian Mithoo and his family.

Mithoo is an embodiment of pure evil, a rakshasa who has developed a whole ecosystem to abduct girls, house them in his dargah to ‘break them’, then convert them in public and marry them off. From police, to lawyers, to judges, to politicians, this ex-legislator (he has won in the past on a PPP ticket and was close to joining Imran Khan’s alliance too) who has close contacts to the Pak Army as well, is a terror for Pakistani Hindus.

Recently, another minor Hindu girl Rabia Bheel (14) was abducted from Ghotki. Hindus often keep Muslim-sounding names for their children in Pakistan in the hope that this will protect them to some degree from institutionalized discrimination. As per TV reports, Rabia was abducted from village Lakhu Bheel in Ghotki at gunpoint from her house by Zakir Hussain Traggar & gang. Police refused the family’s pleas to take action.

On the unfortunate news circulating here regarding faith conversion of a minor Hindu girl from Ghotki: Rabia Bheel, a 14 year old girl child from Hindu community, was missing since a few days. Got the FIR registered immediately on March 8 to ensure her recovery

The girl appeared before court today & her statement under PPC 164 was recorded where she stated about her conversion & marriage. Marriage solemnised despite the girl being underage but the relevant law wasn’t regarded by court at this stage.

Court ordered ossification today but sent the girl with husband instead of shelter home. The most disturbing fact about this case in particular is that it is a well-known lawyer from Hindu community who is defending the girl’s conversion & underage marriage in court.

The lawyer holds significant influence in bar & is using it to his advantage. Both as the PPP & the community, our all out support is with the girl’s family that is in anguish & the fight is for the rights of a child that disallow underage marriage.

We are trying to arrange a lawyer [with some conscience] to represent the family on next hearing at 22 March. Highly, highly unsettling that the injustice is also being done at the hands of some of our own from the community!

In summary, this is how the system works in Pakistan

And finally, there is no dearth of HINOs (Hindus in Name Only) across the world, ever-ready to betray Hindus for their own selfish goals. We just need to cast a glance at the senior Lutyens’ lawyers in our own country to understand this breed.

And what is worse, this rabidly supremacist Islamic nation has the gall to talk about ‘Islamophobia’, and the United Nations, acting as a puppet of such Abrahamic supremacists, assents to a ‘Combat Islamophobia’ Day!