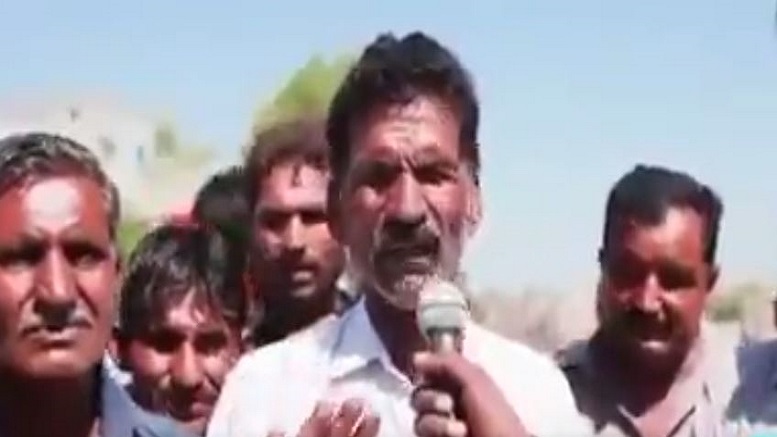 Farm workers from a Hindu family in Pakistan’s Rahim Yar Khan city were tortured and held hostage for taking water from a public tap situated just outside a mosque, according to a report in Pakistani daily Dawn.

Some village landlords accused the poor Hindus of “violating the sanctity” of the mosque, and held them hostage in an outhouse where they were physically tortured.

The incident took place a few days ago in Rahim Yar Khan, Punjab province near the international border, when Alam Ram Bheel, a resident of Basti Kahoor Khan in the city suburbs, was picking raw cotton along with his other family members, including his wife and children, in a field.

When the family went outside a nearby mosque to fetch drinking water from a tap, some local landlords and their men beat them.When the family was returning home after unloading the picked cotton, the landlords held them hostage at their ‘dera’ (outhouse) and tortured them again.

Later, some locals managed to get the Bheel family released. Ram Bheel said the Airport police station did not register the case as the attackers were related to a local parliamentarian of the ruling PTI (Pakistan Tehreek-e-Insaf, party formed and led by PM Imran Khan).

Ram said he held a sit-in outside the police station, along with another clan member Peter Jhon Bheel to protest the high-handedness. Also a member of the district peace committee, Peter Jhon Bheel told Dawn that they finally lodged the FIR after intervention of an MNA.

Jhon said he requested other members of the district peace committee to call an emergency meeting over the issue but they did not take him seriously. PTI’s south Punjab minority wing secretary general Yodhister Chohan told Dawn that the incident was in his knowledge but due to the influence of a ruling party MP he preferred to stay away.

District Police Officer Asad Sarfraz said that he was ‘looking into the matter’. Deputy Commissioner Dr. Khuram Shehzad said he would meet Hindu minority elders before taking any action.

Shehzad said after the Bhong temple vandalism, the district administration had received some complaints from the minority community which ‘proved fake’ when investigated. Answering a question about the inactive peace committee, the DC claimed it was “fully functional”.

The DC’s nonchalant attitude shows what Hindus and other minorities face in an Islamo-fascist state like Pakistan. To dismiss complaints by a severely persecuted and discriminated minority community, whose daughters are routinely abducted for sex slavery and whose sons routinely turn up dead, as ‘fake’ shows the supremacism and heartlessness which lies at the heart of contemporary Pakistan. Poor Hindus know that if they push too hard for justice, police and establishment may just decide to frame you and destroy what remains of your life.

This incident also reflects how deeply feudal mindsets – exploitation of a vassal by his superior – are embedded in Pakistani society. As this article rightly points out, such attitudes are rooted in the land revenue administration system implemented by Mughals which gave birth to zamindari. The system of granting tracts of land in lieu of military service, control of restive masses and exploitative taxation was carried forward by the British colonial rulers.

But if you talk to any Islamist or left-liberal, they will tell you that the problem of feudalism in the Bharatiya sub-continent is due to ‘Hindu casteism’!

‘Liberal’ media’s anti-Hindu bias – both in Pakistan and Bharat

Interestingly, even a so-called progressive and liberal Pakistani newspaper like Dawn subtly cast a question mark on whether the Hindu family was truly tortured or not, as the use of scare quotes in their headline reveals.

And this is not a one-off for Dawn. Look at how another headline casts doubt whether the conversion of two minor Hindu sisters – Reena and Raveena – was forced or not

Some seculars and Islamist apologists were quick to create a false equivalence between this incident and the news of a Muslim boy being beaten in a temple in Dasna, Ghaziabad. Lutyens’ media went to town with that news claiming the boy was beaten when he came to ‘drink water inside the temple’.

But the mainstream media suppressed key facts around what that particular temple, situated in a 90% Muslim area, has been facing for many years: robberies, desecrations including people urinating on murtis), sexual harassment of women devotees walking to the temple, and threat calls to the Mahants (head priests). There was a public tap right opposite the temple, but the boy was found loitering somewhere else inside the temple grounds. Temple workers have complained that it is common for Muslim boys to recce the temple in the day and then robberies happen at night.

See the contrast between Dawn’s sceptical headline of an obvious story of Hindu persecution, with Indian Express’ certitude while reporting the Dasna temple incident:

This is the asymmetrical information war that Hindus are battling. While even ‘liberal Muslims’ are not ready to concede that Hindus are horribly persecuted in countries like Pakistan, attacks on Hindus within Bharat are also swept under the carpet by ‘liberal Hindus’ and they are further demonized if they act in self-defense.