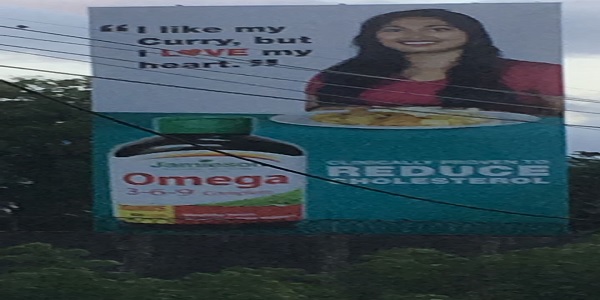 The Omega 3-6-9 Complex advertisement on the nation’s highways of Trinidad and Tobago and now on TV, is an out-of-place, outright attack on all curry lovers. Indeed, it is an ethnic form of aggression on a group of people in multi-culinary Trinidad and Tobago. 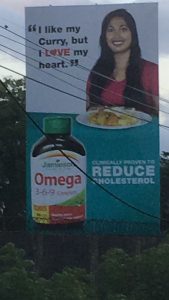 This billboard advertisement suddenly appeared at various points on the highways with the tagline: “I like my Curry, but I love my heart.” The product being advertised is the Jamieson’s brand of Omega 3-6-9 Complex. The caption is followed by additional texts claiming that the tablets have been “Clinically proven to REDUCE Cholesterol.”

The caption is accompanied by an Bharatiya woman with two tresses of long, flowing, black hair. She is serving a plate of parantha “buss-up-shut” roti with pumpkin, curried channa and aloo, curried chataigne (breadnut) and curried mango.

The public should be warned that the claim about the unhealthy effects of curry in this advertisement is false, unscientific and misleading. The advertisement should be immediately removed with an apology made to all curry lovers and educated people.

Curry powder is made from a blend of natural spices such as coriander, turmeric, ginger, cumin, fenugreek, nutmeg, fennel, cloves, tamarind, cinnamon, cardamom, chili peppers and curry leaves. On the other hand, Omega 3-6-9 is made from chemicals manufactured from fatty acids and fish oil and coated with gelatin sourced from beef.

Gelatin is generally a faintly yellow, nearly transparent, glutinous substance obtained by boiling the skin, bones and ligaments of animals to form a glue. Vegetarians and Hindus, therefore, should not be consuming Omega 3-6-9.

The clinically-proven medicinal benefits of curry

Contrary to the claims of the Omega advertisement, consuming curried foods have been clinically proven to lower the levels of “bad” cholesterol (LDL), thereby reducing the risk of coronary heart disease (CHD) and strokes.

A review of the potential medicinal benefits of murrayakoenigii (curry leaves) in dyslipidemia was done by Mamta Parnami and Dr Kanika Varma of the University of Rajasthan in Bharat. Their review was published in the International Journal of Advanced Scientific Research and Management (2018).

The researchers from the University of Rajasthan reviewed studies on the medicinal benefits of curry leaves on human experimental models. In one study, 38 persons were given a preparation of fine ground curry leaves twice daily, at  a  dose  of  3  grams  per  meal  for  a  period  of  5 weeks. The study revealed a significant decline in total cholesterol (P=0.03).

Parnami and Varma also reviewed another study in which 40 post-menopausal women 45-65  years  of  age,  with hyperlipidemia, were given with  dried curry leaf powder (5 gms) added to their main side dish during  lunch  for  45  consecutive  days. At the end of the experimental period, there was a decrease of about 31.4 mg/dl TC, 15.9mg/dl TG, 23.8 mg/dl of the “bad” low-density lipoprotein (LDL) cholesterol. It was also observed that there was an increase of 6.5 mg/dl in the “good” high-density lipoprotein (HDL) cholesterol concentration in the blood.

The clinical claims of Omega 3-6-9 are misleading

These discoveries were published in Journal of the American Medical Association (JAMA) (2012), Archives of Internal Medicine (2012), Pharmacology & Therapeutics (2013), and Cochrane Database of Systematic Reviews (2018).

Omega-6 fatty acids are a family of polyunsaturated fatty acids found in foods such as poultry, eggs, nuts, whole-grain breads and most vegetable oils

A meta-analysis of 10 trials was done on 77,917 patients and published in JAMA Cardiology (2017). The study found no clinical support for the claim that the daily intake of one gram of omega-3 fatty acid in individuals with a history of coronary heart disease prevents fatal coronary heart disease, nonfatal myocardial infarction or any other vascular disorder.

Omega-9 fatty acids are a family of unsaturated fatty acids found in animal fat, vegetable oils and natural foods such as nuts, seeds and avocados.