Next 2 decades to be volatile with no single superpower: US intel forecast 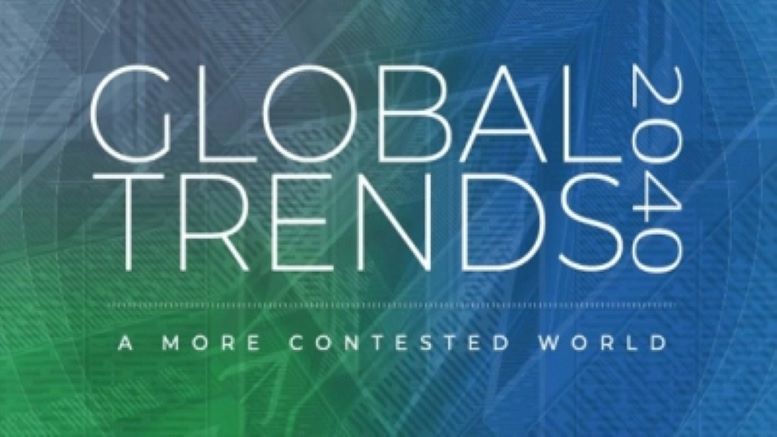 In the international system, no single state is likely to be positioned to dominate across all regions or domains, and a broader range of actors will compete to advance their ideologies, goals and interests.

The forecast has been published in the seventh edition of the US National Intelligence Council’s Global Trends report.

The document, published every four years since 1997, assesses the key trends and uncertainties that will shape the strategic environment for the US during the next two decades.

In the next 20 years, the intensity of competition for global influence is likely to reach its highest level since the Cold War, the US Intelligence Council has forewarned.

“Countries and other actors are likely to compete over food, mineral, water, and energy sources made more accessible, more valuable, or scarcer,” the report said.

Expanding technological, network, and information power will complement more traditional military, economic, and soft power aspects in the international system. These power elements, which will be more accessible to a broader range of actors, are likely to be concentrated among leaders that develop these technologies.

The US Intelligence Council claimed that these power dynamics are likely to produce a more volatile and confrontational geopolitical environment, reshape multilateralism, and widen the gap between transnational challenges and cooperative arrangements to address them. Rival powers will jockey to shape global norms, rules, and institutions.

The US, along with its longstanding allies, and China will have the greatest influence on global dynamics, supporting competing visions of the international system and governance that reflect their core interests and ideologies, the report said. Their rivalry will affect most domains, straining and in some cases reshaping existing alliances and international organisations that have underpinned the international order for decades.

Accelerating power shifts, as well as hardening ideological differences and divisions over governance models, are likely to further ratchet up competition. The rivalry is unlikely to resemble the US-Soviet rivalry of the Cold War, however, because of the greater variety of actors in the international system that can shape outcomes, interdependence in various domains, and fewer exclusive ideological dividing lines.

The lack of a preponderant power or global consensus on some key areas will offer opportunities for other actors to lead or pursue their own interests, especially within their regions. The European Union (EU), Bharat, Japan, Russia, and the UK most likely will also be consequential in shaping geopolitical and economic outcomes.

Regional actors, including spoilers such as Iran and North Korea, will jockey to advance their goals and interests, bringing more volatility and uncertainty to the system. At the same time, states may struggle to establish stable deterrence with these new systems, particularly if the rules and treaties governing them continue to erode or lag.

China will work to solidify its own physical infrastructure networks, software platforms, and trade rules, sharpening the global lines of techno-economic competition and potentially creating more balkanised systems in some regions. China is likely to use its infrastructure and technology-led development programs to tie countries closer and ensure elites align with its interests.

The US Intel report said China probably will continue to seek to strengthen economic integration with partners in the Middle East and Indian Ocean region, expand its economic penetration in Central Asia and the Arctic, and work to prevent countervailing coalitions from emerging. China is looking to expand exports of sophisticated domestic surveillance technologies to shore up friendly governments and create commercial and data-generating opportunities as well as leverage with client regimes.

China is likely to use its technological advancements to field a formidable military in East Asia and other regions but prefers tailored deployments-mostly in the form of naval bases-rather than large troop deployments. At the same time, Beijing probably will seek to retain some important linkages to US and Western-led networks, especially in areas of greater interdependence such as finance and manufacturing.

This more competitive environment with rapidly emerging technologies is likely to be more volatile with a heightened risk of conflict, at least until states establish new rules, norms, and boundaries for the more disruptive areas of competition. States will face a combination of highly destructive and precise conventional and strategic weapons, cyber activity targeting civilian and military infrastructure, and a confusing disinformation environment, the report said.