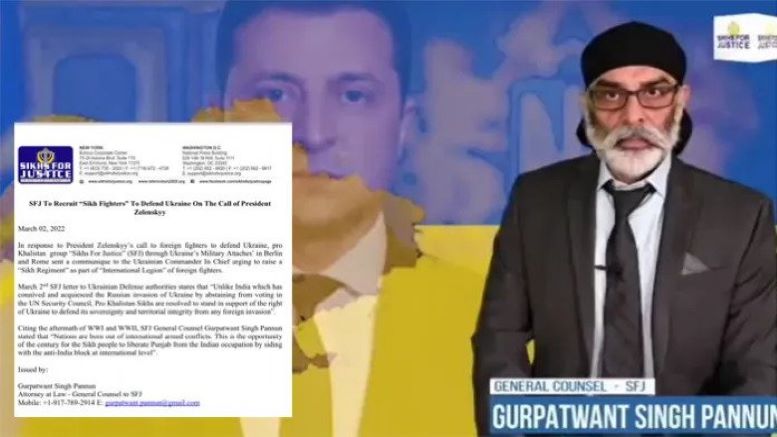 Terrorist outfit SFJ (Sikhs for Justice) has now jumped in the ongoing Russia-Ukraine war by asking Khalistanis to support Ukraine. The Khalistani outfit even called for ‘raising an army of foreign fighters to defend Ukraine’. Gurpatwant Singh Pannu, who is a designated terrorist under UAPA, said in a letter released on March 2 along with a video, that unlike Bharat that is indirectly supporting Russia by abstaining from voting at UNSC, Khalistani Sikhs were ready to “defend Ukraine’s sovereignty and territorial integrity”.

The letter even urged the Ukranian President to innduct a Sikh regiment as part of the Inter-nation legion of foreign fighters. While Pannu wanted to defend Ukraine’s territorial integrity, the terrorist organization has made calls for ‘liberating Punjab’ from Bharat and felt that this was the right time to do so by siding with the ‘anti-India block at international level’.

In the video message, Pannu promised help to the Ukranian President in return for recognition for secession of Punjab from Bharat. “While we raise a Sikh regiment and promote it in Punjab, we urge President of Ukraine to first recognize Sikhs into self-determination and move a resolution in general assembly recognizing sactionist referendum for the independence of Punjab from India”, he said.

He even provoked the West and NATO by rebuking them for ‘supporting’ Bharat since the last three decades while adding that Russia’s war on Ukraine presented the perfect opportunity to support Sikhs (read Khalistanis) in their ‘fight for independence of Punjab’. He highlighted that just like Sikhs had fought for the West in both the world wars they would do so this time as well provided the West supported their demand for Khalistan.

Such calls is likely to entice youth looking for ‘heroism’ like one Sainikhesh Ravichandran from Tamil Nadu’s Coimbatore. The 21 year old was rejected twice by the Bharatiya army and his attempt to join the US Army also met with failure. He was reportedly studying Aerospace engineering at Kharkiv National University in Ukraine and found the opportunity to fulfill his ‘dream’ in the ongoing conflict between the two nations. He is fighting for the Georgian National Legion paramilitary unit comprising of volunteers.

Not just Sainikhesh, there are other young people who probably find war both ‘thrilling and adventurous’. It has come to light that an Indian Punjabi from New Zealand identified as Ravi Singh has been fighting in East Ukraine for Russia-backed rebels for many years now (from 2015 to be precise) and says he is willing to fight for Khalistan cause too if it revives. He is said to be a communist who joined the forces despite having no combat experience purely taken in by ideology and social media.

What’s even more worrying is that by his own admission he identifies himself as a ‘true Communist & anti-capitalist’ who grew up on stories of the Khalistan movement in Punjab & was a staunch follower of Indian communist struggle. He says he was excited to witness the conflict provoked by ‘some fascist crack-heads who hated Russia and its policies’.

It must be pointed out here that the Ukranian Embassy has been caught on the wrong foot and has been found to violating the Vienna convention by appealing to foreigners to join the the International Territorial Defense Legion of Ukraine. The appeal published on its Facebook account on March 3 by the Ukranian Embassy in Algiers and also relayed by its Embassy in Senegal had to be taken down after both Algerian and Senegalese authorities asked the former to immediately withdraw the call that violated the laws of the land as well.

This is a dangerous trend of Bharatiyas going to fight as freelancers/mercenaries in a foreign war where Bharatiyas have no business to be. Also, it must be pointed out there is every risk of Ukraine becoming a haven for terrorists like Syria had become.It is time for Bharat’s government to put its foot down and make it amply clear that they will lose Indian citizenship, be declared persona non-grata, and will be tried for unlawful acts if and when they return to Bharat.