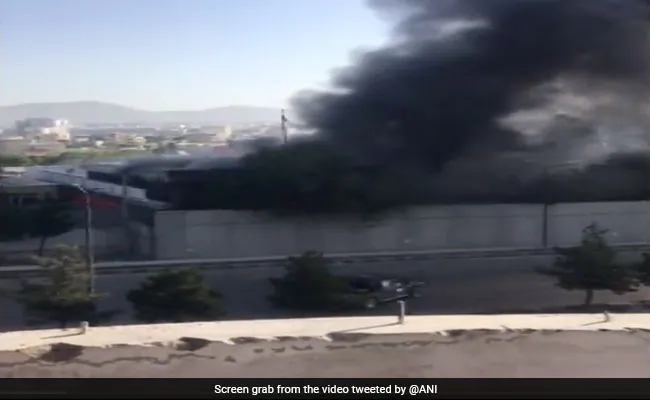 Three explosions ripped through Gurdwara Dashmesh Pita Sahib Ji in Kabul early today morning killing at least 2 – Sikh devotee Sawinder Singh (60) and a Muslim security guard – and injuring 7 others. However, the fate of several people believed to be trapped inside the gurudwara is still not clear.

Taliban, a terrorist group which seized power in Afghanistan after USA’s hasty withdrawal last year, confirmed that the attack occurred around 6-6.30 a.m. at the gurudwara located in the capital’s Kart-e-Parwan area. The same gurdwara was attacked last October too. In March 2020, two dozen worshippers were killed when the gurdwara was again attacked by Islamic State terrorists. The Kart-e-Parwan area of Kabul is densely populated and is the centre for Afghan Hindu and Sikh communities.

As per reports, the Gurudwara’s main prayer hall where the Guru Granth Sahib was kept had been set on fire after indiscriminate firing targeting the devotees. The Gurudwara in Kabul has been home to at least 150 Sikhs who have been staying there since the fall of the Ashraf Ghani government last August. Around 30 devotees were present in the prayer hall at the time of the attack and several managed to flee as the attack began.

“The security forces were able to immediately mobilize to control the attack and eliminate the attacker in a short time to prevent further casualties,” Ariana News quoted Kabul Police spokesman Khalid Zadran as saying.

In a statement, the Interior Ministry said that “before entering, the enemy attacked the guards with a grenade, which caused a fire, and two of our Hindu (sic) compatriots, who were injured in the attack, were evacuated and taken to hospital for treatment”.

According to the Ministry, a car bomb was also detonated by the insurgents before it reached its target. Videos on social media showed smoke billowing from the two-storey gurdwara which is surrounded by blast walls. Citing witnesses, a Xinhua news agency report said that the first blast occurred at around 6 a.m., and the second explosion followed half an hour later.

Earlier in the day, Bharat’s Ministry of External Affairs said that it was closely monitoring the situation. “We are deeply concerned at the reports emanating from Kabul about an attack on a sacred gurdwara in that city,” a statement citing Ministry spokesman Arindam Bagchi said.

It was reported after last year’s take over by Taliban that Sikhs and Hindus have received an ultimatum from Taliban that they should either convert to Sunni Islam or leave the country.

There was no immediate claim of responsibility for the attack, however, the Islamic State’s Khorasan unit (IS-K) has in the past claimed responsibility for such attacks across the country. On Friday, one person was killed and seven others were wounded after a blast hit a mosque in the northern province of Kunduz.

Last month, a series of explosions claimed 14 lives. In April, serial blasts at a Shia mosque in Mazar-e-Sharif and other spots killed dozens. Islamic State claimed responsibility for attacking the Shia targets, as the Sunni terrorist group considers Shia as kafirs (indifels).

The tragic irony is that while handful of remaining Sikhs and Hindus (Dharmics constituted around 7 lakh of Afghan population in the 1970s, but are today under 1000) are being exterminated in Afghanistan, Sikh radicals – most with Khalistani leanings – in Bharat are found siding with Islamists on issues like CAA and ‘blasphemy against Islam’. Of course, the US/Canada/UK/Australia based Khalistani activists like Gurpatwant Singh Pannun won’t utter a single word against this ghastly terrorist act, as hate for Hindus and Bharat blinds them to the real threat facing Sikhs and all fellow Dharmics.