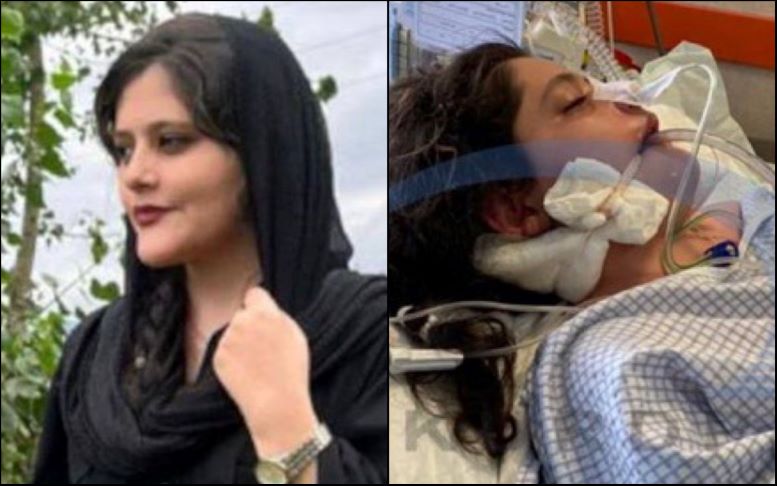 22-year-old Mahsa Amini, who was beaten into a coma for wearing the hijab inappropriately by ‘morality police’ in Iran’s Tehran, reportedly died on Friday (September 16). She was admitted to a hospital on Tuesday after being beaten inside the police van and a detention centre. Officials said she slipped into a coma and was declared brain dead.

Amini is a native Sahgez who had travelled to Tehran on a pleasure trip. She was at the Shahid Haghani Expressway entrance with her brother Kiarash when she was taken away for an hour-long ‘re-education’ class. She was taken to the Vozara Avenue police station where other women who had violated the compulsory hijab rule of the nation were present. The women were beaten to school them regarding the country’s dress rules.

Kiarash said his sister was abducted by the police after their van blocked her path. He was assaulted and his arm was twisted by the police when he attempted to prevent his sister from being taken away. They informed him that Amini would be let off after an hour. Kiarash followed the police van to Vozara Avenue where he saw 60 to 70 persons carrying clothes for the detained women. He said he saw a few women being released from the detention centre while other women from inside were screaming for their lives.

“All of us were banging on the doors. All of a sudden the agents rushed out of the building and attacked us with batons and teargas. My whole body is black and blue and my eyes have been burning since last night. Five minutes later an ambulance left the building. Every one of them said somebody inside had been killed”, he has been quoted as saying.

Although police lied to him that one of the soldiers had been injured, one of the released women confirmed that it was Kiarash’s sister who had sustained injuries. At Kasra hospital, where the victim was admitted, he learned his sister was seriously injured. The doctors stated that she had suffered a stroke and heart attack. Kairash alleged that his sister’s condition worsened due to the beating at the centre and subsequent delay in giving medical care.

The victim’s family has been put under surveillance since Tuesday night. Kiarash’s attempt to seek legal help didn’t yield any positive results as he was directed by the court to approach the Vozara Avenue headquarters. “They gave me a letter and told me to go to the headquarters in Vozara Avenue to register my complaint there. It’s like asking my father to name the murderer if I killed someone in our house. But I won’t allow this to end in silence. I will tell everyone in Iran what happened”, Kiarash said.

In an attempt to cover up the matter, Tehran police issued a statement on Thursday claiming Mahsa Amini already suffered from a heart problem and denied having beaten her. Human rights activist Puran Nazimi has challenged the police statement and asked them to release security camera footage to back their claim.

Hijab became compulsory in public spaces in Iran after the 1979 revolution. Iranian women have taken up the Free the Hijab campaign to break the prohibition. In recent times, the hijab police have stepped up patrolling and intimidating women in the name of moral policing in the country’s major cities.

Mahsa Amini’s death has triggered protests in Iran with women taking off their hijab to register their opposition to moral policing. “Women of Iran-Saghez removed their headscarves in protest against the murder of Mahsa Amini 22 Yr old woman by hijab police and chanting: death to the dictator! Removing the hijab is a punishable crime in Iran. We call on women and men around the world to show solidarity”, said Iranian journalist-activist Masih Alinejad.

The protests took place in Amini’s hometown Saghez and the regional capital Sanandaj. Women continued to protest in Western Iran by taking off their hijabs and cutting off their hair. Tehran University students also protested the killing of Mahsa Amini. There were also reports of Iranian police firing at the protestors injuring some of them.

“Iranian women show their anger by cutting their hair and burning their hijab to protest against the killing of Mahsa Amini by hijab police. From the age of 7, if we don’t cover our hair, we won’t be able to go to school or get a job. We are fed up with this gender apartheid regime”, tweeted Alinejad.

“Women and men together took to the street to protest peacefully against the brutal death of Mahsa Amini but how ironic the regime’s security forces opened fire at them to convince them that they didn’t kill Mahsa. People are fed up with hijab police and religious dictatorship”, tweeted Masih highlighting the protests that continued today.

Leftist extremist Kavita Krishnan took this as an opportunity to target Bharatiya Hindus. She drew false equivalences between ‘sanghis’ and Iranian Islamists who beat Mahsa Amini to death for not wearing the hijab properly. After she faced flak from Islamists for appreciating Iranian women protesting against the imposition of the hijab, she invoked ‘Hindu supremacy’.

“You have no business binding women to any law in the name of religion. Just as Hindu supremacists have no business telling Muslims they can’t pray in public spaces etc. You and they are the same ilks”, she replied to Shadab Chauhan, Peace Party’s chief spokesperson. Chauhan had slammed Krishnan for questioning Sharia’s authority.

“The left-wing activist, who had been championing women’s rights with Islamists, got a reality check when Shadab told her that all Muslim women are bound by Sharia law and how Hijab is more important than gold and diamond”, noted OpIndia. Chauhan also invoked the constitutional right to practice and propagate religion and warned the leftist to stay away from Islamic matters. He also asked her not to interfere in Sharia.

Krishnan then brought up the hijab row in Indian schools. “Outraged at Iran’s morality police imposing hijab? Are you also outraged at Sanghi thugs that terrorise hijab-wearing women?”, she asked. While Amini was killed for her choice, the girls in the Udupi school faced no brutality. It must be pointed out that the girls had violated the uniform code in place in schools.

“No State government stopped Muslim women from wearing or removing their hijab in public, unlike the case in Iran. Given that left-wing activists rely on Islamists to amplify their messages, they need to use the ‘Hindu supremacy trope’ from time to time to keep the extremists on their side”, highlighted OpIndia.

Even the Karnataka High Court (HC) had held that Hijab is not an essential practice in Islam and that uniform in schools and colleges is a reasonable restriction on the Right to Religion. This does not bar Muslim women from exercising their choice on the streets or in public places. The arguments in the HC highlighted precedence showing hijab is not compulsory.

The Islamist-leftist-liberal cabal has been pushing for the hijab projecting it as an essential practice of Islam while women in Islamic Iran are getting rid of it.