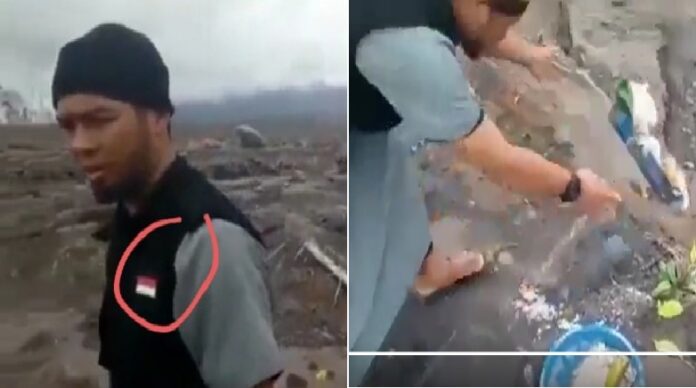 Hindu religious offerings were kicked and thrown away by Islamists in Lumajang, East Java province, Indonesia. A video that effect was shared by several handles recently.

In the video, a man can be seen throwing and kicking away religious offerings made by Hindus in what appears to be a sacred site, while crying out “Allah-u-Akbar”, the Muslim religious slogan which means “Allah is Great”.

East Java is the eastern end of Java, the main Indonesian island where 147 million people, about 55% of the country’s population lives. Lumajang is a Regency located in the East Java province, close to the island of Bali which is predominantly Hindu.

It is not known if the man responsible for the desecration has been arrested or not.

Hindu Dharma is the fourth largest official religion in Indonesia with more than 4 million adherents, according to the census. But those who practise the faith of the Majapahit dynasty claim double that number, as per this thejakartapost.com article from 2015.

Mandara Giri Semeru Agung complex is the centre for Hindus in East Java. There are at least 7,500 Hindus just in and around Lumajang (the closest city), and many worshippers also come from Bali.

Hinduism probably arrived in Java about 1,900 years ago. Until the 16th century it dominated the island though it was often mixed with Buddhism and local traditional beliefs. Islam appeared in the 13th century and spread rapidly, often through the change of faith of feudal rulers like Madura’s Sultan Pragalbo. He switched to Islam on his deathbed in 1531, and so his subjects were forced to jettison their original beliefs. Islam is now Indonesia’s major faith though legally the Republic is secular. There are more Muslims here than any other nation, and more than all the Middle Eastern countries combined.

…In the 1950s, according to cultural anthropologist Martin Ramstedt, the Indonesian government declared the Hindu Balinese as ‘people still without religion’ and ‘targets for Muslim and Christian proselytizing’. Yet a decade earlier Hinduism had been recognized in the foundation of Indonesia. The national emblem features the Garuda ‘a mythical bird-beast that carried Lord Vishnu, one of the religion’s three supreme deities.

Indonesian law requires citizens to be monotheistic, while traditional Hindus worship many gods. The impasse ended when a translation of Hindu scriptures settled on the term ‘undivided one’ as an essential part of the belief. Despite this, it was not until 1962 that Hinduism officially joined Islam, Protestantism, Catholicism and Buddhism as an approved religion. Confucianism was de-listed in 1978 and reinstated in 2000.”

One can also refer to this Hinduism Today article reproduced on eSamskriti.com to understand more about the Hindu history of Indonesia and how epics like Ramayana are still enacted and followed across the country, by both Hindus and Muslims.

In October, Indonesia’s founding president Sukarno’s daughter Sukmawati Sukarnoputri had converted to Hindu Dharma, her grandmother’s religion, from Islam in a grand ceremony in Bali.