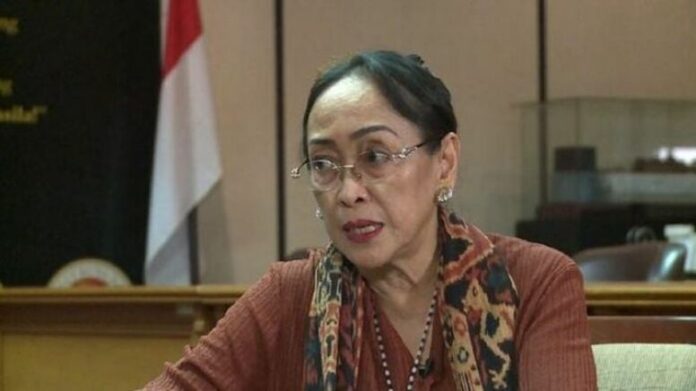 The daughter of Indonesia’s first president and the founder of the Indonesian National Party (Patai Nasional Indonesia-PNI) Sukmawati Sukarnoputri has decided to embrace Hindu Dharma through a formal ceremony that is scheduled to be held on October 26.

Sukarnoputri, the daughter of Indonesia’s founding president Sukarno and third wife Fatmawati, is also sister to Megawati Sukarnoputri, the 5th President of Indonesia. She was once married to Kanjeng Gusti Pangeran Adipati Arya Mangkunegara IX, but the couple divorced in 1984.

Sukarnoputri’s present faith is Islam that she will leave by converting to Hindu Dharma. The Sudhi Wadani, a ritualistic Hindu ceremony recognising Sukmawati’s conversion to Hindu Dharma will be held at the Bali Agung Singaraja, a monument of her late father Sukarno, at the Buleleng Regency situated in Singaraja city of Bali, which is also the ancestral land of the family.

Sukarnoputri’s conversion to Hindu Dharma, interestingly, is taking place on her 70th birthday. Witaryono Rejsoprojo, the lawyer of Sukarnoputri, had earlier informed that his client is adept in Hindu theology. “Yes, (her grandmother’s religion is the reason). The mother of ‘Bung Karno’ was Ida Nyoman, a Balinese noble person (bangsawan),” she said.

Reportedly, Arya Wedakarna, who is the head of the Sukarno Center in Bali, has been entrusted by Sukmawati for the successful conclusion of the event in Bali. However, we are yet to determine if she will have decided to settle permanently in Bali. The island of Bali, which is majority Hindu (90%) although Hindus constitute just 2% of Indonesia’s total population, observes and celebrates Hindu all religious festivals; Sukmawati has attended these rituals in Bali whenever she had visited the region.

“Everything has been decorated,” said Jro Made Arsana, a refugee of Bale Agung informing about the preparations which are underway for the grand conversion ceremony. He added that Sukmawati Sukarnoputri will take the oath to embrace Hindu Dharma in the presence of Parisada Hindu Dharma Indonesia (PHDI) management. He also appeared elated describing how the daughter of Indonesia’s first President is preparing to come to Bale Agung joined by her siblings.

Some media houses in Indonesia had published an invitation card inviting masses to attend the Sudhi Wadani function and the same had been circulating on social media. However, the family of Sukarnoputri has confirmed that following the Covid-19 protocol, they have decided to hold a small private ceremony, which will only be attended by close relatives.

“The Sudhi Wadani ceremony is a special internal ceremony for the Dadia Pasek Baleagung Buleleng extended family,” said a family member. He further confirmed that conscious of the ongoing Covid-19 pandemic and thus avoiding huge gatherings during the ceremony, the Baleagung Family has not issued an invitation to the public for attending Sukarnoputri’s conversion to Hindu Dharma.

The Majapahit Hindu empire of Indonesia started declining in the 15th century due to rise of the Malacca Sultanate and presence of Muslim Chinese, Arab and Malay communities in northern ports of Java. In 1478 when King Brawijaya V converted to Islam, Sabdapalon, a priest in the king’s court cursed him and vowed to return after 500 years when the world will be suffering from natural disasters and political corruption.

“I am the servant of the Queen and all of the Dang Hyang (devas and spirits) in the land of Java. Starting from the first ancestor of your majesty, the Wiku Manumanasa, Sakutrem and Bambang Sakri, from generation to generation until today, a servant of the Javanese kings. For 2,000 years until now, nothing had changed in their religion. I was here to serve the descendants of the Javanese kings. This is where we part. I am returning to my origins. However, please our king be reminded, that after 500 years I will restore the Buda (Shiva-Buddhagama) religion to all of Java,” vowed Sabdapalon, as per blogger Kalpavriksha.

“When Mount Merapi erupts and its lava and ashes fall to the South-West with a terrible smell, that is the signal that I will be coming soon,” he added.

Mt. Semeru has been in a state of eruption since 1967. Notably, in 1978, modern Hindu temples were built in the island nation and several Muslims reconverted to Hindu Dharma, too. The Hindus in the region believe that the prophecies of Sabdapalon are turning true and the conversion of Sukarnoputri to Hindu Dharma is just another chapter in the prophecy turning true.