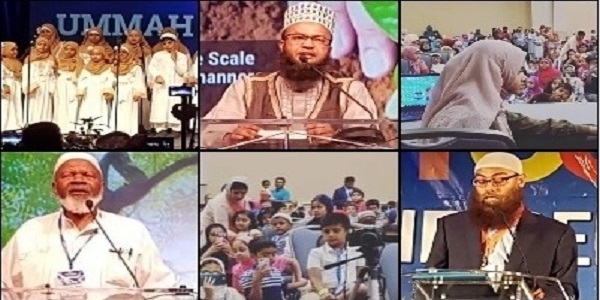 The Muslim Ummah of North America (MUNA) held its 2019 annual convention on July 5-7 in Philadelphia, USA. Just as with last year’s conference — also held in the nation’s birthplace — there was no shortage of extremist speakers sharing the podium. But in contrast to 2018, this time the focus was squarely on the Islamist charge into the political sphere. Speakers claimed that Islam required believers to gain political power, impose an Islamic doctrine on America, and fundamentally reshape American society.

Ayman Hammous, executive director of the Muslim American Society (MAS, the American affiliate of the Muslim Brotherhood), stated that “Islam is needed at the spiritual level, at the social level, at the political level.” Movita Johnson-Harrell, a state representative from Pennsylvania, called on Muslims to “occupy every space of this world.”

Nihad Awad, co-founder of the Hamas-backed group Council on American Islamic Relations (CAIR), told convention participants that it is their “duty as Muslims” to engage in civil and political advocacy. “Our faith is based on action,” Awad proclaimed, arguing that Muslims on the political sidelines are not “true believers.” Georgia state senator Sheikh Rahman urged Muslims to get involved in local politics, insisting that “they have the responsibility” and should do “what is right for this country.”

And Zahid Bukhari, president of the Islamic Circle of North America, a JI (Jamaat-e-Islami) proxy group, recalled a chat he once had with Rached Ghannouchi, the founder of the Muslim Brotherhood-inspired Ennahda movement in Tunisia, on the best way to establish Islam “on the practical level” in the United States.9560433151

According to Bukhari, Ghannouchi said there are two options to Islamize society: if a country has a sitting Muslim majority, the government could “practically establish Islam as a way of life on this planet Earth or at least in their own country.” But if Muslims are in the minority, particularly in the West, Muslim organizations should promulgate Islam across society until their influence has grown large enough.

Ghannouchi’s Ennahda movement is an ominous example of the consequences of electing an Islamist movement to power. After being involved with coup attempts in the 1980s, Ennahda triumphantly obtained a majority in the first Tunisian democratic elections of 2011. It did not take long for party leaders to show their true colors.

Ennahda legalized Hizb ut-Tahrir, a violent pan-Islamist party which seeks to re-establish a worldwide caliphate. It maintained close relations with Ansar Al Sharia Tunisia (AST), an offshoot of Al Qaeda, and allowed the organization to operate freely in Tunisia while permitting other Salafi extremists to take over mosques and incite Tunisians to wage jihad.

While MUNA claims to be a benign nonprofit group devoted to “social service” and developing the “personal, moral and social quality of human life,” it is also closely linked to the Bangladeshi branch of Jamaat-e-Islami (JI), a violent South Asian Islamist movement. In 2014, Jane’s Terrorism and Insurgency Centre named Jamaat’s student wing in Bangladesh, Islami Chhatra Shibir, as the third-most violent non-state armed group in the world.

In South Asia, JI is best known for its involvement in the 1971 Bangladeshi war of independence, during which JI operatives helped Pakistani forces murder tens of thousands of Bangladeshis.

At the 2019 conference, State Representative Movita Johnson Harrell insisted that Muslims “are the example for peace and love.” This pleasant-sounding pronouncement seemed rather incongruous on a stage shared with leading extremist preachers such as Suleiman Hani, who has promoted 9/11 conspiracy theories and complained that individuals who bring up the Holocaust and Jews for “objective discussion” are “labeled as antisemites”; and Suhaib Webb, who has declared that adulterers should be stoned to death and warned Muslim youth that they are being “pounded by the ideology of the Kuffar [a derogatory term for non-Muslims].”

One of these war criminals, Muhammad Kamaruzzaman, JI’s assistant secretary general, was the guest of honor at a 2010 MUNA picnic. Another JI leader, Mir Quasem Ali (hanged by Bangladesh for mass murder in 2016), was the brother of MUNA executive board member Masum Ali. And sessions at MUNA’s 2019 conference were moderated by Nakibur Rahman, son of executed JI criminal Moitur Nizami. Today, Rahman remains a fervent advocate of his father’s work, and mourns him as a great martyr.

Islamist ideologue Abul A’la Mawdudi founded JI with the declared belief that politics are “an integral, inseparable part of the Islamic faith,” a necessary step towards “the Islamic state that Muslim political action seeks to build.” As with Mawdudi, many of the MUNA 2019 convention speakers called for establishing Islam as a complete way of life in the United States.

Last year, a number of elected officials merely endorsed MUNA’s convention. This year, multiple elected officials accepted MUNA’s invitation to speak alongside a collection of hardline preachers and activists from America’s Islamist establishment. Did Reps. Johnson-Harrell and Rahman not know about the extremism of their host and fellow speakers? Or did they not mind? Certainly, Johnson-Harrell’s words were not very different from those of the other speakers calling for political involvement as a means to impose Islam.

Lawful Islamists tend to associate religious devotion with political activism. Civic participation as an act of piety is a popular tenet of Mawdudism, one that points to the ideological bonds between JI and MUNA. But Islamists of all stripes tend to have dreams of theocratic domination; and until the 9/11 terror attacks, they were not shy about saying so in public.

Since then, American Islamists abruptly became much more circumspect about revealing their designs. Yet now, MUNA and its Islamist allies are celebrating the Muslim community’s growing political power, and openly declaring their aspiration once again to use that power to reshape America.

(This article was published on meforum.org on August 2, 2019 and has been reproduced here in full.)