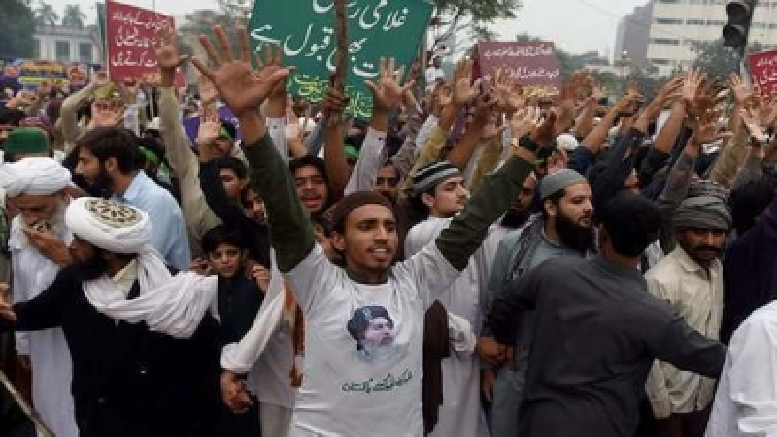 While the dominant Sunni Muslim population in Pakistan has always reacted furiously against alleged blasphemy accusations, their reaction to the desecration of non-Muslim religious places has always been inversely opposite and reflective of a kind of indifference or complicity, according to a new study in Pakistan.

A report by the Centre for Research and Security Studies (CRSS) in Islamabad said the offences against religious places and holy scripts of non-Muslims were reported by Ahmadi, Christian, Hindu, and Sikh communities.

As may be illustrated through these examples, these three communities in particular may be targeted by enraged mobs, egged on by all manner of individuals ranging from cleric, local leaders, and even lawmakers and policemen.

“These are a few examples of how blasphemy offences committed against non-Muslim faiths are treated in the country in comparison to similar offences against the Muslim faith. If we claim that we treat all faiths equally and show similar respect to other faiths as we show to our own, it has to be exhibited in our acts,” the report said.

At least 89 citizens have been murdered in extrajudicial killings related to blasphemy cases since Pakistan’s inception, according to the report from the CRSS, Friday Times reported.

From 1947 to 2021, at least 18 women and 71 men have been killed by mob rule following accusations of blasphemy, without due process or a fair trial. The report collected data from secondary sources, including newspapers and law enforcement reports, to tally the number of victims, perpetrators, charges, and the role of the authorities, the report said.

Between 2011 and 2021, at least 1,287 citizens across the country were accused of committing blasphemy, with the report indicating that the actual number is likely higher as not all blasphemy cases are reported.

The CRSS report said a high-profile example was that of an angry mob of Tehreek-e-Labaik Ya Rasool led by Pakistan Tehrik-e-Insaaf (PTI) leader Hamid Raza which attacked a historic Ahmadi worship place in Sialkot on May 25, 2018.

On October 3, 2014, the foundation stone of a church and holy verses of Bible were removed by a mob in Okara district. According to the police, an FIR was registered for criminal intimidation against 10 people for damaging the church and defaming the cross.

Other than Ahmadi and Christian worship places, the worship places of Hindus and Sikhs were also subjected to desecration and in most of the cases enraged mobs were involved.

The last incident of such blasphemous act occurred on December 30, 2020 when around 1,500 people led by a cleric descended on a historic Hindu temple in Khyber-Pakhtunkhwa’s Karak district and vandalised some portion of the temple and set it on fire.

Initially, some arrests were made but hardly after some time, a jirga was held wherein the Karak residents apologised for the incident and the Hindu community, in return, pardoned the culprits.

This wasn’t the only case where the non-Muslim community showed its tolerance to the Muslim offenders of their faith. A similar case against Christian faith was reported on September 21, 2012 when angry mob set the Sarhadi Lutheran church in Mardan on fire along with countless holy books. The local Christian community later pardoned the perpetrators, the report said.

Adnan Prince, a Christian, was reported on January 13, 2016 to have been languishing in prison for two years under blasphemy charges. His crime was that he had allegedly passed uncharitable remarks regarding a leader of the Jamatud Dawa (JuD).

Salamat Masih, 11, Manzoor Masih, 38, and Rehmat Masih, 44, were accused of writing blasphemous remarks on a wall belonging to a mosque. Although the mother of Salamat Masih said that her son did not know how to read.

Samuel Masih, a Christian, accused of defiling a mosque by spitting on its wall, was killed while he was in police custody. A police officer, who used a hammer to kill him, claimed that it was his duty as a Muslim to kill Masih.