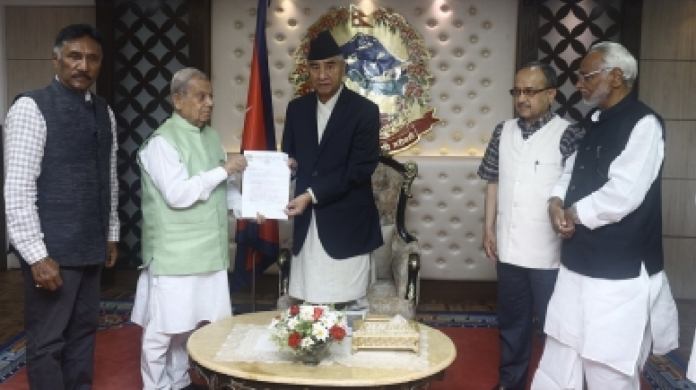 With November 20 elections for the House of Representatives and Provincial Assembly just three weeks away in Nepal, election fever is slowly gripping Madhes Province.

Rallies and campaigns have intensified across Terai ahead of the crucial elections that are being held for the second time after the country promulgated its first federal republican constitution in 2015. The first such elections took place in 2017.

Madhes Province borders India and shares close socio-cultural affinities with the neighbouring country. There are eight districts in the province, with 32 federal parliamentary seats. There are 107 seats in the provincial assembly headquartered in Janakpur.

As elections are inching closer, there are various projects and calculations over election results of Madhes.

The Madhes-centric parties are allying with traditional political parties in the elections, avoiding an electoral alliance with each other.

But, another Madhes-centric party Loktantrik Samajbadi Party (LSP), led by Mahantha Thakur has partnered with the five-party ruling coalition under the Nepali Congress.

Madhes-centric parties’ electoral alliance with the ruling and opposition parties is not based on ideology, but rather on electoral calculations.

The Madhes-centric parties, who once championed the agenda of federalism and inclusiveness, are struggling to ensure seats in the federal and provincial assemblies. In the upcoming polls they are partnering with the conventional political forces, which are mostly centrist and anti-federalist.

Analysts say that Madhes-centric parties are likely to lose elections this time around for their own past mistakes.

“In the last elections, Madhes-centric parties lured voters claiming they would make ground for amending the constitution to meet their demands. But when they got into power, they failed to live up to their promises — they could not lobby for creating a situation for the constitutional amendment. Rather, they got mired in the quagmire of power politics. Because of their failure to vocally advocate for Madhes’ agendas, the Madhesis are disassociating themselves from the regional parties and are yet to associate with the newer parties,” Tula Narayan Shah, a political analyst who also comes from the Madhes region, told Kathmandu Post newspaper in an interview on Monday.

“They will get fewer seats than in the last elections. Loktantrik Samajbadi Party will witness a poorer performance than the Janata Samajbadi Party because they deviated from their core original agendas,” he observed.

Apart from traditional and Madhes-centric parties, some other fringe parties such as CK Raut-led Janamat Party have made their presence felt on the ground in the upcoming elections.

Analyst Shah says that he does not think Raut’s party will bring impactful results in the upcoming polls. “Major Madhes-based parties will shrink, and emerging parties in Madhesh don’t spark much hope,” he added.

The Nepali Congress has been the most influential political force in the Terai-Madhes region even after the emergence of regional parties on account of a massive Madhes uprising in 2008.

Since then, Madhes-centric parties are dominant political force in Madhes. Over the years, these regional parties played a vital role in the formation and dissolution of successive governments in the Center.

When Nepal promulgated its first federal republic constitution in 2015, the Madhes-centric parties collectively launched months-long protest in Terai region, seeking amendments to the national charter. The traditional parties including the Nepali Congress, the CPN (UML) and the Maoist enacted the constitution through a two-thirds majority despite the fierce agitation in Madhes region that saw the killings of over 50 people.

The situation of traditional parties Vs Madhes-centric parties did not last long.

Because, the same Madhes-centric parties who protested the newly-promulgated constitution, joined elections along with major parties in the House of Representatives to pick a new prime minister in October 2015, inviting ire from the agitating population from Terai.

Seven years later, the Madhes-centric parties were seen disoriented as they abandoned their constitutional amendment agenda.

However, the present provincial government in Madhes is headed by Lal Babu Raut, a leader of the Janata Samajbadi Party led by Upendra Yadav. The provincial government is backed by the Nepali Congress, CPN (Maoist) and the CPN (Unified Socialist). At the federal level, the JSP quit the party after it joined the UMl-led electoral alliance in mid-October.

Congress may also win in Madhes

Analysts say the existing ruling alliance is likely to emerge victorious in the upcoming elections in Madhes and chief ruling party the Nepali Congress will be benefited the most this time around.

“Madhes has traditionally been a bastion of the Nepali Congress (NC). In the impending elections, too, every political force including Madhesis will have a fierce battle primarily with the NC as before. Ultimately, the NC will reap benefits from this alliance-based electoral competition,” Sitaram Baral, a senior journalist, who follows regional politics of Madhes closely, told India Narrative.

In view of the upcoming elections, the ruling alliance over the past few months has given an impression to the Madhesi people that it can be their savior. For example, the ruling alliance endorsed the long-delayed Citizenship bill in August from the federal parliament as a matter of urgency. It was widely believed that the prime political motto of the ruling alliance was to secure electoral gains mainly in Madhes region.

Similarly, the main opposition, CPN (UML) which has been described as anti-Madhesi might also secure more seats in parliament from this region, according to analyst Shah.

“The UML is not going to emerge victorious in Madhes. But, it will secure a better position than the past because there is a lack of public trust in Madhes-centric parties,” Shah noted.