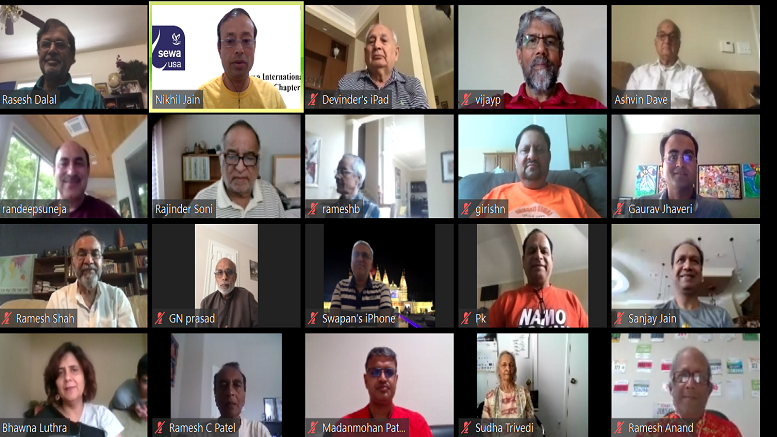 Since the early days of the pandemic, Hindus of Greater Houston (HGH) have been routing their combined resources into multiple food drives, distribution of PPE’s and actively fundraising to help Houstonians impacted by the financial fallout. About $100,000 has been raised by HGH to date for Sewa International and other organizations for their relief efforts.

In a meeting organized on May 23 and moderated by Secretary of Meenakshi Temple Parthasarthy Krishnaswamy, HGH Board of Trustees, Advisors and other community leaders once again got together virtually to share updates and the way forward.

HGH Chairman Dev Mahajan apprised the gathering about the commendable work done by the Hindu Worship Society, Arya Samaj and VPSS with respect to food drives and the blood donation camp. VPSS was going to “targeted communities” to distribute food instead of requiring them to come to the temple. Sanjay Jain from the Arya Samaj and Rajinder Soni from the Hindu Worship Society filled in more details about the events.

On May 31, a blood donation drive will be held at the Arya Samaj School building from 9:00 am to 1.30 pm in collaboration with the Gulf Coast Blood Center. Sanjay Jain, who is spearheading this drive, appealed to all Indo-Americans to register and donate blood. COVID testing is not required. However, donors should not have traveled to Bharat in the last one year. Those who come in between 9-10:30 am will receive a free pack of 5 cloth masks. Groceries will be distributed between 12-1:00 pm

Patanjali Yogpeeth President Shekhar Agrawal stated that preparations for Yoga Guru Swami Ramdev’s visit to Houston for the International Day of Yoga on June 21 has been shelved. A virtual two hour program has been planned instead to mark the day and will be live streamed from India House. Swami Ramdev will join the session from Bharat and yoga enthusiasts can follow Swami Ramdev’s yoga routine from their homes.

Member of the Hindu Heritage Youth Camp Committee Bharat Pallod regretfully reported that for the first time in 35 years, HGH may not be hosting its annual camp for children. He further clarified “we are still working towards making a final decision on HHYC 2020. A traditional 5 day, 125 person camp is likely not possible and we are working towards a creative solution.”

Sewa International, which swung into action as soon as the first tremors of COVID-19 were felt, has been making a strong and positive impact in Houston. President Gitesh Desai, who joined the meeting in the midst of two food drives organized by the Gujarati Samaj of Houston and VPSS providing food for a combined number of 550 families, shared additional information about the relief efforts. He also added that the much sought after internships with Sewa will be available in a week’s time.

Kantibhai Patel and HGH President Thara Narasimhan from Voice of Sanatan Hinduism are offering free airtime for food and blood drive announcements. Tune into their program on Masala Radio from 12-2 pm every Sunday.

Houston’s top cardiologist Dr. Randeep Suneja offered a much needed dose of optimism on the medical strides for COVID-19 treatments. As cities are emerging from lockdown, he warned everyone to continue social distancing measures and avoid unnecessary exposure especially the vulnerable elderly population. Statistical analysis expect the number of hospitalizations to drop by the end of June. Doctors are learning to better manage the disease with hydroxychloroquine and blood thinners. These medications are being administered to patients and are found to be effective in the first 72 hours.

The world’s most brilliant minds are collaborating on a vaccine at a speed that “has never before been seen in the history of mankind.” Seven to ten projects show great promise and there should be a vaccine by September/October. Bharat, he mentioned, is playing a key role and will supply millions of doses of the vaccine to countries around the world including the US.

Bharat is at the forefront of yet another successful endeavor. Durga Bari’s Past President Parthasarathi Chatterjee highlighted the creation of the National Digital Library that is being put together by the IIT’s and will be the biggest data base of information on COVID-19 from testing to research. A virtual online concert featuring singers like Kailash Kher, Shreya Ghoshal and Usha Uthap is also being organized to raise funds for the recent cyclone that has devastated Kolkata.

A few temples have cautiously opened their doors to devotees such as the Meenakshi Temple, VPSS and the Hindu Worship Society. Parathasarathy Krishnaswamy from MTS drew attention to some of the best practices that have been implemented to minimize the risk of infections. Only one entrance/exit is open, temperature screenings will be conducted, offerings of only milk/flowers are permitted and masks are mandatory. The temple is fumigated every 2 days while door knobs are sanitized every hour. The kitchen is open for takeout only. Functions are permitted at 25% capacity.

Earlier in the teleconference, Pujya Bhaktivardhandas Swami, from the BAPS Shri Swaminarayan Mandir Houston, appreciated the good work being done by volunteer leaders of HGH to support and counsel their members in these challenging times.

As inspiration for the attendees own approach to leadership, Swamiji shared excerpts of a speech given by His Holiness Pramukh Swami Maharaj, on 21 May 1950, on the day he was appointed as president of the BAPS Swaminarayan Sanstha at the young age of 28. A humble sense of servant leadership and genuine wish to attribute every success to the blessings of his Gurus, that characterized his life and mission, were evident in this historic address.