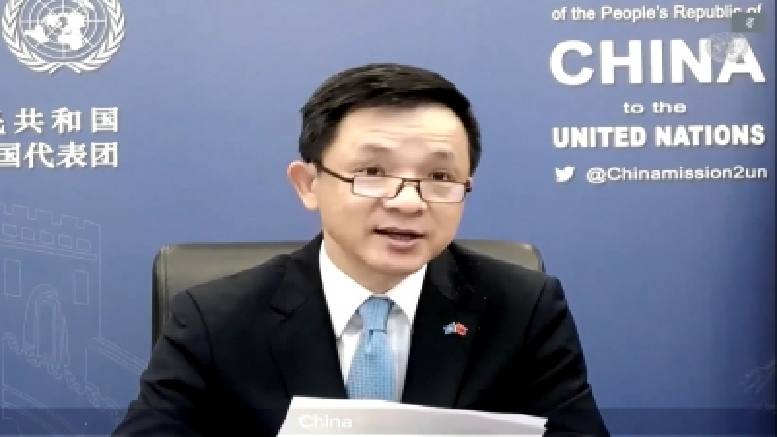 China struck a discordant note at the Security Council high-level meeting on maritime security attacking the Indo-Pacific initiative in which Bharat is active, as well as the US and Japan, while dispensing with normal diplomatic courtesies to Prime Minister Narendra Modi who chaired the session.

Amid the heads of state and government, a deputy Prime Minister and ministers at the Council meeting on Monday, Beijing was represented by only a deputy permanent representative, Dai Bing, who was the sole speaker to fail to follow the diplomatic tradition of acknowledging Modi chairing the session or Bharat’srole in bringing attention to maritime security.

US Secretary of State Antony Blinken thanked Modi for “India’s leadership” on maritime security issues, “especially in championing a free and open Indo-Pacific”

In an attack on Bharat that encompassed the Quad, Dai said that some countries were “intensifying maritime conflicts” in the Asia Pacific region.

He did not name Bharat or the Quad, the group that is made up also of the US, Japan and Australia, but his target was obvious.

“At present, a few countries are pursuing exclusive regional strategies in the Asia Pacific region and attempt to create an intensifying maritime conflicts, undermine the sovereignty and security interests of relevant countries, and weaken regional peace and stability,” he said.

“This runs counter to the aspirations of most countries in the region to seek peace, cooperation and development,” he added.

Bharat and the Quad have made clear that their grouping did not target any country and Bharat’s Permanent Representative T.S. Tirumurti made clear at a news conference last week that the maritime security meeting that Bharat was convening as the Council president was not aimed at any nation.

Although none of the speakers, especially US Secretary of State Antony Blinken, mentioned China, Dai launched a broadside against the US accusing it of becoming the “biggest threat” in the region.

Turning on Japan, which wasn’t even at the meeting, Dai accused it of releasing wastewater from the Fukishima nuclear plant into the ocean asserting that it endangered the health of the people in the coastal regions.

Permanent Member Russia was represented at the meeting by President Vadimir Putin, who made a rare appearance at the Council.

Tunisia was represented by its Permanent Representative Tarek Ladeb.

They all praised Bharat effusively for convening the meeting as Council president and for the first time highlighting maritime security as a pressing global issue and acknowledging Modi’s leadership.

In his criticism of the US, Dai said, “This country itself has become the biggest threat to peace and stability in the South China Sea.”

He said, “The US has been stirring up trouble out of nothing, arbitrarily sending advanced military vessels and aircraft into the South China Sea as provocations and publicly trying to drive a wedge into regional countries, especially countries concerned.”

While China has been involved in disputes with countries in the region like South Korea and ASEAN members the Philippines and Malaysia, Dai tried to make it seem that Beijing was working with the ASEAN.

He said, “With the joint efforts of China and ASEAN countries, the situation in the South China Sea remains generally stable.”

Dai took the unsual leap of linking the Fukushima reactor, which suffered a disaster precipitated by an earthquake and a tsunami in 2011.

“Japan’s unilateral decision to release Fukushima’s wastewater into the ocean is irresponsible,” he said.

“China strongly urges Japan to earnestly fulfill its international obligations by revoking its wrong decision, and prudently handle the issue of Fukushima wastewater, so as to avoid harming the health of the people of coastal countries and the global marine ecology,” he said.

He also crticised the US for not joining the UN Convention on the Law of the Sea (UNCLOS) that seeks to provide a framework for the sharing of ocean resources.

“The US itself does not join UNCLOS, but consider itself a judge of the Convention, pointing fingers at other countries and interfere arbitrarily,” Dai said.

The US has refused sign the UNCLOS under successive administrations since it was adopted in 1982 claiming it would infringe on its sovereignty.

However, Washington’s ally Britain also criticised those not joining or upholding the UNCLOS without naming anyone.

Secretary of State for Defence Ben Wallace said, “We have to be clear that a legally enshrined international treaty, bearing the signature of 168 parties, can’t simply be junked on a whim. UNCLOS applies to all the oceans and all the seas. It is not an a la carte option for some states to pick and choose as they wish.”

Wallace spoke of the importance of Indo-Pacific region that he said was “the world’s growth engine.”

“Like India, the UK (United Kingdom) has a vision for a free, open and secure Indo-Pacific,” he said, adding, “That is why you’ll find the UK more persistently engaged and increasingly proactive in the region.”

Without naming China, Blinken said, “In the South China Sea, we have seen dangerous encounters between vessels at sea and provocative actions to advance unlawful maritime claims. The US has made clear its concerns regarding actions that intimidate and bully other states from lawfully accessing their maritime resources.”

“The US itself is not qualified to make irresponsible remarks on the issue of South China Sea,” he said.

Blinken said, “Some may assert that resolving the dispute in the South China Sea is not the business of the US or any other country that is not a claimant to the islands and waters. But it is the business and, even more, the responsibility of every member-state to defend the rules that we’ve all agreed to follow and peacefully resolve maritime disputes.”