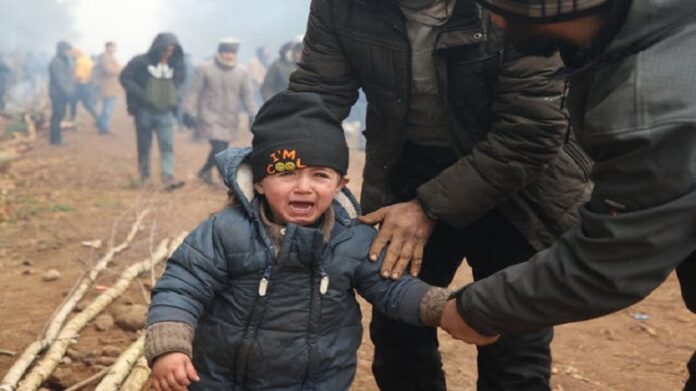 Using children to whip up the rhetoric as part of propaganda is something that the Islamists and various communist regimes have mastered over the years. Though the civilized world considers it unethical, some sections still continue to use it. Handlers behind the Belarus-Poland border conflict are the latest to join the bandwagon.

In Bharat, the same trick is used where photos of Rohingya children and women are used by mainstream media for generating sympathy and to whip up Muslim passions using the ‘Muslim victimhood’ toolkit. But children of persecuted Pakistani Hindu refugees living in inhuman conditions without electricity in Delhi’s sweltering heat are never featured on the front pages.

Stanisław Żaryn, Poland government spokesperson alleged that migrants at his country’s borders with Belarus are being asked to carry kids and to make them look dirty and tired. Children and women are being used in psychological warfare against Poles by Belarus. They are the easiest and the most gullible but highly effective tools to bring in international media and the social justice warriors, into the scheme of things.

Ever-aware to exploit any issue to their advantage, Islamists have been flooding images and videos of distressed migrants to whip up sympathy for increased influx of Muslim migrants into Europe.

The migrants are being guided to use their own children to try to cross the border from Belarus into Poland. Zaryn shared screenshots of Arabic messaging app conservations and voice clips as proof. Videos also emerged where the migrants were seen blowing cigarette smoke into the children’s faces to make them cry, while the mother looked on.

“Take the kids, hug them, look dirty and tired.” ‘Friends in the forest need a child who can comment on a video that will be sent to organizations’ said some messages. “Other entries concern the use of children to produce propaganda material. This is how the Belarusian security services play with our emotions,” Zaryn alleged.

“Propaganda plays a huge role in Belarus’ actions against Poland, which is to force [Poland] to submit to Belarus’s intentions and to put pressure on the government to agree to the migration route. Children and women are mainly used in these psychological activities against Poles,”  Żaryn alleged.

Alexander Lukashenko, the authoritarian leader of Belarus, has ruled with an iron fist for 27 years since Belarus became an independent Republic after the dissolution of the USSR in the early nineties. The country uses brutal tactics and has jailed more than 800 of its political opponents. Many have been tortured and beaten into submission and thousands have moved abroad.

Most countries in the EU, UK, US, Canada have sanctioned Belarus citing gross human rights crimes and for ‘rigging elections’. Lukashenko, who has deep ties with Russia, now wants to pressurize countries around the world to withdraw those sanctions. The tools being deployed are the same as that of the communists. He has used human desperation to lure migrants into a dangerous journey, take their money and force them to break international laws.

Earlier, the US/ NATO/ EU alliance had used the Kurds and Yazidis in Iraq and betrayed them. They are the ethnic-religious minorities of Iraq and are the most common slice of illegal migrants in Belarus.

By May this year, Belarus started promoting ‘tours’ from Iraq. Visa rules were loosened for migrants from middle eastern countries and visas were issued on arrival at Minsk (the capital of Belarus) and other airports in the country. This caused an illusion among Kurds (who wanted to escape repression in Iraq and Syria) that Belarus is the safest way to enter the EU.

Belarus borders the EU via countries like Poland, Lithuania and Latvia. Poland has a boundary with Germany but the other two do not.

Travel agencies sprung up and international zones normally handled by border patrols in airports were handed over to these companies. They started issuing visas to the migrants who started to arrive from the middle east. Meanwhile, the Belarusian finance minister even said that migrants are financially helpful for his country since they bring in cash and fill up hotels.

Flights began and thousand arrived but return flights remained vacant. Some corrections were made later by Iraqi authorities but the migrants flew to Turkey and Dubai and started reaching Belarus.

In Belarus, videos emerged where uniformed border guards were seen prepping the immigrants with knives and fittings. They also demonstrated how to stab Polish guards in unprotected areas, on their neck, arms, legs and armpits. Immigrants were told that they have nothing to fear since the Polish troops will not fire at them but are more likely to shoot in the air. Other projectiles like rocks, bottles, logs and sticks too have to be used.

These guards reportedly started escorting truckloads of migrants to their border with the above-mentioned EU countries. Belarusian border guards scouted for lonely areas where crossing over is easy, used wire cutters to cut fences and asked the migrants to cross over. Many did and illegal taxis started ferrying them to Germany, a paradise for migrants.

As for these illegal immigrants, they did not have a second choice. They were not allowed to approach formal checkpoints to apply for asylum and were not allowed to go back to Minsk even if they pleaded. Belarusian border guards started to point guns in their faces, beat them and forced them to walk westward.

Poland started to push back illegals but the Belarus border guards do not let them return to Minsk to fly back home. Polish border guards started reporting how many they had stopped but in reality, these might well be the same illegal migrants getting caught over and over again.

Poland has a long border with Belarus and some are even unfenced or have no barbwires but just wooden logs for demarcation. Including the reserves, they have deployed around 10,000 personnel. It is believed that double that number of immigrants are waiting at the border. The migrants have to find a way into the EU since death threats await them if they go back now.

Though a communist hangover still hangs over that country, Poland transitioned to democracy after the collapse of the Soviet Union. The Christian conservative Law and Justice Party won elections in both 2015 and 2019. The new prime minister and their president are from the same party. The chairman of the Polish ruling party Jarosław Kaczyński is the country’s de facto leader and it is he who has the final word.

Poland’s population is controlled by the powerful Roman Catholic Church. The country is the most ethnically homogenous country and its Christian population detests Muslims. A vast majority of people are opposed to accepting refugees of any kind. The migrant’s version that they are just passing through the country to reach Germany has not been taken at face value.

Kaczyński had earlier warned that Muslim refugees carry “parasites and protozoa” and that churches would be used as toilets. Now their interior minister and the defense minister actually appeared on the main evening news, on a state television channel and played a pornographic clip involving a man and animals. They said that it was found from an immigrant’s mobile on the border. They insinuated that these illegal immigrants are animals and that their country is being invaded by perverse Muslims.

By September, Poland declared a state of emergency in the border areas, set up checkpoints, and prohibited journalists and humanitarian organizations from entering the area. In October, Kaczyński declared a “radical strengthening of the army.”

Poland has every right to protect its borders, especially since the immigrants have broken laws and destroyed their fences. As per international laws, an asylum seeker has to request the same when one reaches the first country where you are safe. Ideally, they should have requested Belarus for asylum.

The Americans are experiencing similar issues with Mexicans and Central Americans, and some of their rhetoric and tactics to repel illegal immigrants are just as controversial.

There are important lessons in all this for Bharat, which is plagued with an illegal immigration issue of a far higher magnitude. Bharat is facing lakhs of illegal immigrants on its Eastern borders each year, not just thousands as Europe faces. So we are entitled to use every means available to safeguard our borders and repel the demographic invasion which threatens the limited resources our country has.

German police reported that in the past 2 months alone, more than 9,000 Muslims have now entered their country through Poland via Belarus. Those already there allegedly boasted of their achievement and this encouraged more to try their luck. The propaganda using children is already starting to shows its intended effect with calls in German cities like Munich to invite immigrants from the Poland-Belarus border.

That their chancellor Angela Merkel has a communist history has raised anxiety among German nationalists that their country is allowing immigrants in without screening.

The silence of the rich Islamic nations and the self-appointed keepers of the faith like Turkey, Saudi Arabia, Qatar, UAE and Malaysia is interesting. Their reluctance to settle Muslim refugees in their own lands and instead berating the rest of the world to do more, is hypocritical to say the least. It is likely that leaders like Turkey’s Erdogan, who views himself as a modern-day Caliph, are tacitly pushing Muslim immigrants into Europe to further the trans-national Islamist project.

In all this, the desperate Muslim refugees – natives of countries destabilized by jihadis, Arab dictators and Western intervention – have now become fodder in a hybrid war between the Muslim world, Western Europe and pro-Russian Eastern Europe.