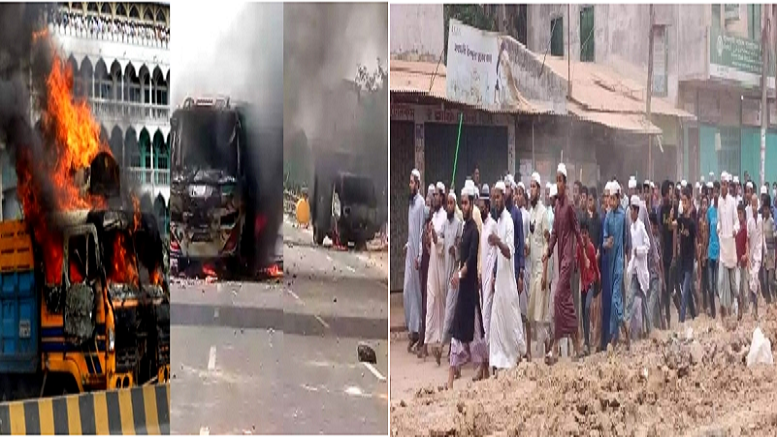 Junaid, the joint secretary general of Hefazat’s central committee, has been arrested from Baridhara area in Dhaka on Saturday.

In the last few days, a total of seven top leaders of the militant outfit, and over 100 leaders and activists of the group, have been arrested in connection with the violence and rampage that rocked Dhaka, and and different districts across the country.

Earlier on Saturday afternoon, the police arrested Jalaluddin Ahmed, an assistant secretary general of the militant outfit, from Mohammadpur area of the capital.

Junaid Al Habib, one of the top leaders of the Hefazat, also the principal of a madrasa in Dhaka, had allegedly played a key role in the violence that was witnessed during Modi’s visit to Bangladesh.

The Bangladesh government appears to have been taking a hardline on the umbrella group of several militant outfits and Qawmi madrasas, the breeding ground of the militants following a series of violence and atrocities on police and government establishments starting March 26, by the name of ‘protest against the arrival of Narendra Modi’ on a state visit.

During the violent protests with the police that continued till March 31 many government facilities, Awami League offices, temples, and houses of the Hindus and Awami league leaders and their relatives were damaged and vandalized and set on fire in Brahmanbaria, Chattogram and several other districts of the country.

Detectives said that Junaid would be interrogated to learn more about his involvement in the recent attacks.

Special security measures have been taken at police stations in the capital.

The precaution has been taken apprehending attacks on the police stations as a number of Hefazat leaders and activists were arrested.