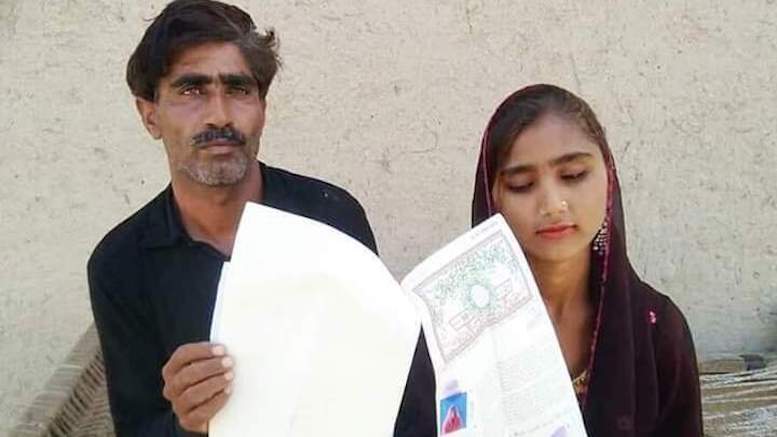 A 14 year-old-Hindu girl Suthi Oad has been abducted, forcibly converted and married to a 40-year-old man Mohammad Aachar Darejo in Chundiko, Sindh province of Pakistan.

Chundiko Sindh , one 14 years old Hindu Girl suthi Oad have been abducted and later been forcedly converted and married to 40 years old Mohammad Aachar darejo ,
This is utterly ridiculous and condemned ,
However corona will end but this injustice will remain same in Pakistan. pic.twitter.com/UGdqfMhn67

The abductor Mohammad Aachar Darejo took a photo with the minor girl and the ‘nikah-nama’ (Muslim marriage certificate). Many social media users have condemned the incident and called on the authorities to hold an inquiry.

Human rights organisations have estimated that every year, around 1000 girls from minority Hindu and Christian communities are abducted, converted and forcefully married to their abductors in Sindh province of Pakistan.

In Jan this year, 14-year-old Mehak Kumari was kidnapped while on her way to school by a twice-married Muslim laborer with 4 children. Few months before that, 14-year-old Christian school-going girl Huma Younus was similarly abducted, converted to Islam and married to a Muslim man in Karachi. Shockingly, courts later ruled the marriage was ‘valid’ as Huma had started menstruating.

In another case from Jan this year, a Hindu girl Bharti Bai was abducted from her marriage ceremony by armed assailants with the help of local police in Hala city of Sindh province, forcibly converted to Islam and married to a Muslim man Shahrukh Gul. Government of India had summoned a senior official from the Pakistan High Commission and made a strong demarche against this human rights violation.

And it’s not just poor Hindus who are on the hit-list of Islamists who operate with impunity in Pakistan. A few days back, a middle-class Hindu family in Karachi was threatened to convert to Islam amid COVID-19 outbreak.

A bill against forced conversions in Sindh was tabled in 2016, but it is yet to be presented in Sindh Assembly despite promises by Sindh government – all due to intense opposition by Muslim clerics and fundamentalists.

Sindh is the only province in Pakistan where Child marriage is illegal. In 2014, the Provincial Assembly of Sindh unanimously passed ‘The Sindh Child Marriage Restraint Act’, which raised the minimum legal age for marriage to 18 years for boys and girls. The act makes Marriage below 18 years a punishable offence but the implementation of the law still remains a hoax.

Despite such inhuman, everyday persecution of Hindus and other minorities in Pakistan, the CAA law passed by the Modi Government which offers expedited path to Bharatiya citizenship for minority refugees from Pakistan, Bangladesh and Afghanistan, has faced vicious opposition from left-liberals & mainstream English-language media of Bharat, and led to violent rioting by Islamists.

Will Delimitation Commission stand the test