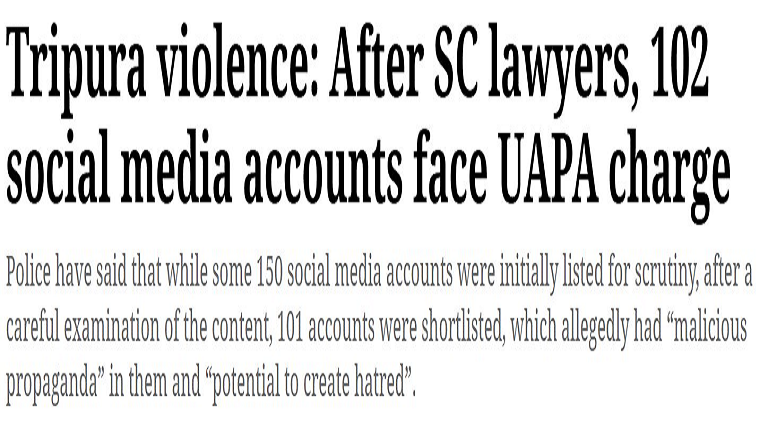 Tripura Police has put UAPA on 102 entities regarding recent violence, including on Indian American Muslim Council (IAMC). IAMC was quick to play victim. What IAMC didn’t tell is its relations with Pan-Islamist networks- Jamaat and terror-linked groups.

IAMC is a US-based Jamaat affiliated group which is hub for all anti-Bharat activities – from lobbying against Bharat to committing COVID-19 donation fraud to spreading fake news.

IAMC was founded in 2002 by Dr. Shaik Ubaid (SU), former General Secretary of ICNA- the American arm of Jamaat-e-Islami (JeI). Though SU conveniently denied his association with ICNA & later IAMC he continued to work with them to target Bharat via Burma Task Force (BTF).

IAMC is headed by Rasheed Ahmed. He was Executive Director (2008-17) of IMANA. IMANA is one of the 3 Islamist charities which collected millions of dollars for helping Bharat in Covid and spent peanuts. IMANA is linked to Pak Jamaat and terror groups including LeT and HM.

Some of the members of IAMC like Kaleem Kawaja have been a vocal supporter of Taliban.

IAMC hired US lobbying firm Fidelis Government Relations (FGR) in 2013-14 for $40K to lobby USCIRF against Bharat. The influence of which can be seen to date Best part: to lobby against Bharat, it collected funds in name of helping Rohingyas and Kosovo.

For effective lobbying, IAMC manufactures evidence via fake news to incite communal violence and reinforces the narrative of minority plight in Bharat- from fabricated stories on CAA to Tripura violence They even created a fake database DOTO to show ‘atrocities’ on minorities.

IAMC went quiet after it was exposed early this year, but there has been a sudden resurgence. Why? Having lobbied USCIRF to designate Bharat as CPC, it wants to create noise to influence the US Congress where USCIRF report will be discussed.

Important to note that this year Shaik Ubaid via BTF had already paid money to lobby firm Fidelis Government Relations to lobby the US Congress. A series of incidences in Bharat – from Assam to fake trolling of Shami to Tripura violence may not be coincidences.

It is showing how such organizations manage to push their agendas despite getting exposed repeatedly and even manage to engage some influencers in Bharat.

(This article has been compiled from the tweet thread of @DisinfoLab)