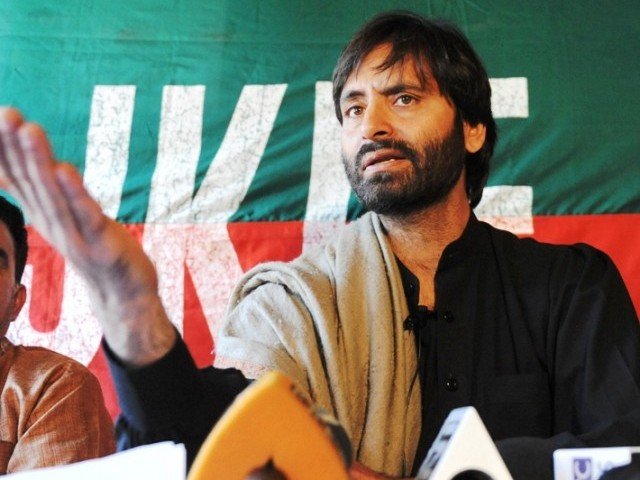 After his three-year-long tryst with terrorism and being in jail for three years, the pioneer of Kashmir’s unceasing gun culture and the Jammu and Kashmir Liberation Front (JKLF) founder Maqbool Bhat’s successor, Yasin Malik, enjoyed “the freedom of both worlds” for 25 years– from 1994 to 2019.

From the day Malik, then a 28-year-old school dropout and the son of a government bus driver was permitted to address his first press conference from the Principal Government Medical College (GMC) Srinagar Dr. Ghulam Qadir Allaqaband’s chair in 1994 to the day of the 40 CRPF men’s killing in a major terror attack in 2019, all criminal cases against him were virtually dumped. He was left free to grow as a politician, visit the world, marry in Pakistan and hold campaigns and demonstrations across the country for “Kashmir’s freedom from Bharat” and against the Bhartiya security forces.

While in Pakistan, Malik shared the stage with the Lashkar-e-Tayyiba ideologue Hafiz Saeed, who is designated as a global terrorist and wanted in Bharat for the November 2008 Mumbai terror attacks, he called himself a “peace activist” and was widely recognized as a “vegetarian Gandhian”. For over two decades, he was invited to international conferences and primetime shows on Bhartiya television channels.

But at the end of the day, Malik’s game fell like a pack of cards as his ‘freedom’ was terminated and he was awarded multiple life terms in the NIA’s terror funding case of 2017 in which he pleaded guilty to all charges. He was arrested immediately after the February 2019 terror strike by Jaish-e-Mohammad and has been in Delhi’s Tihar Jail for over two years.

The killing of the 40 CRPF personnel in a bomb blast on 14 February 2019, ahead of the Lok Sabha elections, came as a turning point. Within days, Malik was lifted from his Srinagar residence. His JKLF, along with Jamaat-e-Islami, was banned. The Central Bureau of Investigation (CBI) got two high-profile cases– Rubaiya Sayeed’s kidnapping on 8 December 1989 and the four Indian Air Force (IAF) personnel’s assassination on 25 January 1990– revived against Malik after a freeze of 10 long years.

On Friday last week, the prime prosecution witness in one of these two cases, Rubaiya Sayeed, daughter of the former Union Home Minister Mufti Mohammad Sayeed and sister of the former J&K Chief Minister Mehbooba Mufti, appeared in court for the first time in the last over 32 years to record her statement. She identified Malik and three of his JKLF associates as her kidnappers. Her statement, which is making the Peoples Democratic Party (PDP) president Mehbooba Mufti ‘politically incorrect’ in the valley’s electoral fray, has the potential of serious consequences over Malik’s fate subject to its survival in the cross-examination.

The CBI completed the investigation and filed challan in both the cases against Malik and his associates in a TADA court in 1990. There has been no explanation as to how these cases did linger in prolonged litigations and the trial didn’t start for 29 years. For 10 years, from April 2009 to April 2019, there was no attempt to get the stay vacated on the trial of these cases in a Srinagar court. After February 2019, the CBI got the stay vacated, and both the cases were transferred to a Jammu court for trial within weeks. In the last 3 years, charges have been framed against Malik and his associates in both cases.

In June 2003, the then Chief Minister Mufti Mohammad Sayeed left the alleged kidnapper of his daughter free to promote his campaign for ‘Azadi’ in Kashmir’s schools and colleges. For granting the Kashmiris “right to decide their own future”, a political euphemism for separation from Bharat, and including them as a “party in the tripartite talks with Bharat and Pakistan”, Malik set the target of obtaining signatures from two million people.

Interestingly Malik began his campaign from Mufti’s own home constituency of Anantnag. He was accompanied by his former militant colleagues and senior JKLF commanders, Javed Ahmad Mir and Noor Mohammad Kalwal, who according to the CBI charge sheet were among the ten kidnappers of Rubaiya Sayeed. Kidnapped on 8 December 1989, Rubaiya was released on 13 December 1989, only after the then VP Singh government at the Centre forced the then Chief Minister Farooq Abdullah to release five JKLF militants in exchange for her.

In an unprecedented political drama, almost all the criminal cases filed against Malik and his associates were virtually dumped.

In exchange, till 2014, came politicians, government officials, and journalists including the one who is now publicly claiming to have acted as a spy for a Pakistani agency while attending events with the top Bhartiya dignitaries.

During Mufti’s PDP-Congress regime in 2005, Malik was permitted to again visit the valley’s educational institutions to promote his campaign for ‘azadi’. In March 2006, he was permitted to attend a Leftist-sponsored conference in Pakistan.

During the same coalition in 2007, when Ghulam Nabi Azad was the Chief Minister, Malik claimed to have obtained 70,000 signatures to his campaign “Safar-e-Azadi” in 3,500 villages and towns across the valley. A number of top notch Indian politicians, academicians, lawyers, retired judges and journalists were encouraged to be Malik’s guests and hosts respectively in Srinagar and New Delhi. Many of them publicly sympathised with Malik’s cause of Kashmir’s separation from Bharat. It was during this period that Malik not only visited Pakistan and many world countries at his will but also married a Pakistani woman and got her home.

During one of such visits to Pakistan in February 2013, Malik publicly shared the stage with the Lashkar-e-Tayyiba ideologue Hafiz Saeed, prime accused in the Mumbai terror attack of November 2008, flew back to Srinagar and drove straight to his home without being questioned by the Bhartiya authorities. On another occasion, Malik was permitted to collect donations worth Rs one crore in the valley and carry the same by hand for distribution in the Pakistan-occupied Kashmir (PoK).

In April 2005, Malik organised an extraordinary exhibition to promote Pakistan’s cause and slogan for “self-determination” under the banner of “Voices for Peace, Voices for Freedom” at Gandhi Peace Foundation in New Delhi. He put on display 1000 kilos of paper claiming to contain 1.5 million signatures.

A host of prominent personalities, diplomats and intellectuals attended the exhibition which also exhibited 340-hour-long unedited video tapes about “detention and interrogation camps run by Bhartiya forces” at various locations in the Valley of Kashmir, around 5000 demonstrations in 5000 Kashmiri villages and coverage of the signature-gathering campaigns during the last few years as well as over 5,000 still photographs.

Booker prize winner Arundhati Roy, who effervescently posed for photographs with the JKLF chief, said after visiting the exhibition that Bharat was administering the people of Kashmir with the might of “800,000 occupation troops”. Prof. Kamal Mitra Chenoy of the Jawaharlal Nehru University (JNU) said: “Oppression of the Kashmiris, use of force against civilians through unlawful acts is basically the reason which hits the idea of Bharat. Those who oppress others can’t live themselves free”.

Those who praised Malik on the occasion included noted Gandhian activist Nirmala Desh Pandey, Bharat’s former envoy to the UK and noted journalist Kuldeep Nayar, who flew to Srinagar frequently to break Malik’s “fast unto death”. Nayar said that he and his colleagues had gone to Kashmir and prepared a report “which Pakistan later exploited in the United Nations”. Columnist Praful Bidwai said: “We’ve to innovate new methods to fight for justice and Yasin Malik has made an innovative and imaginative method.”

Malik blasted MORI, a British agency, which had carried out a survey in 2002 and established that the Kashmiris were satisfied with Bhartiya rule. Malik said that MORI’s survey covered only a small number of Kashmiris and that his supporters had visited almost 5,000 villages over the last two years. “We have recorded the most transparent and democratic verdict by people and every form marks the identity of the person interviewed. Every village told us a new story”, Malik said while unfolding his core agenda.

Now that the prosecution witnesses have started deposing in the CBI’s two cases, people in the valley are wondering if Malik is stepping into the shoes of his inspiration of azadi–Maqbool Bhat.