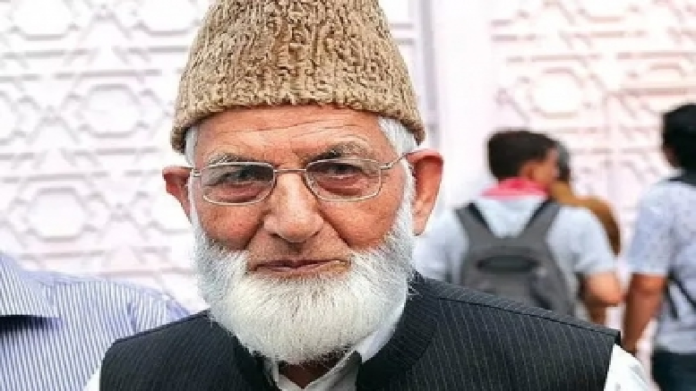 Close on the heels of the sealing of several properties, valued at Rs 100 crore, in Baramulla, Bandipora, Ganderbal and Kupwara districts on December 17, the District Magistrate in Srinagar has sealed three more properties of the banned organisation, Jammu and Kashmir Jamaat-e-Islami.

The properties sealed for entry and usage on Tuesday over a recommendation of the State Investigation Agency (SIA), include a two-storey house constructed on 17 Marlas of proprietary land given to the separatist leader Syed Ali Shah Geelani over 35 years back in the Barzulla neighbourhood of Srinagar.

In an order issued on 19 December 2022, the Srinagar District Magistrate Mohammad Aijaz Assad has quoted communication No. SIA/SN/FIR-17/2019/7738-42 dated 16-12-2022 from the SIA, saying that during investigation of case FIR No: 17/2019 u/s 10, 11, 13 UA(P) Act of Police Station Batmaloo-now being investigated by SIA-three particular properties owned by or under possession of banned JeI had surfaced in his jurisdiction and the same were required to be notified under section 8 of the Unlawful Activities (Prevention) Act.

One of the properties includes land measuring 1 Kanal and 7 Marlas at Khushipora Shalteng Srinagar, under survey No. 279 and 280, in the name of JeI through its District President Bashir Ahmad Lone S/o Abdul Samad Lone R/o Harwan, Srinagar vide mutation No. 2949. Another property on 1 Kanal and 3 Marlas of land, acquired in the same person’s name through mutation No: 2950, has been sealed at Khushipora Shalteng.

Both the sealed properties had been acquired by the JeI outside the Army’s Divisional Headquarters of Sharifabad, on the outskirts of Srinagar.

The third property is a two-storey residential structure constructed over proprietary land measuring 17 Marla and 199 sft under survey No. 1388/307 at Barzulla, Srinagar. It had been placed in the name of one Firdaus Asmi S/o Ghulam Nabi Asmi vide mutation No: 2646 but physically given in possession of the then JeI leader Syed Ali Shah Geelani. Geelani severed his over 50-year-long association with the JeI before a split in the separatist conglomerate Hurriyat Conference in 2003 and floated his own organisation, Tehreek-e-Hurriyat, and a pro-Pakistan faction of the Hurriyat Conference. However, the JeI did not recover the property at Barzulla from him for a long time. Geelani died in September 2021.

The DM said that upon obtaining the report from concerned Tehsildar and after perusal of revenue records pertaining to the above properties, it was found that these properties were owned and possessed by the banned JeI through its members. “…on perusal of the records and other connected documents, I, District Magistrate Srinagar, am satisfied that there is sufficient material to notify the above mentioned properties under the said Act,” the order said. It also ordered seizure of the bank accounts of the JeI property occupants.

Sources said that Tuesday’s sealing of the JeI properties was a result of the investigation into one FIR originally registered with Police Station Batmaloo, Srinagar. They said that the authorities were verifying the title and deals related to Geelani’s another house at Hyderpora where he had also set up the office of his Tehreek-e-Hurriyat. With all four of his daughters married outside and both his sons living in their own houses separately in Srinagar, only his wife is living at his Hyderpora house after Geelani’s death.

Sources said that the SIA was investigating whether Geelani’s house at Hyderpora had been acquired by JeI or its guerrilla arm.

JeI, which once introduced itself as the political patron of the now banned terror outfit Hizbul Mujahideen, was notified as a proscribed organisation days after the killing of 40 CRPF personnel in an unprecedented car bomb blast on the Srinagar-Jammu highway in February 2019. The suicide attack near Awantipora triggered a major crackdown on Kashmir’s separatist and guerrilla organisations. Hundreds of the prominent separatist activists, stone pelters and terror supporters were either jailed or placed under ‘house arrest’.

Early this year, the Revenue and Police authorities began identifying, attaching and sealing the JeI-owned properties on the recommendations of the SIA which has taken over the investigation from the District Police of Srinagar.

Islamist outfits come out openly against PFI recoveries in Kerala