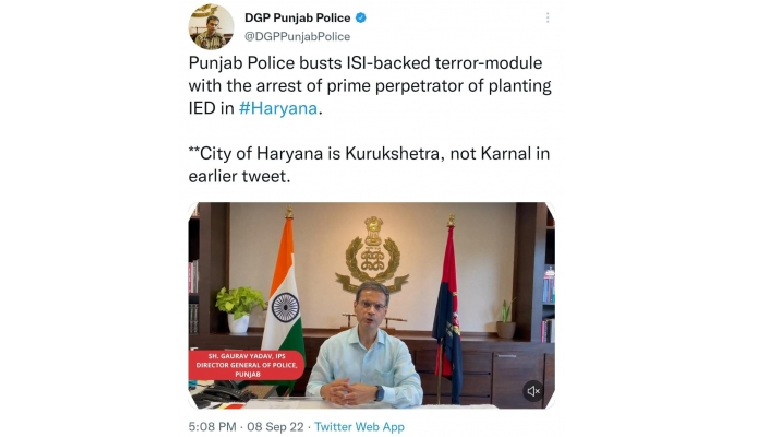 Yadav also said that at least 25 accomplices, who are aiding them in carrying out illegal activities across the state, have been identified.

The DGP said the arrested persons include the prime perpetrator of planting an improvised explosive device (IED) at Shahabad in Haryana recently, who has been identified as Nachhatar Singh, alias Moti, a resident of Tarn Taran.

The other two arrested accused have been identified as Sukhdev Singh, alias Shera, and Harpreet Singh, alias Happy.

The police have recovered one IED containing RDX weighing 1.5 kg along with detonator, two pistols, eight cartridges, and a motorcycle without a registration number from their possession.

The DGP said that as per preliminary investigation, it has been revealed that the accused were in direct contact with Lakhbir Landa, and were involved in extortion and cross-border smuggling of arms, explosives and drugs on a large scale.

The development came amid the ongoing war against drugs and gangsters waged by Punjab Police on the directions of Chief Minister Bhagwant Mann to make the state a drugs-free and crime-free.

Senior Superintendent of Police (SSP) Ranjit Singh Dhillon said following inputs, the police put up a checkpost and arrested the three accused after recovering two pistols from their possession.

Later, on the disclosures made by Nachhatar Singh, the police also recovered an IED concealed on the outskirts of Rattoke village in Tarn Taran district.

He said the Landa-Rinda gang has a network of around 40-50 people, of which, the police have already identified 25 operatives and a hunt is on to nab them.