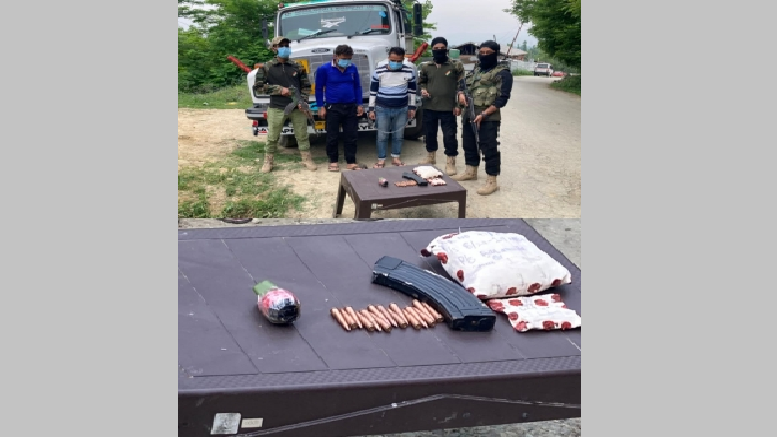 Jammu and Kashmir police along with security forces busted an inter-district narcro-terror module by arresting two terrorist associates in Baramulla, and recovered heroin — valued at Rs 1.5 crore, and arms and ammunition from their possession, officials said on Monday.

Police said Baramulla Police and Army (52RR) during routine checking at Chenad crossing, Baramulla intercepted a vehicle (Tipper) with two persons on board.

“During checking, 800 grams of heroin like substance was recovered from the vehicle,” the police said.

“They have been arrested and shifted to police station where they remain in custody. The vehicle used in the commission of crime has also been seized,” police said.

“During questioning, they admitted that they are working with proscribed terror outfit LeT and were in close contact with handlers of the LeT from across besides, working with LeT associates/ OGWs. Upon their disclosure, one AK-47 Magazine, 15 live rounds of AK-47 and one Chinese grenade have also been recovered from the stepney which they had concealed inside,” police said.

“It is pertinent to mention here that both the terrorist associates were given task to sell the contraband and the money so realized was supposed to be used for funding terror activities.”

A case has been registered and investigation set in motion.