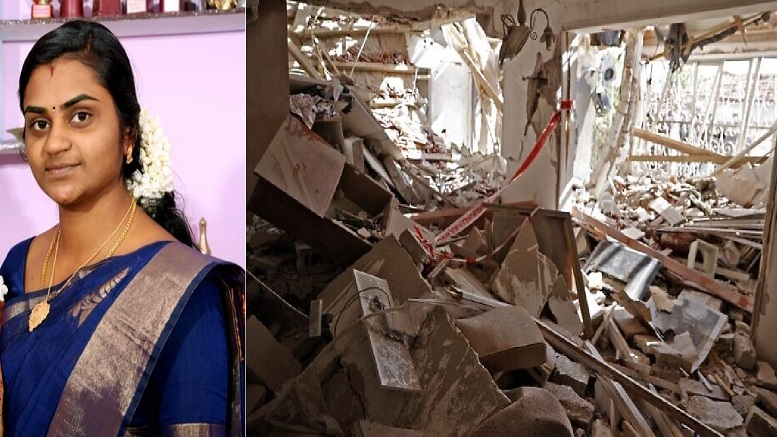 A caregiver in her early thirties from Idukki in Kerala named Soumya Santhosh was killed by terrorists at Ashkelon in Israel. The hospital where she was caring for an 80-year-old Israeli woman came under multiple missile attacks from Hamas Islamic terrorists based out of Palestine, killing both of them. Back home Soumya is survived by her husband and a nine-year-old son Adon in her hometown of Cheruthoni.

Ron Malka, the Israeli Ambassador in Bharat tweeted his condolences and assured the family that both he and his country are here for them. He compared Adon to another small kid named Moses who had come down to Bharat from Israel. Moses lost both his parents when terrorists gunned them down during the 2008 Mumbai attacks.

The Israelis have handed over the body to our Embassy there and the Ministry of External Affairs confirmed that it will be flown home soon. Soumya’s family confirmed that the Israeli government was in contact with them.

I just spoke to the family of Ms. Soumya Santosh, the victim of the Hamas terrorist strike. I expressed my sorrow for their unfortunate loss & extended my condolences on behalf of the state of Israel. The whole country is mourning her loss & we are here for them. pic.twitter.com/btmoewYMSS

The situation had become too dangerous there and Soumya was planning to come back when this bombing happened. She had been showing Santhosh the flashes that accompany missiles since last week. Santhosh said that he asked Soumya to return the old lady to her folks and move from the vicinity to someplace safer. She spoke to the old lady’s son who agreed and informed Soumya to pack her stuff and wait for his sister to come to collect them both.

She packed both their bags and told Santhosh that she might as well have some porridge before leaving. She was on a video call with Santhosh when a Hamas launched rocket fell right into her room. Had it fallen five minutes later, they would have escaped since the lady who was supposed to pick them would have arrived. Santhosh sensing danger informed his family who contacted Soumya’s friends in Ashkelon. They confirmed the unfortunate death.

Soumya and her husband Santhosh were neighbors who fell in love, courted for three years, and got married in 2010. Though Soumya is a Hindu and her husband a Christian, media reports suggested that neither family had any issues with their marriage.

She left for Israel after the birth of her son along with Santhosh’s sister who is also a caregiver there. The last time she had come down was to attend her sister’s wedding, in 2019. She was supposed to come back earlier this year but her travel plans got extended due to the Covid pandemic. Santhosh remembered that she was excited when speaking about plans to take Adon for outings.

It was only ironic that this unfortunate news reached us a day before World Nurses Day. It is estimated that out of the 20 lakh nurses in Bharat 18 lakh are from Kerala. It is a similar case all over the world and lakhs have emigrated to all corners. Caregivers like Soumya usually tend to the old and the feeble and are in demand all over the world.

Joblessness in their home state has forced many women to search for better opportunities elsewhere. They are vulnerable to a variety of issues like slavery, torture, non-payment of dues but still many persist on immigration.

Though many local leaders criticized Israel, none mentioned the role of Hamas in starting the fire. Pinarayi Vijayan condoled the death on a Facebook post and even though he didn’t mention either Palestine or Hamas as the perpetrators, but was forced to withdraw the portion on Soumya soon. The CPM tried to whitewash the deletion saying that it was done since Soumya was not a nurse but that stunt ended up doing more damage. The leader of the opposition Congress, Ramesh Chennithala mentioned the missile attack in a post but comfortably forgot the Hamas part.

The Communists have always been pro-Palestine and many leaders turned away when the lady was killed. Even Congress’ ex-CM Oommen Chandy agreed on Facebook that this was a terror attack but later surreptitiously changed it to a rocket attack. This abrupt removal of ‘terrorist attack’ comments shows that these opportunistic politicians value vote banks more than the truth.

A newly inducted MLA and ex-NCP leader currently aligned with the Congress removed the terrorist tag that he had given the Palestinians, earlier. Some Congress leaders went as far as to publicly apologize for having earlier said that Soumya was killed following a Palestine terrorist rocket attack.

Local Islamists made sure that whoever mentioned the atrocities by Hamas were trolled and threatened, all the while supporting the Palestine terrorist attacks that began it all. Many politicians probably taking a cue from the Chief Minister himself, either deleted their social media posts or updated it. That is the power that the Islamist lobby has over local social media. Most Kerala media outlets shamelessly towed the Jihadi line.

Even the feminist secular/ liberal kind like Swara Bhaskar who were wailing for the Palestinians went silent when it came to a Bharatiya lady who was murdered by terrorists.

Jihadi cells now appear to rule Kerala. Politicians have now become mere puppets in the hands of a handful of Islamists who do not consider freedom of speech as a basic human right. They openly threatened all and sundry online which led to many posts supporting Soumya and her family getting deleted.