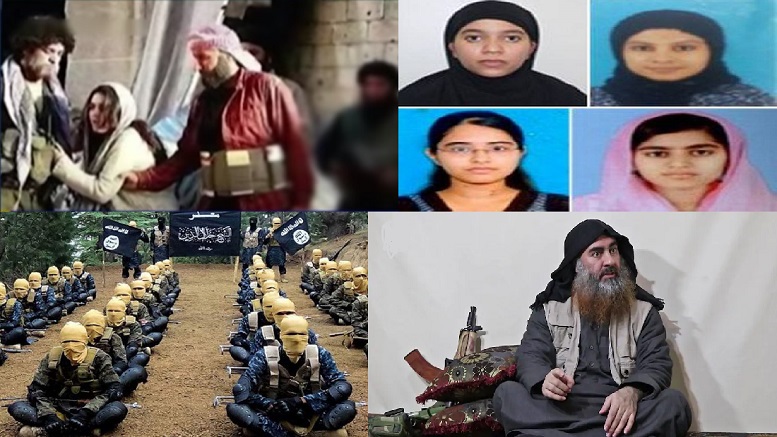 The story of 4 women from Kerala who had joined the terror outfit ISIS, now incarcerated in Afghan prisons, is an old story that had surfaced last year when footage of their interrogation in December 2019 by Bharatiya agents was made public.

Their love for living in a Caliphate (land governed completely by sharia law) and barely-concealed contempt for Bharat (‘land of kafirs’ as per Islamists) was visible from their facial expressions and the way they spoke. Clearly, these women are too radicalized for comfort and any sane individual would reject any talk of their returning to Bharat.

Without any official word from the central government, The Hindu tried lately to bring this closed chapter back into the limelight. They said that as per a ‘senior government official’, the four Keralite women lodged in an Afghanistan prison, who accompanied their husbands to join the ISIS (or Islamic State, IS) in Khorasan Province (ISKP), are unlikely to be allowed to return to the country.

Ever since, a coordinated campaign appears to have started with some secular politicians, PFI and English-language mainstream media drumming up emotional support for their return.

Even as intelligence agencies said that the women pose a security risk, Kerala Chief Minister referred to their terrorist husbands as ‘fighters’. In a move smacking of Islamist appeasement, Vijayan said the central government should decide on bringing back the widows of IS ‘fighters’ back from Afghanistan.

Congress leader and senior SC advocate, Abhishek Manu Singhvi trivialized the serious matter by calling for terrorists who had left Bharat to join ISIS, to be allowed back and let off after they ‘expressed remorse and did some community service’. ISIS founder Baghdadi in his last message to his followers before he was killed wanted those associated with the organization to try and go back to their home countries and engage in activities there. This might have been the reason why both Britain and France prevented ISIS women terrorists from coming home. France learned it the hard way when most of the terrorists involved in the November 2015 Paris attacks were French nationals who had joined ISIS and fought in Syria. The French allowed them to return home unchecked along with the flow of migrants and refugees from Syria.

In Bharat some ‘liberals’, who are ever ready to place their personal ideology above national interests, found their hearts melted by the ‘plight of the vulnerable women’. Many in the media have been trying to paint a rosy picture of them being innocent brides with babies.

That these were the highly-educated (engineers, MBAs, dentists) wives of slain ISIS terrorists, who were seeking their way back home after having left it to wage a Jihad against kafirs, was of no concern to Lutyens’ liberals. The central government had immediately sensed the dangers involved and had left it to the Afghans to act as per their laws.

These women had surrendered in November 2019 in Afghanistan after their partners in crime were eliminated/ self detonated while fighting for the ISIS cause. The only reason they are looking to come back to Bharat now is that with the Caliphate dismantled and ISIS fragmented, they have nowhere else to go! And what place better to return than a soft state like Bharat where last minute midnight hearings are held even for convicted terrorists.

Many of those killed or the survivors were either Christians or Hindus by birth, who had converted to Islam and then joined ISIS. Nimisha (the Hindu convert) alias Fathima Isa said, ‟I can’t say that I want to live in Afghanistan, this is not my place. India was my place, so if they will take me if they won’t put me in jail and I’m not oppressed, then I would want to go back to India!” However, despite the attempt to project a sugarcoated ‘affection’ for Bharat and position themselves as victims, their love for the Caliphate shone through and it was clear to intelligence agencies that their indoctrination was beyond repair.

They are all well educated and from well-off families and were mature adults when they left in search of the Caliphate, and the perfect ‘Islamic way of life’. They would know perfectly well the sorts of crimes against humanity their IS terrorist husbands committed, such as the barbaric rape and genocide of Yezidis. Thus they were knowing facilitators of these crimes even if they did not themselves commit any physical violence.

Five of those who joined ISIS studied together in a private dental college in Kasargod called the Century International Dental School including Nimisha. The ‘college’ has no accreditation, does not pay any taxes, and has no clearances from the Pollution Control Board but still operates 15 years after it opened. It has so far produced around 1000 ‘dentists’. Nimisha’s hostel roommate convinced her to convert. Peace International took them to Afghanistan.

Nimisha’s mother Bindu cried hoarsely and asked why Dr. Sajaad Saleem who runs City Pizza Corner and openly admits that he is Mujahideen, roams free in Kerala. She alleged that it was he who radicalized and converted her daughter in the first place. No agency bothered to investigate their roles. This is exactly what she has been trying to tell our politicians from 2016 when these terrorists left Bharat. Muslim appeasement ensured that both the Congress and the Communists failed to even accept that such brainwashing and radicalization is happening in Kerala society.

Islamic televangelist and terror indoctrinator Zakir Naik was probably the single-biggest source of radicalization during the UPA era. Lauded as a ‘modern, progressive’ Islamic preacher by likes of Shekhar Gupta and Digvijay Singh, he sat pretty in Mumbai using his organization, the Islamic Research Foundation (IRF) to pay cash to lure converts to Islam.

It is estimated that in a 3-4 year period, his organization converted around 800 people by paying them Rs. 50K each amounting to a total of Rs. 4 crore. The funds came from several countries, including Saudi Arabia and the UAE. Zakir’s close relationship with the Saudi royal family and his closeness with the UAE royals gave him protection to run his Peace TV media and education network from Dubai.

Back in 2016, Arshid Qureshi, a preacher and Zakir’s PRO at IRF was arrested following the disappearance of the Keralite migrants. He had converted, radicalized, and then sent these Bharatiyas to wage war for ISIS. The missing person’s case was changed to a UAPA case after Mariyam’s brother Ebin Jacob informed sleuths that Qureshi had tried to make him join the IS group.

Radicalization was such that a 22-yr-old Christian Keralite Merrin Jacob Pallath alias Mariyam from Ernakulam and her husband Bestin Vincent alias Yahiya had told her brother Ebin after their conversion to Islam (in 2014) that she was ready to use guns to protect her Muslim brethren. Yahiya kept suggesting to Ebin that Islam was the only true religion and that all non-Muslims are `kafirs’ who must be killed.

However, despite repeated attempts, Ebin refused to embrace Islam and returned to Kochi. Mariyam’s parents later revealed to security agencies that both Mariyam and Yahiya had been radicalized by Naik whom they met at his Dongri office in Mumbai. Ebin also asserts in his statement that he suspects his sister to have joined IS under the influence of Yahiya and Qureshi. Ebin also said that he had seen another Keralite Ashfaq Majeed in Mumbai when he met Qureshi.

A similar debate has raged in the West too around whether these so-called “ISIS brides” – women citizens of Western countries who married ISIS terrorists – were innocent bystanders. But we only have to speak to the Yezidi survivors of ISIS genocide to realize that these women played their part in the horrors that went on in the Caliphate.

“In some cases, [the wives] were the ones who made women shower and put on clean clothes and makeup before they were brought to the men to be raped….[the wives] would lock our Yazidi women in the houses so they could not escape. They would force them to do manual labor, humiliate them in captivity; they were beaten and tortured by the ISIS wives. They were absolutely complicit, and they knew very well what they were doing,” says Pari Ibrahim, executive director of the Free Yezidi Foundation.

Ibrahim wants all those who went to join the ISIS caliphate to be tried for genocide and not merely for terrorism.

Previous US President Trump rejected the plea of one such woman, Hoda Muthana (24), to return home. And the UK government has stripped Shamima Begum, a 19-year-old from London, of her citizenship, preventing her from returning to the country. The UK Supreme Court has ruled that Begum, of Bangladeshi descent, can challenge the decision but from outside the country due to security reasons.

In Bharat, the trial of ISIS terrorist Areeb Majeed, who returned to Bharat in 2014, has been dragging on for years and he is now out on bail. One of the reasons for granting bail given by Bombay HC was that Majeed and his family are well-educated and he observed proper decorum in court!

Hence it is in the nation’s best interest that the ISIS women terrorists from Kerala are not allowed back in the country. Trusting our criminal justice system to deal with them firmly would be too much to ask.