Why is Turkish ‘aid organisation’ IHH, a PFI partner, upset with Organiser magazine? 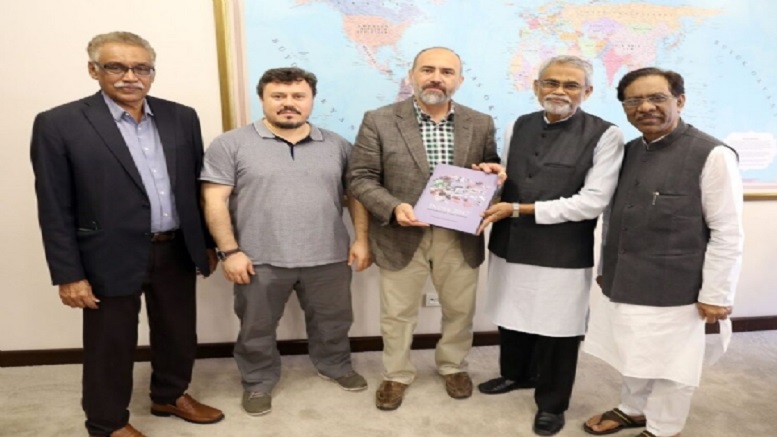 Towards the end of last year, Organiser magazine had revealed that the Popular Front of India (PFI) was partnering with an al-Qaeda linked ‘charitable organization’ based out of Turkey. An entity called the Foundation for Human Rights and Freedoms and Humanitarian Relief (İnsan Hak ve Hürriyetleri ve İnsani Yardım Vakfı) or IHH had invited top leaders of the terrorist outfit PFI which is under investigation for myriad acts of terror and rioting.

IHH now has sent legal notices to the Organiser for calling it a ‘jihadi outfit’. The magazine explained that intimidation and scare tactics would not prevent them from calling a spade a spade. The funny part is that Turkish anti-terrorist police themselves had raided IHH offices after suspecting them of links with al-Qaeda way back in 2014.

As per Nordic Monitor (a Stockholm-based think tank of journalists that specializes in Turkish state support of crimes) IHH invited key PFI office bearers to Turkey to felicitate them in 2018. IHH is Erdogan’s propaganda wing and for its part in war crimes, IHH is banned in Israel, Germany, and Holland.

P Koya and E M Abdul Rahiman, both products of the dangerous and subsequently banned Students Islamic Movement of India (SIMI), are now the National Executive Council members of the PFI. It is a well-known secret that top leadership of the radical PFI is in fact cross overs from SIMI.

Now it is also being alleged that PFI worked hard to incite riots in Bharat. PFI leaders have been arrested and quizzed in regard to the foreign funding they received and funneled for recent riots that happened in Bengaluru and Delhi. The arrest of a few PFI agents thwarted their plans to stir communal violence in other states. Alert intelligence agencies played a major part in those operations.

International Institute for Counter-Terrorism published a report on how IHH and the state of Turkey are both interlinked.

The IHH board of trustees is a bunch of cronies with close ties to both President Recep Erdogan and his party, the Justice and Development Party (AKP). In power since 2003, Erdogan is the raving Islamist ironman of Turkey who has vowed to take his country back to the medieval ‘golden age of Islam’. Prime examples include the re-conversion of the Hagia Sophia into a mosque – the building was originally a pagan temple, first appropriated by Christians and later by Muslims, before founder of modern Turkey Kemal Attaturk made it into a museum. Erdogan had made it clear that 1500 such places would be ‘reopened’ for Muslim worship.

War crimes of the deplorable type are used by the group. IHH is accused of using its ambulances in conflict-hit spots like Syria, Libya, and Gaza to smuggle in foreign fighters and weapons from Turkey. They are reinforcements and supplies for Al Qaeda forces.

Turkey is a country where judges and senior military officers who don’t oblige to the whims and fancies of its dictator are arrested, raped, and tortured in the name of an alleged coup. The Turkish National Intelligence (MIT) controls the IHH and its trucks are never even stopped, forget being searched. Turkey uses its international influence to help IHH in its global operations.

There are dreams amongst Muslim majority countries to bring back the ‘Caliphate’ and naturally, there has to be the ‘Caliph’. The Caliphate is a religious-political system governed by Islam and the Caliph is their supreme leader. The last Caliphate was the Ottoman Caliphate centred in Turkey which ended in 1922. In his quest to be the next Caliph, Erdogan is allying with countries and Muslim organisations that are receptive to such ideologies.

For more than 400 years the Caliph was also based in Istanbul until dethroned after formation of the Turkish Republic. It was to save this dying Islamist Ottoman Caliphate that Indian Muslims led by likes of Maulana Abul Kalam Azad and others, with support of Gandhi, launched the Khilafat movement in British India in 1919, which resulted in the bloody pogrom of Kerala Hindus during the Moplah violence of 1921.

Other dangerous entities masquerading as charities have sprung up from Turkey. Of particular interest to Bharat’s authorities should be the Turkey Youth Foundation (TUGVA) which reports to Erdogan’s son Bilal. This group has links with Islamic outfits based out of Kerala, namely the Student Islamic Organisation (SIO). SIO is the new student wing of the Jamaat-e-Islami Hind (JIH), launched after JIH’s  original student wing SIMI grew too hot to handle.

They operate with impunity by offering Muslim students “scholarships’ to lure them to Turkey, where they are indoctrinated in anti-Bharat propaganda. It is also alleged that they cooperate with the Pakistani Intelligence Agency ISI which handles students, especially the ones that arrive from Kashmir. Imran Khan is also a known puppet of Erdogan.

Reports also claim the Turkish Embassy in Delhi has tie-ups with local NGOs which help in recruiting radical Muslim youth who are then taken to Turkey on so-called ‘exposure trips’. Once there, these students are indoctrinated and encouraged to speak against Bharat. Financial incentives under the garb of scholarships draw students in large numbers.

Turkish state-run media regularly conceals crimes by the PFI and propagates that Bharat’s police ‘abuses’ PFI members. PFI returns the favor by applauding the Erdogan Government and criticizing the central government and the Indian Army. They also support known terrorists like Zakir Naik. It is also alleged that Turkey offers obscene amounts for preaching radical Islam in Kerala.

PFI and its cadre were involved in procuring explosives used in terrorist acts including the 2011 Mumbai, 2012 Pune, and 2013 Hyderabad bomb blasts. The Pune 2012 blasts were suspected to be retaliation for a central government recommendation to extend the ban on SIMI for a few more years. Security experts later found that a defective design was the reason why bombs did not fully explode. We might not be lucky next time around.