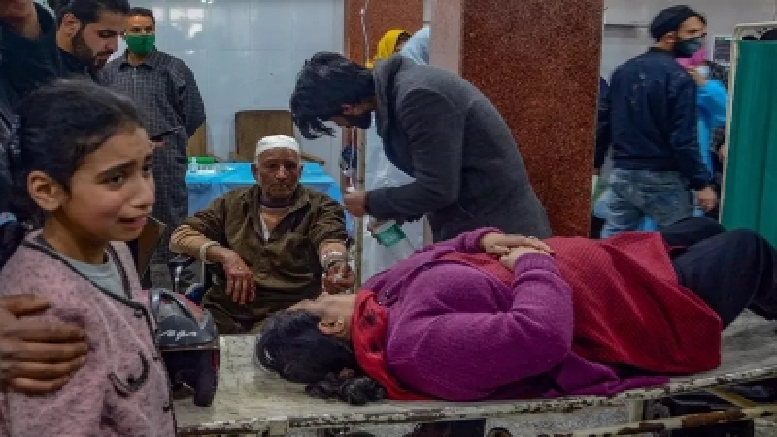 Settled on a Dal Lake Island neighbourhood beside the National Institute of Technology in Hazratbal area of Srinagar, Nazir Ahmad Tinda’s family heard in the evening on Sunday (March 6), that his 19-year-old Rafia was among the 25 civilians injured in a grenade attack. The blast had occurred yards away from a bulletproof vehicle of the Jammu and Kashmir Police on the western end of Amira Kadal, a bridge on the river Jhelum.

The entry point of the Gonikhan marketplace, which has witnessed scores of terror strikes in the last 32 years, remains usually crowded with shoppers and commuters. More than a hundred civilians are estimated to have died in such attacks. On January 25 some civilians had sustained injuries in a grenade attack at the nearby Hari Singh High Street. However, since long no major incident of violence had occurred in that business hub, nestled between Hari Singh High Street, Amira Kadal and Maharaja Bazar.

Mohammad Aslam Makhdoomi (70) of the Makhdoom Sahab was the first among the critically injured who was reported dead at a hospital. Hoping against hope, Tinda’s family, relatives and neighbours kept awake. They all hoped Rafia would recover at a hospital. In the morning on Monday, they were told that she was no more.

The sprawling Shia locality in the Dal Lake was as usual preparing for the March 21 Nauroz celebrations. Shab-e-Baraat, a festival of candle lights to celebrate the 12th Imam Mehdi’s birth anniversary, was also just a fortnight away.

Shias from across the valley descend on these tiny islands to buy the best stocks of the lotus stem Nadru and spinach, the famous Nauroz culinary specialities. Suddenly a pall of gloom descended on Friday (March 4), as around 60 Shias were reported dead and 200 injured in a suicide attack inside an Imambara in Peshawar, Pakistan.

The terror strike in Peshawar neutralised not only the pre-Nauroz festivity but also the special cheer at Tinda’s residence. Rafia had lately passed her class 12 exam with flying colours and she was preparing for admission in a women’s college. On Sunday, she had walked to Gonikhan to buy some apparel.

Rafia’s last rites were conducted amid typical mourning with the hordes of females reciting elegies — nowha and marthiya–in remembrance of Hazrat Imam Hussain and other Imams of the Shias, beating chests and crying for justice. The anger is perceptibly directed at the separatist guerrillas. Nobody claims the attacks in which civilians die. Nobody knows who exactly hurled the grenade but everybody knows that such fatalities came alongside the guns and grenades from Pakistan in 1988-89.

Due to the fear of reprisals, the valley doesn’t protest much against the terror acts done or perceived to be done by the separatist terrorists. However, the anger and anguish remain writ large on every face even as the Kashmiris are heard cursing such actors of violence at homes and at private gatherings. Still, motley groups of youths went out on the streets to protest the killing of the 60 Shia Muslims. A group of youth was preparing to stage a protest with a candlelight march against the grenade attack at Amira Kadal and in solidarity with the victim families, on Monday evening, from Zero Bridge to the Press Enclave.

The public anger forced reactions even from the mainstream politicians who are otherwise known for being soft to the terrorists or glorifying terrorists and calling for talks with the terrorists, separatists and Pakistan. A barrage of condemnations poured in from the former Chief Ministers — Farooq Abdullah, Omar Abdullah and Mehbooba Mufti — as also from several leaders of the Congress, Apni Party and the Peoples’ Conference. Many of them dismissed it as a ‘dastardly attack’.

Srinagar’s Senior Superintendent of Police Rakesh Balwal, Inspector General of Police for Kashmir Vijay Kumar and IG CRPF Charu Sinha are sifting through CCTV footage in their attempts to get a clue with regard to identification and whereabouts of the man who lobbed the grenade. However, till late on Monday they were not able to get a lead. Some senior officials insisted that the Police and intelligence agencies had already received inputs about some possible grenade attacks by the terrorists in and around the summer capital. They had mounted the guard but it failed to pre-empt the one at Amira Kadal.