Why did most Cricket and Bollywood superstars refrain from celebrating Ram Mandir Bhoomi Puja? 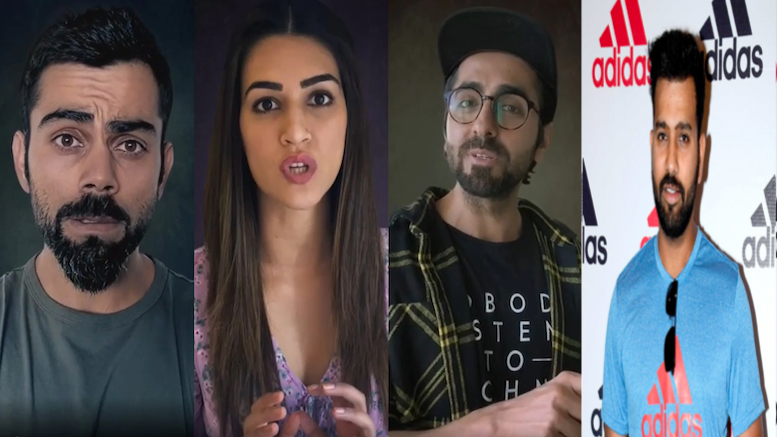 The Ram Mandir bhoomi pujan which took place on August 5th was a momentous occasion for all Hindus. It marked the culmination of a 500 year struggle to liberate one of our holiest sites which had been destroyed by foreign barbarians.

It was not just ordinary Hindus who were celebrating. Even Muslims like ASI’s KK Muhammed, Faiz Khan etc. who understood what Ayodhya meant for Hindus, and who were not in denial about how and why the disputed mosque was built after destroying a pre-existing temple, shared in the celebrations.

But one segment of society was conspicuous by its silence. Normally very quick to share greetings on festivals and special occasions, and to connect with the fans who have given them everything, our superstars from the cricketing world and Bollywood were no where to be seen on 5th August.

First, let’s see some of the exceptions. Virendra Sehwag has always been a straight-shooter – whether it was his simple ‘see ball, hit ball’ batting style, or his earthy insights. His feelings and opinions have always been heartfelt.

Other notable exceptions among cricketers who greeted people on the joyous occasion or at least alluded to it on their social media handles: Shikhar Dhawan, S Badrinath, RP Singh, Suresh Raina, Gautam Gambhir, Mohammed Kaif.

However, the man who set the bar in unabashedly expressing his feelings as a Hindu was Pakistani cricketer Danish Kaneria. Knowing the inhuman conditions in which Hindus live in Pakistan, under a fascist theocratic state that doesn’t bat an eyelid before liquidating dissenters, Kaneria’s tweet took great courage:

Today is the Historical Day for Hindus across the world. Lord Ram is our ideal. https://t.co/6rgyfR8y3N

Now let’s look at the Big 3 – the ones who grab the big money endorsements and whom the ordinary Hindu has propelled to superstardom: Virat Kohli, Rohit Sharma, MS Dhoni.

Virat Kohli was moved enough on 5th August to comment on the tragic explosion in Lebanon, but not so much by events closer to home:

Rohit Sharma was also silent on Bhoomi Pujan, and the double standards in his festival greetings are just too hard to ignore anymore – no greeting on a Hindu festival is complete without a cautionary sermon on environment or animals, but Eid is just a time for joy (no conditions attached)!

.@ImRo45 has to give gyan on Diwali, Holi but when it comes Eid …. 🤡 pic.twitter.com/YFH0UdEqBq

MS Dhoni too did not have anything to say, but to be fair to him he doesn’t seem to be much into festival and other greetings anyway. His last Diwali greeting on twitter was in 2014, and most of his posts are about family, endorsements or cricket.

However, non-cricketing sports stars like Saina Nehwal, Babita Phogat  had no such doubts or fears as our cricketers and openly embraced the Bhoomi Pujan

The proclivities of Bollywood are anyway well known and no one was expecting the openly left-liberal, Pakophile cabal to say anything remotely positive about the Bhoomi Pujan. For that matter, we have a fair share of Pakophiles in the cricketing community too led by likes of Manjrekar (big Imran Khan fan), Kohli (his cringe joke-cracking with Pakistani cricketers after a thumping defeat in Champions Trophy 2017 final still rankles) – and one can rest assured that BCCI will be back to organizing series with terroristan the moment a ‘secular’ govt is back in power.

Realizing that expressing their dismay/anger would just lower their already damaged image in the eyes of Hindus who flocks to their movies, the A-grade members of the Bollywood mafia like Karan Johar, Kareena Kapoor, Shahrukh Khan, Salman Khan etc held their tongues. But others like Shruti Seth who don’t have much to lose decided to vent their anti-religion feelings on the auspicious day –

Sadly an impossible one!

Almost all of Bollywood cosy club posted wishes on Eid. Absolutely fine.
But none of them posted wishes on Ram Mandir bhoomi pujan, biggest event of Hindu faith in centuries.
None of our cricket stars posted a single greeting either.
These are the men and women we worship.

The question arises: why is it important for Hindu Dharma and practising Hindus that the elites of our society publicly share our celebrations and momentous occasions? Well, their endorsement makes no difference to the ordinary Hindu who lives and breathes the lifestyle followed by his/her ancestors and who innately understands the value of Dharma, even more so in today’s chaotic world.

But the elites’ reluctance to identify with their roots due to anti-Hindu animus, apathy or a misplaced sense of political correctness is a troubling development because, like it or not, such icons do influence the young generation. So it becomes essential to call out their chicanery (whether intentional or not) and force them to openly declare their positions. Right now, we have allowed them to run with the hares and hunt with the hounds. They get fame and money from Hindu masses, but then subtly denigrate the same Hindus. Yes, many of them are victims of the same secular brainwashing that all of us are subjected to from birth – so, hopefully this criticism will serve as a wake up call and they take it in the right spirit.

Such deracinated elites fall in two categories: those who have an active anti-Hindu worldview, or those who are just sunk in their materialistic lives and have no original viewpoint but take their cues from PR handlers or whatever is ‘cool’ for their social peers. Both categories are dangerous, the former more so. But even the later will continue to take us for granted, unless we make them stop. And the most effective way to make them realize the error of their ways is to hit them where it hurts the most – their endorsements and brand image.

All of you support us with such fervour when we play for the nation. But now the nation needs you, me, all of us to play for it. Will you do your bit? #MatKarForward @TikTok_INhttps://t.co/uCXPEDyWgv pic.twitter.com/IVhzo8pyU5

Remember, this was the time when Tablighi Jamaat members were getting rightfully criticised for their disgraceful behavior in hiding from authorities trying to screen them for Covid-19, attacking & misbehaving with nurses, healthcare workers and police. Many genuine videos of Islamists licking currency notes, wishing for deaths of crores of Bharatiyas, claiming that Allah would protect them alone from Covid, or abusing and attacking health care workers in their localities had gone viral. This is exactly the kind of atrocious behavior our psuedo-seculars and left-liberals want us to erase from our memories, all to preserve ‘secularism’!

In fact, TikTok itself was attracting heat at the time for hosting all sorts of filthy short videos promoting sexual grooming, religious fanaticism,  animal cruelty and what not. But these four ‘youth icons’ decided to partner with TikTok to issue a public interest message! Just weeks later, TikTok was in the news when it dragged its feet over banning an ‘influencer’ found promoting acid attacks on the app – they finally took action after NCW got involved. By end June, GOI had banned the Chinese-owned TikTok and 58 other apps for endangering national security. Shouldn’t these four public personalities ensure that the ‘public interest’ message they made for TikTok is withdrawn? It is still visible on TikTok India’s YouTube channel.

Hindus face an existential crisis – we have been completely wiped out in Afghanistan, Kashmir, Mewat, places like Kairana in West UP, border districts of WB; our condition in Pakistan and Bangladesh is no different than what Yazidis endured at hands of ISIS. Not a day goes by when a Hindu in Bharat is not assaulted, sexually assaulted/exploited, converted or persecuted by the so-called ‘minority’. Our religion and deities are abused and mocked by ‘comics’ and students ‘activists’. We are not allowed to learn our own history in schools. Our laws and judiciary do not give us the same privileges extended to ‘minorities’.

And all our elites can think of is to lecture us, non stop, 24×7? Attach some or the other social cause with each and every of our festivals? Shame us and guilt trip us for our very existence? Enough.