Virat Kohli is an example of the driven & high-achieving, yet confused young Hindu 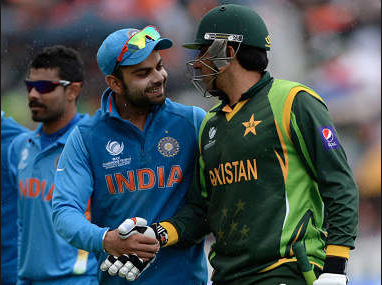 Viart Kohli is arguably the best cricketer Bharat has produced this century. His record across all formats of the game are already in ATG (All Time Great) territory, and his fitness & passion for the game will most likely ensure that he retires as the greatest Limited Overs batsman the world has ever seen.

Kohli is a passionate individual who wears his heart on his sleeve, and in many ways he is a true successor to the assertive style of play that was first introduced in the country by Saurav Ganguly. Before Ganguly took over as captain, the Indian cricket team of the late 80s & 90s had acquired a dubious reputation of being mild-mannered good guys who invariably wilted under verbal and psychological bullying on overseas tours.

It is no surprise that self-appointed guardians of the nation’s morality & eminent cricket-watchers like Ramchandra Guha find Kohli so abhorrent. To their colonized minds, the sight of a young, passionate Indian paying back bullies in their own coin is deeply upsetting and un-Gandhian.

Kohli has a lot of traits that are worth emulating for any young cricketer – intensity, ambition, adaptability, hard-work, never-say-die spirit. And a few that are not – over excitability, tendency to mouth profanities at the drop of a hat, reactive decision-making (especially harmful for the young players he is responsible for grooming as captain).

Like with so many cricketers in the post-Ganguly years, Kohli’s coming of age happened in his clashes with the champion Australians. The age-old Aussie tactic of verbal intimidation through crass, personal sledging and ill-tempered pack behavior in the field had acquired a veneer of respectability and the euphemistic title of ‘mental disintegration’ under Steve Waugh. It was Asian captains like Ganguly and Ranatunga who first started giving back to the Aussies as good as they got.

A country’s sporting culture is by & large a reflection of its social norms. And Australia’s abrasive, holier than thou playing style reflects the unwitting racism that infuses Australia, as cricket writer Malcolm Knox has explained so well.

So every right-thinking Bharatiya stood rock solid behind Kohli when he had his several duels with the Australians. The 2016 ‘brainfade’ series was especially bitter & clearly foretold Australia’s slide down the slippery slope of unethical behavior in pursuit of their ‘win at all costs’ mentality.

Till this point, we could say that Kohli reflects a new breed of young Hindus, who don’t carry the baggage of the past and take the world head on with total self-belief. Yet, centuries of self-alienation does leave its mark.

While Kohli gives back as good, sometimes even more, as he gets, he always plays the game in the right spirit. However, his recent action of sternly rebuking some Indian spectators having a go at Steve Smith for his involvement in the ‘sandpaper-gate’ ball tampering scandal, was odd. Kohli gestured the crowd to applaud Smith instead! Maybe Kohli is on an image-building exercise, but it’s one thing to support Steve Smith the player and quite another to moralize to your own countrymen especially when everyone knows how brutal Australian crowds are towards opponents. Tit for tat is a sound policy, in sport as well as in life.

But what has been most jarring is Kohli’s proclivity to be over-friendly with arch-rivals Pakistan. Now, before faux liberals start ranting against ‘hyper-nationalists who want to mix sports and politics’, let me make it clear that this is not a suggestion for Indian players to carry a grudge against all Pakistanis over the actions of the Pakistani state.

Sports is definitely not war. Albeit, even war has a certain protocol such as treatment of PoWs that Pakistan has repeatedly violated, not least in the barbaric treatment meted out to Capt. Saurabh Kalia during the Kargil war.

But sports is not completely cut-off from socio-political realities either. Sportspersons are after all citizens of a country and can’t be expected to act like robots without any emotion or sensitivity to socio-political realities. Imagine a Jewish team competing against a German one, at a time when the Nazis held sway in Germany – what demeanour would one expect the Jews to demonstrate on the field during such a match? How were the West Indies’ players who toured South Africa during the apartheid era, treated back home?

So why does a champion cricketer who plays tough but fair with other opponents, act out of character and try to manufacture bonhomie while playing with Pakistan?

Many cricket fans were disappointed at seeing images of Virat Kohli & Yuvraj Singh laughing with Pakistani cricketers after the crushing loss in the Champions Trophy 2017 final. And Kohli again seemed to be going out of his way to be nice to Pakistani bowlers like Mohammed Amir and Wahab Riaz during yesterday’s thumping win in the World Cup, despite neither player showing any interest in returning the favor and Amir instead aggressively sledging Indian players on a few occasions. And the final straw was when Kohli decided to walk off without even waiting for the umpire’s decision after he thought he nicked a delivery which was probably high enough to be called a no-ball – DRS later showed clear daylight between ball & bat. 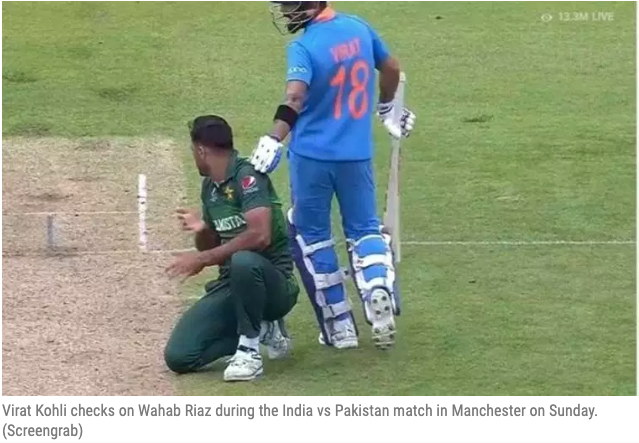 It is clear that Virat Kohli has a soft corner for Pakistan, and it can also be argued that his actions are driven by commercial considerations given his popularity among the cricket-watching public of Pakistan. Many a Bollywood star too have come out to woo their Paksitani fans, callously ignoring public sentiment back home after the latest Pak-sponsored terror strike or some other duplicitous act.

Bharat has long been a victim of Pakistani aggression and the Pakistani Army’s ‘death with a thousand cuts’ doctrine – thousands of our soldiers and civilians have died due to armed conflict and the more insidious Islamic terrorism emanating from Pakistan. Pakistan today stands discredited in the entire world as a hub of global jihad. The state-sanctioned brutal persecution & ethnic cleansing of Pakistani Hindus and other minorities like Pashtuns, Hazara etc has been repeatedly exposed on social media. This institutionalized, constitutionally & socially-endorsed discrimination against minorities in Islamic Republic of Pakistan is a fact of daily life.

Yet, urban, globe-trotting Hindus are largely unaware of this ugly reality of the Pakistani nation state, and still fall for the ‘assi-tussi diplomacy’ of the Aman ki Asha gang. Being able to crack a few jokes in Hindi/Punjabi and talk about shared cultural traits is fine, but the problem arises when one starts extrapolating from these fleeting personal encounters to advocating peace talks between both nations. The desire to be a global citizen conforming to Western Universalism can be hard to resist, but it can quickly cut you from your own roots.

The asymmetry in public discourse in Pakistan & Bharat can be seen in the subtle demonization by Indian intellectuals of a Gautam Gambhir for merely speaking up against cross-border terrorism, and the silence in Pakistan when cricketers like Sohail Tanvir and Shahid Afridi make anti-Hindu statements or when Ahmed Shehzad preaches Islam to a non-Muslim opponent on a cricket field. In a country like Pakistan where denigration of Hindus & glorification of Islam is part of school curriculum, radicalized adult mindsets are the natural outcome.

A Shahid Afridi pens a book in which he lectures Bharat on ending the ‘oppression’ of Kashmiris and paints Narendra Modi as a ‘divisive’ figure, and such rubbish gets traction in MSM of Bharat as well! In the aftermath of the Pulwama terror attack, the Indian team wore Army camouflage caps during an ODI against Australia, and for some reason this invited a strong objection from the Pakistan Cricket Board. Did PCB ever introspect on the growing Islamization of the Pakistan cricket team when group namaz and religious discourses by Tablighi Jamaat preachers became the norm?

We don’t want our cricketers to turn into churlish, foul-mouthed bullies when playing Pakistan, but we also don’t want them to bend over backwards to please a country which is destabilising the entire sub-continent. Please play the game like the thorough professionals you are, but also remember that you are ambassadors for the entire nation and be sensitive to the pain that fellow Hindus experience at the hands of the jihadi-military nexus that controls Pakistan.

Cricketwala
Cricket addict; interested in intersection of sports & cultures. Not the @cricketwallah