The Battle for Sanskrit: A Must Read Book For All Hindus 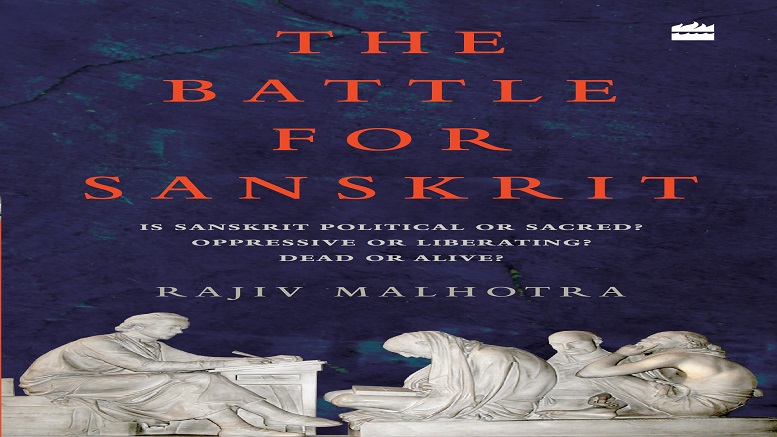 There is a new awakening that is challenging the ongoing westernization of the discourse about Bharat. An important new book “The Battle for Sanskrit” (www.thebattleforsanskrit.com) seeks to alert traditional scholars of Sanskrit and Samskriti – Hindu civilization ‑ concerning an important school of thought that has its base in the US and that has started to dominate the discourse on the cultural, social and political aspects of Bharat. The project that was launched by the British imperialists to legitimize colonialism has now moved to the elite American universities like Harvard and Columbia.

This academic field is called Indology or Sanskrit studies. From their analysis of Sanskrit texts, the scholars of this field are intervening in modern society of Bharat with the explicitly stated purpose of removing ‘poisons’ allegedly built into these texts. They hold that many Sanskrit texts are socially oppressive and serve as a political weapon of the ruling elite; that the sacred aspects need to be refuted or side lined; and that Sanskrit has long been dead. The traditional Bharatiya experts would outright reject or seriously question these positions.

As Aditi Banerjee articulates in this brilliant piece on IndiaFacts.org –

“Much is at stake.  Mere armchair activism will not suffice.  We have to assert ownership over our own traditions.  We have to study our traditions and define them for ourselves.  For, the core problem is not what Pollock and others are doing.  The core problem is what we ourselves have not done.  We have abdicated our responsibilities towards Dharma.  We have not preserved our Sanskrit manuscripts; we have not created classics libraries of our own; we have not written proper English translations of our shastras.” (emphasis added)

Why is this battle important?

“In this vacuum, in this complete absence of a Hindu ‘home team’ of scholars, it is inevitable that others would step in and take up the mantle we have discarded.  If we do not take up ownership of our own traditions, if we do not invest the resources to study and practice and preserve them, it is inevitable that others will rewrite our history and samskriti for us.  And in the process we will have lost that which is the most valuable to us, that which defines us and binds us together.”

What needs to be done?

“Hindus can no longer afford to be content with taking shortcuts to learn about Hindu Dharma from TV serials or Facebook posts or articles in the mainstream media.  We must delve deep into our tradition, into the primary sources, into the wonders of Sanskrit.  We must learn and experience for ourselves the great treasures of spirituality, philosophy, ethics and literary masterpieces bestowed upon us by our ancestors.  The battle for Sanskrit is on, and it is a battle we cannot afford to lose.” (emphasis added)

Here is a recommendation for this important book from a true Western Indologist Shri Koenraad Elst, who unlike Sheldon Pollock has also immersed himself in the Hindu way of life and experienced it first hand,

“Westerners consider themselves very progressive when meddling in Indian affairs. The values they now defend, such as egalitarianism and feminism, are different from what prevailed in the West during the colonial age, but the underlying spirit of “civilizing the savages” is the same. They now try to wrest control of Sanskrit studies from the “oppressive, reactionary” traditionalists, and increasingly succeed with the help of native informers eager for the status and money that Western academics can confer. Once upon a time, the colonizers brought prized artworks to museums in the West, claiming that these were safer there than in the care of the irresponsible natives. Now, their successors try to carry away the adhikara (prerogative) to interpret Sanskrit texts, so as to make Hindus look at their own tradition through anti-Hindu lenses. For the first time, Rajiv Malhotra analyses the stakes involved for Hindu civilization, which risks losing control over the backbone of its historical identity, and the power equation in the production of knowledge concerning Sanskrit and the Dharmic tradition. He proposes a research programme that Hindus will need to carry out if they are to face this sophisticated onslaught. This path-breaking book maps a battlefield hitherto unknown to most besieged insiders.

We request all Hindus to buy this book, recommend or gift it to your friends and family (especially young people), and donate copies to the nearest public library if possible. And if you wish to send us your reactions about the book, book reviews, or any thought on how it relates to what is happening today in society and politics, please send us your comments/articles at [email protected]

Shri Rajiv Malhotra is currently on a tour across Bharat to talk about the book “The Battle For Sanksrit”. The Bengaluru leg of the tour is already over, but he will be speaking at Chennai, Mumbai and Delhi in the next 10 days. This is a golden opportunity to understand why the Battle For Sanksrit is a battle we cannot afford to lose. See below for his upcoming speaking engagements –