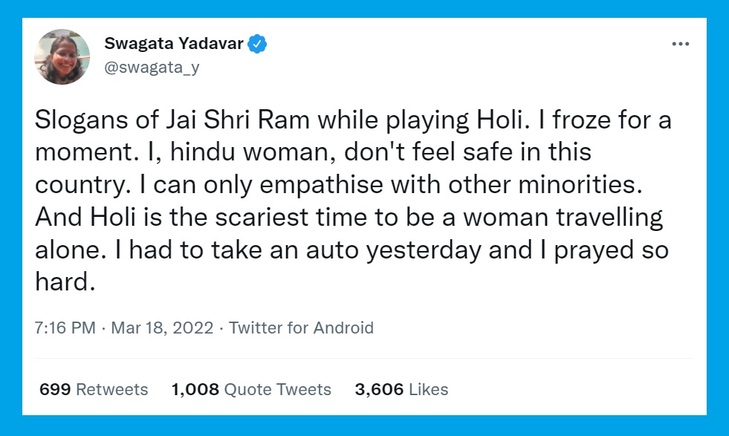 In an offensive Hindumisic/Hindudveshi tweet Swagata Yadavar, a former journalist of The Print, said she was scared of the Jai Shri Ram chant while adding that Holi was the ‘scariest time to be a woman’.

Attacking Hindu festivals and often linking them to “fear” is nothing new; it is a devious practice adopted by Islamo-leftist media personalities and pop culture celebrities, with HINOs (Hindus In Name Only) giving the “I’m a Hindu but I agree with the cabal” ammunition to guilt-trip Hindus. In recent years, this script has been played repeatedly.

In the earlier times, the Hindu festivals were connected to the “fear” for the “wellbeing of animals.” A celebrity’s imported breed dog shivering at the sound of firecrackers during Diwali to a stray dog with the Holi’s gulal, the fear theory has been peddled far too often in the name of animals, so much so that it has lost its appeal.

The Muslim-pandering anti-Hindu coterie has now plummeted to new lows where they have to manufacture the agenda of security concerns for women during Holi and have been trying to malign the magnitude of the Hindu festive, contorting and relegating it to a special day in the Hindu calendar that is perilous for women.

One of the earlier instances of this trend surfaced in 2018 when female students of Lady Sri Ram College took to Instagram to claim that “semen-filled balloons” were flung at them as a “mark of celebrating Holi.” These unverified claims were used extensively by the Lutyens media to further their Hindumisic agenda even before the test results of the forensic examination of the liquid on the clothes came out. Once the results were out, it completely smashed the fake propaganda by the students of Lady Sri Ram College.

The propaganda returns this year as a former journalist of The Print, Swagata Yadavar expressed her fear at the chanting of “Jai Shri Ram”, a religious saying not linked to any riots, bomb blasts, airplane hijacks, and most importantly, the beheading of any journalist and yet, like Mamata Banerjee Yadavar finds the holy chant ‘offensive’.

What exactly scared Yadavar? Why does she label the Hindu festival the scariest time to be a woman in Bharat? She doesn’t state that anyone chanting the religious chant approached her with unholy intentions or otherwise – then why the fear? The answer is simple – this fear is just a figment of her Hindu-hating brain that cannot stand the Hindus having a merry time together.

The anti-Hindu viewpoint that her job at The Print might have demanded, in addition to the overtly Abrahamo-leftist training these journalists receive, is wired into her psyche which is probably the reason why she starts imagining frightening things seeing a bunch of Hindus together, though none of them expressed any interest in her.

Imagining scary situations that don’t really take place can be indicative of a lack of mental wellbeing. In good faith, we believe Yadavar could do with some medical help to better her mental health. However, netizens were quick to shatter her Hinduphobic propaganda in minutes.

Faced with an array of powerful rebuttals and unable to satisfactorily reply to them, Yadavar did what liberal journalists are best known for – hit & run. She simply turned off her tweets’ reply section and restricted access to specific tweets to only those she followed instead of substantiating her claims with proof. She did attempt to defend her first ludicrous tweet with some more cringe-worthy reply that was easily rebutted by netizens.

Here we must stress that neither are all religions equal nor do ardent followers of those religions behave in the same manner. To begin with, we fail to recall the last time a “Jai Shree Ram” chanting mob tried to dictate what Hindu women must wear or tried to dictate on any other area of a woman’s life, be it marriage, career, or how she conducts herself. Even Sikhism demands that women cover their heads while entering a Gurdwara, but in Hindu Dharma, that is not a prerequisite for stepping inside a temple.

Further, it will be a mistake on moral grounds to even compare the “Jai Shree Ram” chanters with those who jump on women’s breasts, flog them, or shoot them dead while shouting Allahu Akbar only because their attire was not to the liking of these radicals.

The shameful treatment meted out to the mother and wife of Kulbhushan Jadhav destroys Yadavar’s tall claims about Pakistan’s hospitality. The Islamic nation compelled the two Bharatiya women to remove the bindi and Mangalsutra indicating the extent of hatred Abrahamics in general and Islamists in the particular harbor for the Hindu Dharmic symbols that they term ‘kafir’.

Yadavar would do well to remember that in December 2021, a Sri Lankan worker in Pakistan was tortured to death for an alleged act of blasphemy showing Pakistani ‘hospitality’. American journalist Daniel Pearl was abducted and decapitated in Pakistan; his severed head and the decaying body dismembered into ten pieces were buried about 30 miles (48 km) north of Karachi, and the disturbing video of his slaughtering was released as “The Slaughter of the Spy-Journalist, the Jew Daniel Pearl”. As a journalist herself, we wonder what Yadavar’s opinions on these matters are.

The abduction, rape, and murder/forceful conversions of Hindu females are regular occurrences in Pakistan. Of course, HINO Abrahamo-leftist journos only hear good stories about Pakistani hospitality because, like ostriches, they keep their heads firmly buried in the sand while labeling those questioning their Hindumisic views as ‘Islamophobics’.