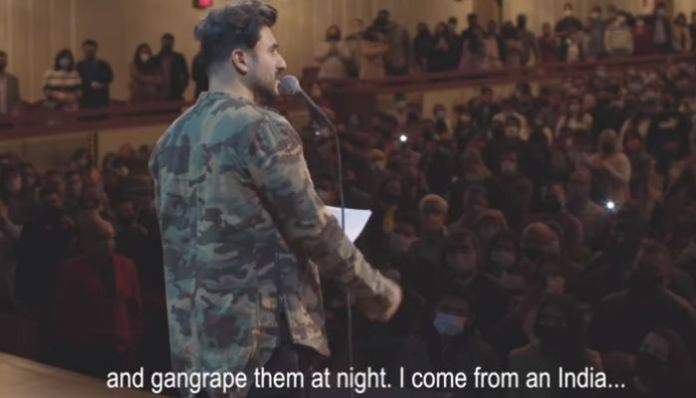 The proclivity of HINO (Hindu In Name Only) left-liberals to shame Hindus and Bharat in pursuit of self aggrandizement and while seeking approval of those they consider civilizationally superior, i.e. the West, is well known.

Yet another example of that phenomenon was provided by Vir Das, a self-declared stand-up comic, during a trip to the USA recently. In the video posted on YouTube, Das can be seen addressing an audience at the John F. Kennedy Center for the Performing Arts in Washington DC.

In the 7-minute monologue, Das spewed his entire spectrum of anti-Bharat invective, but saved his worst jibe for Hindus. “I come from a country where we worship women during the day, and gangrape them at night,” Das said.

Out of all major religions in the world, it is only Hindus who worship the feminine divine or shakti as Maa Durga, Saraswati, Parvati, Sita etc. So clearly the jibe is aimed at Hindus, because Muslims and Christian doctrine prohibits worshipping anyone other than the ‘one true God’ who is conceptualized as a masculine entity.

The very fact that Hindus worship female deities is so incongruous to the Westernized mind that they then try to start searching for ways to discredit that belief system. What better way than to contrast such worship, with crimes against women? Are crimes committed in the Western and Islamic world used to denigrate practicing Christians and Muslims in those countries?

Das’ “comedy” was full of other tropes denigrating Bharat and Hindus – most of it appears on the surface as a dislike for PM Modi, but actually betrays a visceral, almost subconscious aversion to Hindu Dharma and the Dharmic Bharatiya civilization. Ironically, the likes of Das who go about spreading negative stereotypes about Bharat also complain when they face racism in the West.

There is, however, nothing new in the trope used by Das. Several left-liberal celebrities have peddled the same propaganda about India being most unsafe for women or the ‘rape capital’ of the world. Hindu religion and festivals are routinely demeaned and denigrated to prove the point: ahead of Durga Puja, Hindus are mocked for ‘worshipping women for 9 days and raping them for the rest of the year’; before Holi, disgusting stories about semen-filled balloons being thrown at women are cooked up. Other Hinduphobic celebrities who have used the same “Hindus worship women, but also rape them” trope include closet-Islamist Mahesh Bhatt and his daughter Pooja.

Das ended his routine with – “But as I stand here before you, I am reminded that I represent a great people. Great people, who built a great thing (India) that is turning into a memory.”

What is this great thing (India) that Das is talking about? If you think it is the ancient Bharatiya civilization that has produced great self-realized sages, yogis, philosophers, kings & queens, scientists, mathematicians, linguists musicians, artists, sculptors – you would be sorely wrong. The civilizational memory of the likes of Das doesn’t extend beyond the last few centuries, and their fixation is with glorifying the India from 1947-2014, in particular the period spent under leadership of Nehru-Indira-Rajiv.

Yes, the same period when private industry was decimated, license raj and red tape ruled, a war and land was lost to China. A time when basic things like lack of sanitation and piped water, crippling electricity shortage, crumbling infrastructure was not part of political discourse, and only empty slogans were. That is the ‘golden age’ which our left-liberal HINOs pine for.

This self-alienation also leads the HINO to become blind to the obvious hatred which the terror-sponsoring Islamofascist nation of Pakistan nurtures for Hindus and Bharat. This leads them to trivializing the existential threat posed by Pakistan as a sort of juvenile arm-wrestle between teens that can be resolved over a cricket match and cup of tea. The HINO seeks acceptance from the liberal Western order above all else. So he/she is ready to dilute every bit of his identity, and turn a blind eye to the persecution of Hindus in Muslim-dominated regions, to fit into the liberal mould.

We have tolerated such sanctimonious Hindu haters for far too long. If they cannot respect the nation and society that has nurtured them, then the nation too must return the favour. Legal action must be initiated and other privileges of such activist-‘artists’ proportionately revoked to send a clear message that they cannot have their cake and eat it too.