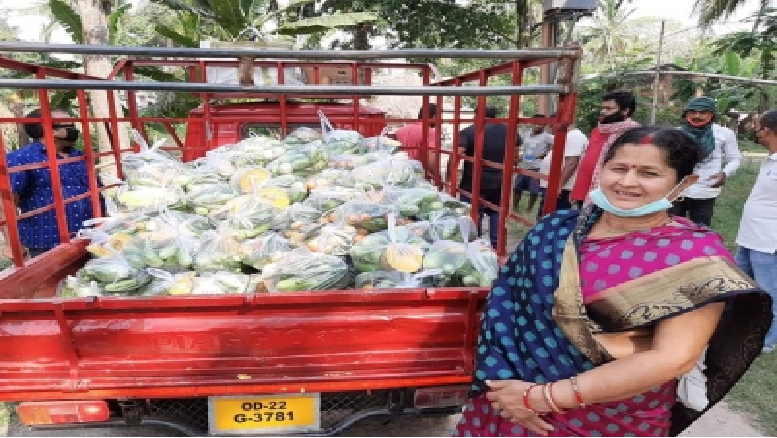 “All we need is money to eat and money to cover our skin. These are basic human needs. Other expenses can be taken care of. That is why I continue to help others without thinking too much about saving money for myself.”

These words by Chhayarani Sahu sum up her charitable side, one that she wears lightly despite being praised by Odisha Chief Minister Naveen Patnaik and former cricketer VVS Laxman, among others, on Twitter.

The 57-year-old farmer from Odisha shot to fame last year for distributing vegetables and milk to villagers who had lost their jobs due to the to lockdown – free of cost. She handed out 60 quintals of produce across 15 villages.

The decision to give away the farm produce for free was not easy. Her family used to make a profit of roughly Rs 2.5 lakh every year by selling vegetables. Moreover, Chhayarani had to sell most of her 20 cattle because of her poor health during the lockdown. This depleted their income further but the family decided to carry on the novel initiative.

The lockdown might be long over but Chhayarani continues to help others in need even today, thanks to social media. Her children have created a profile for her on Twitter to post appeals on behalf of the distressed families and find donors.

For instance, this January, Chhayarani urged netizens to raise funds for the surgery of a 30-year-old man who had fractured his spinal cord. She had shared the account details and contact number of the patient, but she doesn’t know if her intervention helped the man. But her son Manas, who operates her Twitter account, is happy to inform 101Reporters that “many directly reach out to the families in need”.

Dressed in a cotton saree and hair tied in a loose bun, Chhayarani says she used to help others even before the pandemic. “But my work got highlighted during the lockdown and people now know me. My responsibility has increased. I know I am just a farmer and I have several constraints. But I will continue to help others in my own capacity till my last breath,” she says while pottering around her family’s eight-acre farm in Kuruda village in Odisha’s Basudevpur block in Bhadrak district.

Farmers across the country suffered huge losses during the lockdown as the supply-chain had got disrupted. Then how did Chhayarani manage to feed her family and that of others in 15 villages in Odisha?

It so happened that Chhayarani and her husband Sarbeswar had harvested approximately 15 quintals of vegetables before the lockdown was announced on March 25 last year. With local markets shut, they had nowhere to sell their produce. That’s when Chhayarani thought that it would be better to distribute the vegetables among the villagers than let their hard work rot away.

“Vegetables are perishable [items] and we knew they would go waste in a matter of days,” Sahu recalls the tough decision she had to make.

With the help of her youngest son, a student who was visiting her from Bhubaneswar, she loaded the vegetables in an auto-rickshaw and drove to the neighbouring Ward 11 in the Basudevpur Municipality. As she went from house to house and witnessed the hunger and misery the pandemic had unleashed, she knew she could not stop what she had started.

“Four days into the lockdown, I was shocked to see the condition of the villagers. Many of them were daily labourers and the lockdown had snatched their income away. They had no money for food. My heart ached to see their distress. So I decided to help them throughout the pandemic,” she shares.

She would give vegetables from her farm in packets weighing 2.5 kg or more. These included tomatoes, brinjals, carrots, ladyfingers and other leafy greens. Occasionally, she would distribute oil or even milk reared from her cattle.

As their agricultural income plummeted, the family subsisted on the earnings of the elder son Santosh, who works in a company in Gujarat.

Manas, the younger son who’s just completed his MPhil, says, “My mother always had a soft corner for people in distress. She was born into a farmers’ family and is married into one. She has seen the difficulties [farmers have to face] and so she doesn’t want others to go through the same phase.”

The vegetable drive was going smooth until the monsoon arrived and their yield declined. “By then, our work had gained attention. People started showing up outside our door to seek help. We could not turn them away,” Chhayarani recalls.

That’s when Manas told her that they could post these pleas on social media to reach out to other good Samaritans. So far, the family has put up about 10 requests on Twitter.

Chhayarani now divides her philanthropy work between online and offline mode, besides toiling in the fields to grow food for her family and for others.

Most recently, she visited 19-year old Manas Jena from the Brahmanigaon village. He suffers from kidney-related ailments and needs money for operation. She documented his story on Twitter and attached his medical reports as proof.

However, she never goes empty-handed. “I always take some vegetables with me or some money, even if it is just Rs 1,000,” Chhayarani says.

She has close to 2,282 followers on Twitter, 1,266 friends on Facebook and many more admirers in her village and beyond. But she remains modest despite the fame coming her way.

“What else should I do? I am a farmer. I have to work every day. Of course I am happy to receive attention from people. But that doesn’t change anything. Instead, it is an added responsibility. I could have earned more profit by selling vegetables, but the satisfaction that I get now can’t be purchased with money,” she says.