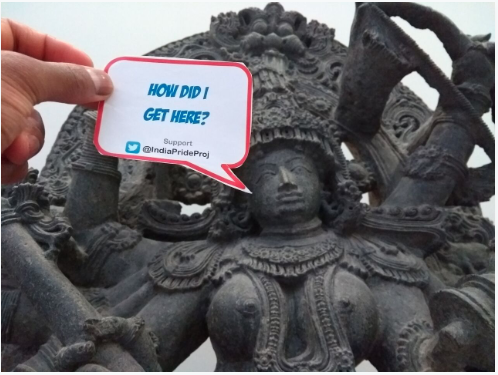 In a unique and unprecedented campaign, India Pride Project (IPP), a global network of heritage-enthusiasts have demanded that the UK return back Bharatiya heritage that has been forcibly extracted and moved to the UK.

In a novel protest, IPP volunteers scanned London based museums to capture “agony shrieks” from deities and statues themselves.

As a follow up, people of Bharatiya origin will reach out to a selected set of influential MPs (House of Commons) to make the moral case for heritage-restitution.

London-based volunteer with IPP, Pritesh Patel said, “I hope the act of returning stolen heritage will provide an opportunity for the British public to learn a bit about some of the wrongs that were committed in the name of the empire.” and added “I’m really optimistic of this project bearing fruit in the UK. India’s economic strength and global influence is rising. On the international stage, PM Modi is regarded as one of India’s most credible leaders to date and he is also a great supporter of reviving our ancient heritage. I therefore feel it will be difficult for the British establishment to ignore us. ”

Anuraag Saxena, a founder of India Pride Project said, “Segregation was all right till Rosa Parks came along. Melting ice-caps were acceptable till Al Gore took up the issue. We are making sure, the grab-and-go approach towards indigenous heritage, stops being acceptable from today.” In an article earlier this year, Anuraag Saxena wrote, “You can’t be proud of what your grandfather stole from mine.”

Commenting on the MP outreach program, Anuraag Saxena said, “There are 48 British MPs that represent constituencies with significant Persons-of-Indian-origin. We are confident these parliamentarians would not offend an ethnic minority’s sentiments who want to see their heritage go back home.”

Earlier IPP campaigns like #BringOurGodsHome and #SaveOurGods have been reported to be quite successful.

Heritage Restitution: The world in agreement

Earlier this year, French President Emmanuel Macron committed to returning Africa’s heritage. He emphatically stated, “I cannot accept that a large part of cultural heritage from several African countries is in France. African heritage can’t just be in European private collections and museums.”

The subject of European, especially British forced acquisition of world-heritage has been a subject of debate for decades. Christopher Hitchens, George Clooney, Bill Murray, Stephen Fry and numerous academics and intellectuals have made the case that Britain must repatriate heritage to where it was taken from; starting with the Elgin marbles (taken from Parthenon, Greece).

On Bharat-specific returns, former Minister Shashi Tharoor, author Rajiv Malhotra and activist Anuraag Saxena have all given talks/speeches in London appealing for the UK to take a moral stand.

For details: Email: buzz (at) ipp.org.in, or Tweet to: @IndiaPrideProj

This article first appeared on medium.com