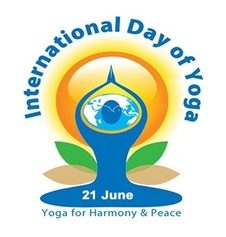 2014 is a momentous year for Bharatiya culture. It was the year that Mr. Narendra Modi took up office as the fourteenth Prime Minister of Bharat. Within the first six months of taking oath, on the 27th of September, Mr. Narendra Modi made a historic speech at the UN General Assembly. Calling for observing an International Day of Yoga, Mr. Modi made it clear that universal well being was the ultimate goal.

All scholars agree that Yoga has Indic origins. Every long-term Yoga practitioner would attest to the positive effects of Yoga. 177 out of the 193 member states of the UN supported the resolution for an International Day of Yoga (IDY). Since 2015, the world has been observing celebrating IDY on the 21st of June every year. This, in brief, is the background of the IDY.

This year’s IDY saw the involvement of more people than before. The rise in awareness of health benefits and spiritual progress is the main reason.

An important old University in South Bharat was the venue of an interesting seminar. The focus was on Yogic philosophy in the <insert name of local language> tradition. The department of philosophy at the said University was the organiser. The speakers/presenters at this event were from different backgrounds. The audience noted that some of the speakers did not practise any form of Yoga.

The head of the department (HoD) delivered the welcome address in broken English. He made a tall claim that yoga is a product of the <insert name of local language> tribal community. Referring to the Thirumanthiram (oops!), the HoD claimed that this is the earliest reference to Yoga in the world. At the end of his brief torturous talk, he invited an anthropologist professor to speak.

In her  rather unprepared speech, she summarily suggested that Yoga may have evolved through the tribe-caste continuum (TCC). The TCC is a hypothesis that the fluid egalitarian tribe system transformed into a rigid hierarchical caste system, especially in Bharat. This is usually parroted by anthropologists and sociologists to take a dig at the caste system. These “scholars” know not the difference between varna and jaati (more on this in a later article hopefully).

Before introducing the next speaker, the HoD made a tall unverifiable claim that Yoga was solely a therapeutic technique developed by tribals during the time of a famine when herbs were scarce. He further claimed that Yoga originated in <insert name of residing state>.

The next speaker, again a non-practitioner of Yoga, openly accepted his illiteracy in Yoga. He also expressed his pride in belonging to <insert name of residing state> for it was the birthplace of Yoga.

Hearing such baseless tall claims made in succession, this author could not tolerate such a non-scientific meeting. This author hurried away to save time and go pursue her own daily asana practice. Though the author missed attending the major part of the event, there are some takeaway lessons:

In conclusion, we must be eternally aware of the dangerous mischief (despite it all looking like an exercise in mediocrity , we must never underestimate the “dumb” looking externalities ) that such Breaking India Forces are capable of.