Loss of Purva Paksha tradition and its consequences 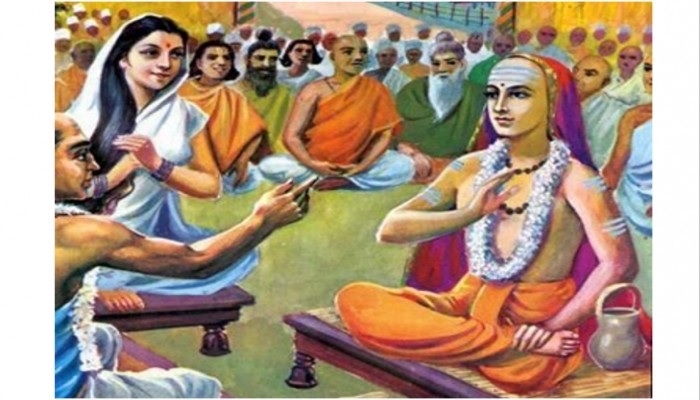 Purva paksha or the  study of  opponents in a dialogue or debate from their frames of reference so as to make an informed rebuttal is an ancient Dharmic intellectual tradition. Rajiv Malhotra reasons how the loss of the purva paksha tradition has led to serious civilizational and cultural trade-offs for Hindu (Sanatana) Dharma, which is being studied by Western Indology through the lens of Western Universalism.

The story of the  brilliant dialogue between Adi Shankara, scholar, seer and pioneering exponent of the Advaita School of Philosophy, and  Mandana Mishra, scholar and exponent of  the Purvamimamsa School of philosophy (whose focus is a ritualistic and literal interpretation of the Vedas) and his wife, the scholarly Ubhaya Bharathi, is well known.

In order to ensure an equitable debate because of the chasm  in the age  of the opponents,  Mandana Mishra requested that Ubhaya Bharati be appointed as the judge because of her sharp intellect. The dialectical engagement between the octogenarian Mishra and the young Shankara raged for eight days.

At the end of the period, when Mandana Mishra was almost ready to concede his defeat, Ubhaya Bharathi declared in the assembly that in order to defeat a man in debate, the opponent would  also need to defeat his wife, as she was his ardhangini or the other half.

“How can a sanyasi, who has no experience as a citizen, and a householder, claim complete knowledge?”

Deeply respectful of his opponent’s erudition and pertinent question, Adi Shankara replied that at that point of time he had absolutely no knowledge in this domain as he  was a sanyasi and therefore celibate. However, he requested his opponent to give him some time to  engage with the  question and then come back to re-engage in the dialogue. His worthy opponent agreed to his request.

Through his yogic powers of transmigration of the atma,  Shankara  entered into the body of an ailing king, experienced the life of a householder. Empowered with his new found knowledge, he returned to resume the debate. Needless to say, he emerged the  ‘winner’ thanks to his brilliant acumen, dazzling logic and scholarship. Mandana Mishra unhesitatingly chose to become his disciple.

Ubhaya Bharati revealed her  true form as the Devi Saraswati and disappeared, giving up her mortal body. She, however, granted him the boon that she would re-manifest at a place whenever he evoked Her. Shankara later set up the  Sri Sarada Peetam at Sringeri by invoking the Devi. Mandana Mishra was appointed the first Shankaracharya of the Sringeri Peetam.

This incident highlights the tradition of purva paksha or in depth study of the other or other schools of thought on their terms, that is central to dharma traditions.

Segueing nearly 2000 years later, ironically, this incident involves the controversial  Adi Shankara Chair in Hindu Religion and Philosophy that was to be set up at the Colombia University, in collaboration with NRIs in the US and the  official support of the Sringeri Peetam. Ostensibly,  it sought to represent and disseminate Shankara’s teachings in the  contemporary context. One of  the main players  who  was soon to be drafted into the think tank behind this initiative  was Sheldon Pollock, the controversial American Sanskrit scholar who controls the discourse of Hindu dharma in Western academia. Pollock was to head the Academic Committee who would select the scholar to occupy the position.

In his engaging book The Battle for Sanskrit, Rajiv Malhotra argues eloquently and elegantly about the need to  do  through  background check  and “kshetra analysis” of Hinduism studies before foolishly giving away centuries old parampara (lineage) and adhikara (authority) to “outsiders “whose only purpose was to misrepresent and distort sanatana dharma traditions. I wish they would not engage in aggressive campaigns to shift the adhikara from Indian paramparas (lineages) to new Western headquartered paramparas!”

“Just as Adi Shankara did in his time, we must fully understand the kshetra or space with which we are engaging—the academic kshetra of Hinduism studies in this case. This requires we do a purva paksha (systematic study of the opponent’s positions) of the state of affairs in the academic kshetra,” writes Malhotra.

In the same book, Malhotra recalls meeting with Sheldon Pollock during the Columbia Chair controversy. Pollock asked him, “How  could you think I hate Hinduism when I’ve spent an entire life studying the Sanskrit tradition? Only a person in love with the tradition could work so hard to understand it!”

Sheldon’s claims, Malhotra writes, is problematic at several levels. On the surface, a Westerner studying Sanskrit and Bhartiya traditions evokes wonder and awe among many people in our country. Long term investment in a tradition, he explains, is not necessarily premised on a love for the tradition.

“Colonial Indologists were among the most accomplished Sanskrit scholars of their time, yet their loyalty was to their own civilization. I agreed with him that obsequious Indian attitudes towards Westerners, especially western Indologists, were a colonial hangover for which he cannot be blamed. I emphasised that there was a difference between the study of the tradition as an outsider  versus that as a practitioner from within the tradition. I also explained to him that the tradition of purva paksha was central to the Bharatiya intellectual methods and this ought to be revived.”

Purva paksha is the deep engagement and study of the other—be it  a system of philosophy, thought or another culture—from their unique frames of reference. In terms of methodology, the dyadic traditional practices of purva paksha (examining the opponent’s position) and  uttara paksha (developing a considered response) have a tradition of several millennia. A demanding and  challenging process, it involves investing time and effort in exploring and appreciating the nuances of the opponent’s perspective, understand it from their frames of reference and also develop an informed response rooted in one’s own frame of reference.

According to Malhotra, the practice of purva paksha creates self-confidence in the one who undertakes it. If one undertakes a rigorous comparative analysis of the other, that one knows the other as well as the self, it is possible to provide counter arguments and refutations that are  impossible to ignore, deny or trivialize.

“More important, the uttara paksha or considered response is based on one’s frame of reference and on one’s  own terms. We then argue on equal terms and shift the us versus them debate on dharma terms,” explains Malhotra.

All systems of philosophy and thought in the dharma tradition such as the different schools of Vedanta, Buddhism, Jainism and Mimamsa have done purva paksha on each other thoroughly and thus understand each other’s perspectives with clarity and depth.

“I am the symbol of what the problem is. Me. The reason being I am speaking to you in English about Sanskrit! The study of Mandarin is done in Mandarin; not English! The study of Arabic is done in Arabic; Persian in Persian!  Among the old civilizations and languages, ours is the only one which is studied from the outside; not inside! And we are so proud that Westerners are studying us, unaware  of their implicit reasons for doing so!” remarks Rajiv Malhotra with a touch of irony.

Paradoxically, Western Indologists have in fact undertaken a purva paksha  of our traditions. However, it was lopsided and based on incompatible frameworks under the overarching lens of Western universalism.

“The gradual erosion and loss of the purva paksha tradition implied that inter-civilizational discussion moved over to  Western frames of reference. Incompatibility in vocabulary and grammar between Sanskrit and English led to  inaccurate and misleading translations. The essential non translatability of certain dharmic concepts such as atma further complicated the  issue. The loss of purva paksha tradition led to gradual loss of self-confidence, pride, knowledge and power. The civilizational trade offs have been serious, despite superficial concessions such as writers from Bharat who win international literary prizes and our love for cricket! It made for a gradual cultural and civilizational take over. If you fight an enemy on their turf, the advantage is theirs!”  says Rajiv Malhotra, who  says his Western and Bharatiya background helps him do purva paksha  that is contextually relevant and responsive to contemporary realities.