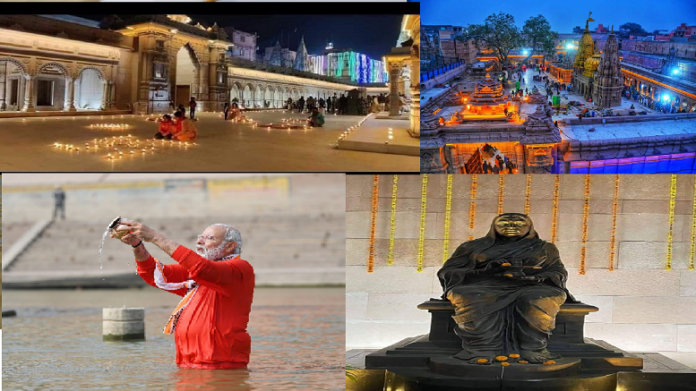 The temple, till now, was ensconced in the tiny lanes of Varanasi and access to the same was invariably a problem — especially on special occasions when the crowds swelled. The temple lacked direct visibility from the Ganga River.

The 20-25 feet wide corridor that will be formally inaugurated on Monday, will connect Lalita Ghat on the Ganga to the Mandir Chowk in the temple premises.

Devotees can take a dip in the holy river and offer prayers to Lord Shiva in the temple from there itself.

The temple now has an area of its own with a giant courtyard.

While the renovation of the Kashi Vishwanath temple remains top on the list of the projects completed in the Prime Minister’s constituency, the Rudraksh Convention Centre that is designed like a Shivalinga with a seating of 1,200 people, with 108 Rudrakshas on its facade, is another major highlight.

The building form and philosophy behind this Convention Centre is inspired by Kashi’s tradition of people-friendly spaces.

With modern facilities like divisible meeting rooms, art gallery and multi-purpose pre-function areas, the place provides opportunities for artists to showcase themselves and interact with the people as well.

The Prime Minister, as MP of Varanasi, has also ensured increased connectivity in his constituency.

The Godowlia Multi level parking, Panchkosi Parikrama Road (for pilgrims), Ro-Ro Vessels for tourism development on Ganga River and three-lane flyover bridge on the Varanasi-Ghazipur Highway, Rs 111.26 crore for constructing 47 rural link roads of 153 km, Lahartara-Chaukaghat flyover replete with a food court and open cafe, road connecting Babatpur airport to the city have given a new identity to Varanasi.

The Ring Road, with two rail overbridges and a flyover, will allow traffic on NH 56 (Lucknow-Varanasi), NH 233 (Azamgarh-Varanasi), NH 29 (Gorakhpur-Varanasi) and Ayodhya-Varanasi highways to bypass Varanasi, thereby reducing traffic congestion in the city.

The Ring Road will provide convenient access to Sarnath, an important site for Buddhist pilgrimage.

The much needed 6-lane widening project of the Varanasi – Prayagraj section of NH-19 has also been started, and this widening will significantly reduce congestion and traffic for vehicles plying towards Varanasi.

Besides this, Varanasi has seen overhaul and upgrade of the sewage system with the installation of online effluent monitoring systems and SCADA automation at ghats and sewage pumping stations to ensure that actionable information is available at all times.

An Integrated Command and Control (ICC) Centre for traffic and police management system, and medical emergencies has also been operationalised.

Additionally, 3,000 CCTV cameras have also been installed at critical points across 720 locations to ensure smart policing and make Varanasi much a safer place for pilgrims and residents alike.

Varanasi has been provided with ‘smart signages’ with Quick Response (QR) code. These signages give information to visitors and tourists alike about cultural importance of heritage sites and the 84 iconic ghats of the city, which are known for their antiquity and architectural beauty.

Sculpture signages have also been installed at the Assi ghat and Khidkiya ghat, providing information about various events like Ganga Arti at Dashashwamedh ghat, annual Naag Nathaiyya event at Tulsi ghat. The smart signage at Manikarnika Ghat and Harishchandra Ghat, where last rites of people are performed, is meant for people to know about the traditional rituals of these ghats.

Varanasi is emerging as one of the biggest medical hubs of Purvanchal. The two cancer hospitals — Pandit Madan Mohan Malviya Cancer Hospital and Homi Bhabha Cancer Hospital — provide comprehensive treatment to the patients from Uttar Pradesh, and nearby states of Madhya Pradesh, Chhattisgarh, Jharkhand and Bihar.

The Deen Dayal Hastkala Sankul — a trade facilitation centre for weavers, craftsmen and artisans of Varanasi in 2014 and in 2017, provides a marketing platform to weavers and artisans.

The Manduadih railway station in Varanasi has been revamped into a world-class station. Equipped with the latest amenities like air-conditioned waiting lounge, stainless steel lounges, LED lights, the station also has a cafeteria, food court, booking and reservation office, waiting rooms and more.